By Zhao Jinzhao and Wang Xintong 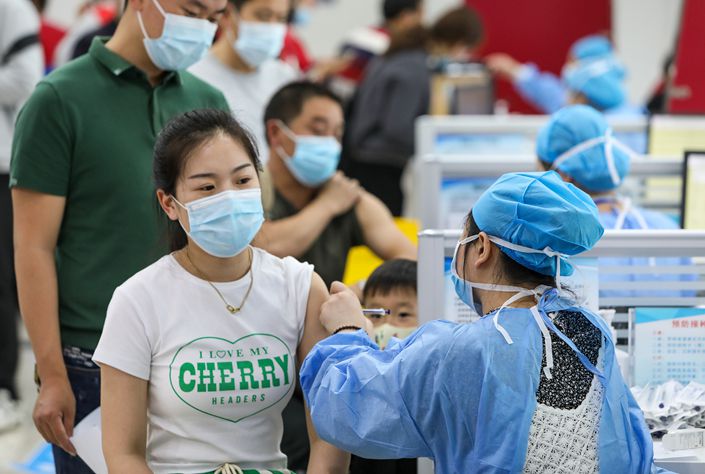 China has administered more than 100 million doses of Covid-19 vaccines in recent days as the country’s vaccination drive shifts into high gear to hit the target of inoculating 40% of the population by the end of June.

Mi Feng, a spokesperson for the National Health Commission (NHC), said at a press conference Thursday that a total of around 450 million doses of Covid-19 vaccines had been administered across China so far.

He said China’s daily inoculation rate is continuing to expand, hitting 15.05 million doses on Monday. More than 100 million doses were administered in the eight days to Wednesday, Mi said.

The population billionaire’s mass vaccination drive is accelerating after a slow start. It took 25 days for the country to reach the 200 million milestone after passing the 100 million mark in late March. It took a further 16 days to get to 300 million and then just nine days to pass 400 million, according to NHC data (link in Chinese).

Wealthy megacities such as Beijing and Shanghai have recorded higher vaccination rates, offering a range of incentives to residents who get a jab. In the Chinese capital, more than 15 million people have received at least one Covid-19 vaccine shot, including over 80% of adults. A total of 71% of the city’s 21.8 million residents had received a full course of vaccinations, according to Caixin’s calculations.

Meanwhile, more than 21 million doses had been handed out to Shanghai’s 26 million residents as of Saturday.

Authorities in Dalian, a port city of 6.7 million people in Northeast China’s Liaoning province where a Covid-19 flare-up linked to cold chain transportation emerged late last year, announced Tuesday that a barrier of immunity had been “basically built.” Over 60% of permanent residents had received at least their first dose, they said.

The eastern province of Anhui, where seven locally transmitted coronavirus cases were recently detected, had administered more than 11 million doses to its over 60 million residents as of Sunday, with the average daily doses over the past week growing to top 840,000.

The province’s residents received nearly 1.2 million doses on Sunday, marking its highest ever daily doses, as the flare-up sparked greater willingness to get a vaccine.

Earlier this week, Shao Yiming, a researcher at the China Center for Disease Control and Prevention (China CDC), said, “I believe our goal to reach herd immunity will be achieved this year.”

However, a county-level disease control worker told Caixin that reaching the 40% target would be relatively easy, but it’ll be hard to push that figure even higher.