By Ingrid Luan and Sun Liangzi 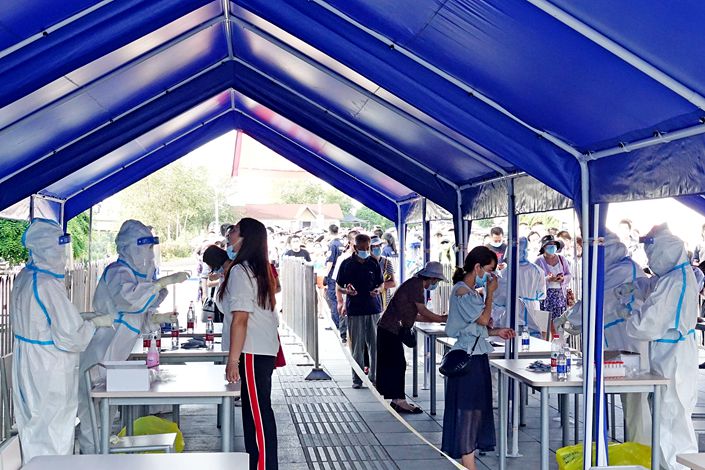 The northeastern port city of Dalian has begun mass testing of its residents amid the country’s latest coronavirus flare-up, in which most cases so far have been linked to a local seafood importer.

The municipal health authority (link in Chinese) of the city of 6 million reported 14 new locally transmitted cases on Monday. That brought the total number of confirmed cases to 38, of which 30 are either employees of Dalian Kaiyang World Seafood or their relatives.

Zhao Lian, deputy director of the municipal health commission, said at a press conference Monday that samples have been collected from about 1.68 million residents. Cases linked to Dalian have already spread to seven cities as far away as the southern province of Fujian, she said. The first case was reported last Thursday, ending a 111-day streak without any cases in the city.

At the request of Vice Premier Sun Chunlan, National Health Commission (NHC) director Ma Xiaowei arrived in the Liaoning province city on Friday to coordinate resources to enable the city to provide nucleic acid testing to its residents this week, according to a statement (link in Chinese) released by the NHC on Sunday.

Fears are mounting over global cold chain transportation as the outbreak in Dalian is the latest to be apparently linked to imported frozen seafood. Previously, samples taken from the packaging of Ecuadorian shrimp products in Dalian and the Fujian city of Xiamen tested positive for Covid-19 on July 3, according to China’s General Administration of Customs.

During the Covid-19 resurgence in Beijing last month, traces of the virus were also found on chopping boards used to cut imported salmon. China has halted meat imports from a total of 23 food producers including Tyson Foods in the U.S. since July 10.

Despite regional flare-ups, the country is continuing to resume activities put on hold earlier this year when China became the first country to grapple with a coronavirus epidemic. The top flight of domestic soccer, the Chinese Super League, kicked off in Dalian on Saturday after all of the players tested negative for Covid-19.

China on Monday reported 57 local infections, the highest number in more than four months, with 41 in the far western region of Xinjiang and the rest in Liaoning and neighboring Jilin, according to a NHC statement (link in Chinese).

In order to prevent any regional outbreak turning into a second national epidemic, China has been following a response handbook that includes mass nucleic acid testing. Wuhan, where the coronavirus first emerged late last year, was declared free of virus after blanket testing covering the entire population of 10 million found no confirmed infections.

In Xinjiang’s capital Urumqi, which has recorded 254 cases since mid-July, a similar testing campaign for its 3.5 million residents is nearing completion. However the city on Sunday launched a second round of nucleic acid tests for residents in high-risk districts to ensure more accurate coverage, regional health commission chief Zhang Wei said at a Saturday news briefing.