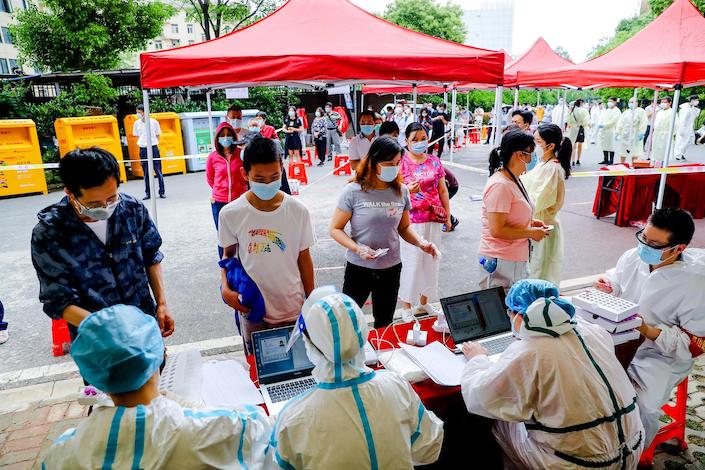 People line up to get nucleic acid testing May 16 in Wuhan.

Officials in Wuhan declared the city safe as a blanket testing campaign covering the entire population of 10 million found no confirmed infections, indicating that the deadly coronavirus may have been eradicated from the pandemic’s first epicenter.

The central China metropolis launched massive nucleic acid testing for 9.9 million residents between May 14 and June 1 in an aggressive effort to eliminate hidden transmission chains. No infection was confirmed, although 300 people tested positive without showing any symptoms, the public health authority in Hubei province said Tuesday at a press briefing.

None of the asymptomatic people was later confirmed as infected nor proved to be infectious. All of the 1,174 people who had contact with them tested negative for the virus, officials said. Lab studies on 106 virus samples from the asymptomatic cases found the virus was inactive, according to Li Lanjuan, an expert at the National Health Commission.

Wuhan, the Chinese city worst hit by Covid-19, is now the “safest city,” said Feng Zijian, a deputy director of China's national Center for Disease Control and Prevention (CDC) at the briefing. Since Covid-19 emerged in December, Wuhan recorded 50,340 Covid-19 infections, 60% of the national total. The city was placed under drastic lockdown for nearly three months and suffered an overwhelmed health-care system.

Although the Wuhan lockdown was lifted in early April after the outbreak was under control and daily new infections fell to near zero, city dwellers still found it difficult to travel around or faced ostracism on fears the virus lingered.

On May 11, Wuhan authorities announced the testing blitz, making it the first major Chinese city to roll out mandatory testing for every resident. Deputy Mayor Hu Yabo said the testing restored confidence in Wuhan and will help the city, a central Chinese industrial hub, to return to normal.

“There is little possibility that people will contract the virus (in Wuhan),” Li said.

Zhang Dingyu, president of Wuhan Jinyintan Hospital, said all samples that tested positive or were suspected of being positive were reexamined. In addition, 35,961 samples were picked randomly for retesting to ensure the accuracy of the tests. None of the samples showed different results Zhang, said.

“The data fully indicated that Wuhan and people in Wuhan are safe,” Li said. “The city has largely returned to normal.”