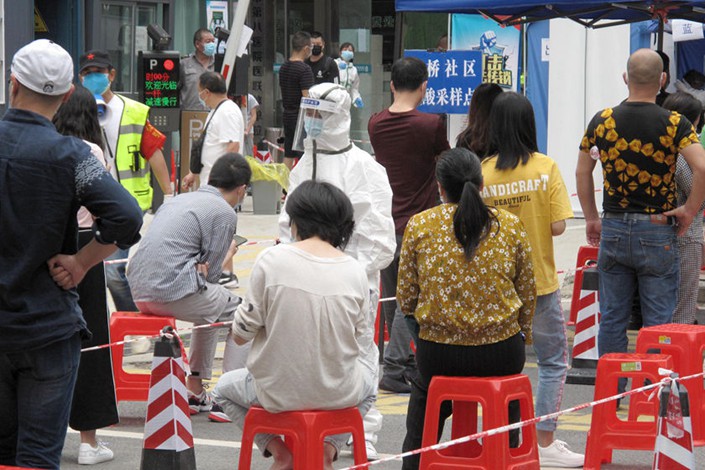 Wuhan residents line up to be tested for Covid-19 on Wednesday.

Authorities in Wuhan have found more than 200 asymptomatic cases of the new coronavirus since launching an ambitious plan earlier this month to test all of the city’s approximately 11 million residents.

As of Saturday, the central Chinese metropolis had conducted 6.68 million so-called nucleic acid tests (NATs) and discovered 206 asymptomatic cases across more than 10 districts, according to notices from the municipal health commission. Disease control authorities announced the initiative on May 11, making Wuhan, where the pandemic erupted last year, the first major Chinese city to roll out mandatory mass testing.

The new cases underline the difficulties of restoring normal life in disease-hit cities. Although asymptomatic patients don’t get sick with Covid-19, the deadly disease caused by the coronavirus, they can still spread the pathogen to others.

The risk of asymptomatic cases have drawn the Chinese leadership’s attention. On March 30, Premier Li Keqiang stressed that the nation must prioritize control and prevention of those showing no symptoms.

Zhang Wenhong, a top epidemiologist at Huashan Hospital of Fudan University in Shanghai, said in an article posted on social media that based on his team’s research, 18% to 31% of all infected cases are asymptomatic.

This means that two to four of every 10 infected cases are asymptomatic, he said. Those who are infected but develop very light symptoms could also be identified as asymptomatic cases for calculating quarantine periods.

Aimed at preventing a resurgence of new infections, Wuhan’s testing capacity has skyrocketed from 42,000 NATs conducted on May 12 to a high of 1.47 million on Friday, according to Wuhan Deputy Mayor Li Qiangzeng.

A staff member at Wuhan’s disease control center, who requested anonymity due to the sensitivity of the issue, told Caixin that logistical problems combined with the less-than-perfect accuracy of the tests made it hard to know for certain how many people in the city had the virus. However, mass testing in itself “definitely has advantages for controlling the spread of the disease,” they said.

A notice published Monday on the Wuhan Municipal Health Commission website said the testing program was moving into its final stages and urged all untested residents to register with community authorities by 5 p.m. Tuesday.

However, the so-called “mixed testing” approach that has allowed authorities to test on a mass scale in Wuhan has drawn questions about the efficiency of identifying infected cases. Under the approach, up to 20 samples gathered by nose or throat swab will be mixed together. If the mixed sample tests positive, then each one of the 20 people will be retested individually to identify which were infected.

Another issue with the mixed testing approach is that the concentration of the sample would be diluted, which could hurt the accuracy of the results.

Like the rest of China, Wuhan, the epicenter of the coronavirus outbreak in China, has brought its outbreak under control in recent weeks, with daily new infections falling to near-zero.

Last month, the city revised its official coronavirus death toll upward by 50%, citing missed deaths at the start of the outbreak. Some observers have expressed doubt about the accuracy of the official figure, which stood at 50,340 confirmed infections and 3,869 deaths as of Sunday, according to the municipal health commission.

Nationwide, the coronavirus has infected more than 80,000 people and killed more than 4,500, according to official data.