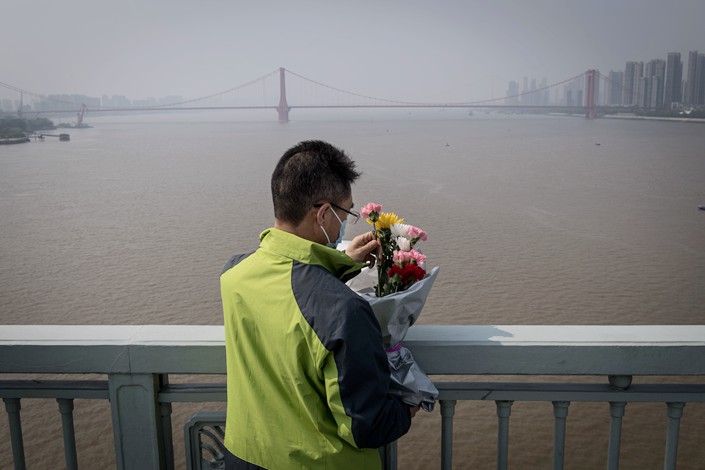 A resident prepares to throw flowers into the Yangtze River from a bridge in Wuhan to honor the dead on April 4. Photo: IC Photo

Wuhan on Friday revised upward its official death toll from the coronavirus outbreak by 50%, citing missed deaths at the start of the outbreak.

Authorities in the city of 11 million people, where the virus was first detected late last year, added 1,290 deaths, bringing the total to 3,869. The Hubei province city also adjusted the number of confirmed Covid-19 cases upward by 325, bringing the total to 50,333 as of the end of Thursday, according to a notice from Wuhan’s disease-control task force published on the website of the state-run Xinhua News Agency.

The notice said the revisions were made to include many people who died at home during the start of the outbreak as Wuhan’s overwhelmed hospitals were unable to treat everyone presenting with symptoms. High pressure on the city’s medical workers to rescue sick patients at the peak of the epidemic also led to many cases being missed, filed late, or misreported.

Additionally, a “small number” of health care institutions treating the city’s Covid-19 patients were unable to connect with the wider epidemic response network in a timely manner, largely due to many hospitals being designated as Covid-19 treatment centers over a short period, the notice said. Some deaths were also incompletely registered, misreported, or duplicated, it added.