By Ding Jie, Bao Zhiming, He Jingwei and Han Wei 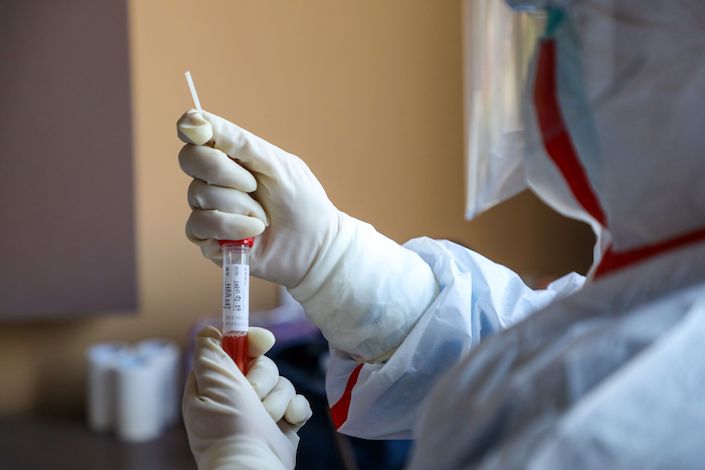 Wuhan is setting out to test the entire 11 million population of the central China metropolis where the Covid-19 pandemic first emerged after new infections appeared more than a month after the city ended a lockdown.

District officials in the city confirmed with Caixin that they received orders to submit plans to arrange nucleic acid tests for all residents under their purview.

“City authorities required the tests to be completed within 10 days, but detailed requirements and measures are still under discussion,” said a public health official at the Hongshan district, the most populous section of Wuhan with more than 1.5 million residents.

The ambitious plan reflects China’s determination to prevent a resurgence of the virus as the economy reopens. Wuhan reported a cluster of six new cases among local residents May 10 and 11, the first infections since the city lifted its three-month lockdown April 8. Wuhan had gone 35 days with no new cases.

Carrying out universal nucleic acid testing in Wuhan would cost as much as 1.8 billion yuan ($254 million) and would require rapid expansion of testing kit supply and lab capacity. Although health experts have suggested expanding testing as businesses resumes, some said testing for everyone might not be necessary.

Wuhan had 11.08 million registered residents in the 2018 census. The city’s health commission April 29 said about 1.03 million people in the city had already received testing. Conducting tests on the remainder of the population over 10 days would require daily testing capacity for about 1 million people.

As of April 19, there were 53 institutions that can run nucleic acid tests in Wuhan, along with 211 testing sites for taking samples, according to Wuhan Deputy Mayor Li Qiang. Daily testing capacity in the city reached 46,000 people a day.

Since the recent cases in Wuhan were all in the same community, expansive testing could be carried out in the neighborhood, but there is no need to test everyone, said Wu Zunyou, chief epidemiologist at the Chinese Center for Disease Control and Prevention (CDC) Tuesday in an interview with the state broadcaster.

“Massive testing should focus on the most susceptible groups and areas,” Wu said.

Another CDC expert said blanket testing will be more costly than effective, partly because of the relatively low infection rate in China and reliability issues for single tests. Experts have recorded many cases of patients who had multiple tests but were later confirmed to be infected.

Sources said the city government’s decision to test everyone might also be because a recent epidemiological study found a higher-than-expected infection rate in the city. An April survey of blood samples of 11,000 people in Wuhan found antibodies in 5%–6% of the samples.

Wuhan will continue efforts to enhance screening and infection tracing to prevent resurgence of the disease, the Wuhan Health Commission said Sunday in a statement.

All districts in Wuhan were ordered to work out plans to implement universal testing and submit them by noon Tuesday, according to a document issued by the city government’s Covid-19 control taskforce viewed by Caixin. The document called for district authorities to test all residents and migrants in their areas, with a priority on vulnerable groups and residential complexes with high density.

Several community officials told Caixin that they were in intensive discussions about how to carry out the tests. Liu Qiongxiu, a community chief at Jiangan district, said the workload will be immense.

Caixin learned that all people except those who took a nucleic acid test in the past seven days will be required to take a test. To manage the high demand, districts will start testing on different days, and each will be given 10 days to complete the task, according to an official at Wuhan CDC.

Private institutions will take a major part in conducting the tests with support from public hospitals and disease control departments, the official said.

Businesses were surprised by the decision to test everyone, although many have discussed massive implementation of the faster antibody tests, Zhang said.

The city government has yet to explain how the massive nucleic acid testing will be financed. According to provincial rules, 90% of the expense will be covered by public health insurance for hospitalized patients and suspected patients who take the test at designated institutions. Currently, the cost of a nucleic acid test, including test kits and services, are capped at 180 yuan ($25.40) in Hubei province.