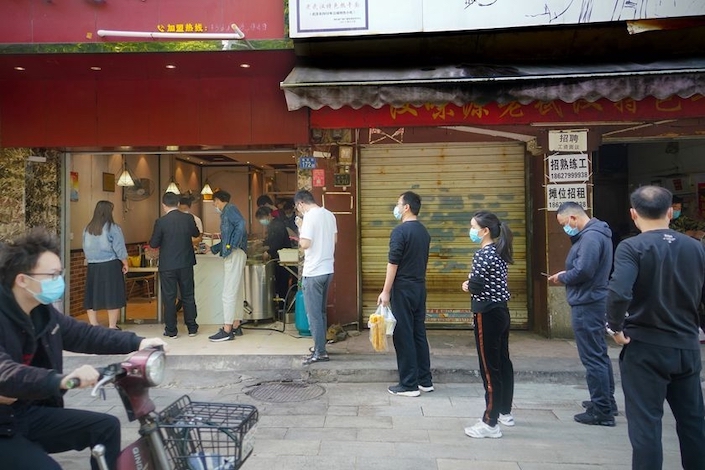 Residents line up to buy breakfast in Wuhan. Photo: Caixin

Wuhan, the epicenter of the Covid-19 outbreak in China, Monday reported its first cluster of new cases since the city’s lockdown was lifted a month ago, leading to the removal of an official and an upgrade of the risk level from low to medium in a district of the city.

Six new cases were confirmed Sunday and Monday in the same residential compound. One was the wife of an 89-year-old man who was reported Sunday as the first confirmed case in the city in more than a month. The four others – a couple in their 70s and two women younger than 50 – were reported having had no contact with the first family.

The new cases in Wuhan raised concerns of a wider resurgence as businesses restart and people resume normal activities across the country. Some cities in Northeast China’s Jilin, Liaoning and Heilongjiang provinces are also now on high alert and put residents back into lockdown after the emergence of clusters of new cases.

Health experts tested all the residents in the Wuhan compound after the 89-year-old man was confirmed and found the five others as asymptomatic, meaning they tested positive for the virus and were capable of infecting others without showing symptoms.

Now the compound has been locked down again. At the peak of the outbreak, the compound had had a total of 20 confirmed cases. It has been an “epidemic-free community” since March 15. Health experts are still not sure how the resurgence started in the community since the 89-year-old man in the first case hadn’t set foot outside the compound since the Chinese New Year in late January.

The Communist Party official in charge of the community was removed from his position for poor lockdown and control management, according to the website of the local government.

The compound was built in the 1980s with more than 4,900 residents in nearly 2,000 households. Nearly half of the residents are migrant tenants. The compound has multiple entrances without gates, and ground-level units facing the streets are retail shops.

China does not include asymptomatic cases in its official tally of confirmed cases, now at 82,918, until they exhibit signs of infection.

Hundreds of asymptomatic cases are being monitored in Wuhan. From April 8–15, the city conducted 275,400 tests, mostly on highly susceptible groups, workers back to work and migrant workers leaving the city. It turned up 182 asymptomatic cases, according to local state media.