In Depth: Controlling Covid-19 May Become Ongoing Game of Whack-a-Mole 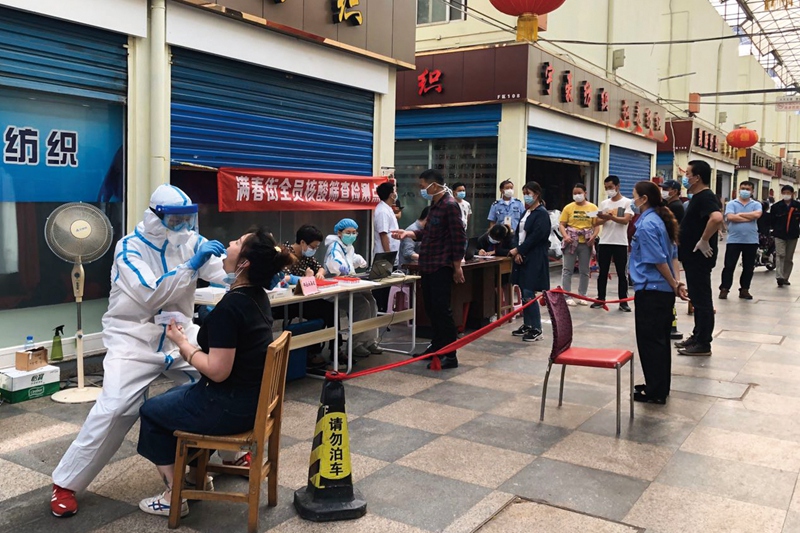 The world is watching China for clues to how long the Covid-19 pandemic may last and lessons on how to return to normal life after months of lockdown. So far, it’s a discouraging picture.

Wuhan, where the outbreak first emerged and hit hardest in China, reported a new cluster of cases a month after the lockdown ended, prompting the city to embark on the ambitious task of testing the entire population of 11 million in 10 days. Meanwhile, several northeast cities are back to lockdowns after new infections emerged.

The sporadic new outbreaks are not likely to stop China’s gradual reopening of the economy, underway since March. But continuing the resumption of commercial and social life will require balanced actions to keep the new cases from developing into a resurgence while reviving the economy under new, more pervasive and innovative epidemic control policies, public health experts say.

“It’s now proven that the epidemic has a very long tail,” said Wu Zunyou, the chief epidemiologist of the Chinese Center for Disease Control and Prevention (CDC). Moreover, the search for effective treatments and potential vaccines is turning out to be more difficult than hoped, making it nearly impossible to eradicate the virus in the near future, Wu said.

It’s growing increasingly likely, scientists say, that the coronavirus is here to stay. People will have to get used to living with it, and governments must learn to control the virus while continuing economic activities. The Covid-19 contagion may simply join the mix of viruses that kill people around the world every year, epidemiologists are starting to say.

“I think it is important to put this on the table: This virus may become just another endemic virus in our communities, and this virus may never go away,” said Mike Ryan, executive director of the World Health Organization’s health emergencies program, at a media briefing May 13 in Geneva.

Feng Zijian, deputy director-general of China’s CDC, compared the need to control the virus to the 40-year-old Japanese arcade game Whack-a-Mole, in which moles pop unpredictably out of holes in the game table and the player’s task is to hit them with a mallet. Timely detection and rapid response are the key strategies for prevention and control, he said.

That’s what seems to be going on now in China, South Korea and Germany, all of which seemed to bring the pandemic under control only to have new outbreaks pop up.

Northeastern Heilongjiang province emerged as a recent hotspot for new cases in China. Last month, more than 90 people were infected and several died in a hospital in the regional capital city Harbin. Similar clusters of infections were reported at two hospitals in Mudanjiang.

Many of the new cases in Northeastern China were linked to people returning from neighboring Russia, which has the second-highest number of confirmed cases in the world. But the case of a 45-year-old laundry worker at a local police station in Shulan, a small city in northeastern Jilin province, made epidemiologists question whether there are infection sources other than Russia.

The laundry worker, who infected 11 others including her husband and sisters, had no recent travel or exposure history. Health officials are conducting genetic sequencing of the virus obtained from the new cluster of patients around the laundry worker and will compare it with the strain found in infected travelers returning from Russia to determine whether they’re connected, according to the CDC’s Wu.

The new cluster of cases in Wuhan also complicated containment efforts as five of the six new infections were asymptomatic, meaning the patients tested positive for the virus and were capable of infecting others without showing symptoms.

After locking down the residential compound where the six new cases appeared, the city decided to launch mass testing of its entire population over 10 days, aiming to the identify asymptomatic virus carriers.

Whether it’s financially and practically feasible to carry out such sweeping testing is still debatable. It will cost as much as 2 billion yuan ($282 million) and will require rapid expansion of testing kit supply and lab capacity. As of April 19, there were 53 institutions that could run nucleic acid tests in Wuhan, along with 211 testing sites for taking samples, with daily testing capacity of 46,000, according to Wuhan Deputy Mayor Li Qiang. That’s far short of the government’s goal of testing more than 1 million people a day.

Supporters of the effort argue that a costly one-time hit will save the city from long-term pain. Local residents and foreign investors are concerned about resurgence and asymptomatic cases, which will impede the reopening process, a person at Wuhan CDC said. The city generates an average of 4.4 billion yuan of GDP per day, so a one-day closure would cost far more than the expense of testing.

“If the economy can recover faster, then the testing is worth it,” the CDC person said.

But Wu said there is no need for universal screening in certain communities with no cases. Instead, more accurate and efficient sampling and screening of susceptible groups and key communities should be the priorities, Wu said. Meanwhile, environmental and animal investigations should be conducted as well, he said.

The emergence of sporadic cases is one of the manifestations of the normalization of the epidemic, said Jiang Qingwu, an epidemiologist and former director of the Institute of Public Health at Fudan University.

“We need to respond in a timely manner, but we shouldn’t go too far,” he said.

The city government said it has tested 3 million so far without finding positive cases.

Another question is whether a single nucleic acid test can accurately discover an infected person and to what extent there are false negative results. Virus transmission is a dynamic process, and it’s impossible to find all infected persons or the source of infection through one-time testing, the CDC’s Feng said. It isn’t necessary to expand mass testing nationwide, he argued.

Even if Wuhan is able to test all its residents, will that prevent a resurgence? Based on the experience of China’s neighbor South Korea, probably not. South Korea was applauded for its aggressive strategy in handling the outbreak using mass rapid-testing and comprehensive, digitally enabled contact tracing. But despite that approach, more than 100 new cases recently appeared involving gay customers of nightclubs, suggesting the measures weren’t as effective as thought.

The new cases popped up as South Korea started to relax strict social distancing rules and reopen public facilities. A similar resurgence took place in Germany, where more than 600 meat plant workers were infected with the virus.

If reopening the economy without treatment and vaccines means an unavoidable resurgence, what measures are effective under the new circumstances?

The recent outbreak in South Korea’s gay community prompted authorities to revise their tracking approach. To encourage people to come forward for testing, health authorities introduced an anonymous system under which people need only provide a phone number, not a name or address as required in previous testing.

After extensive testing, if there is still a hidden risk of transmission from unknown sources in the community, the only way to reduce infection is to maintain social distancing, scientists said. People should continue to wear masks in public areas and wash hands frequently, said Yuan Guoyong, a microbiologist who is a member of an expert senior team of the China’s National Health Commission.