By Xiao Hui and Matthew Walsh 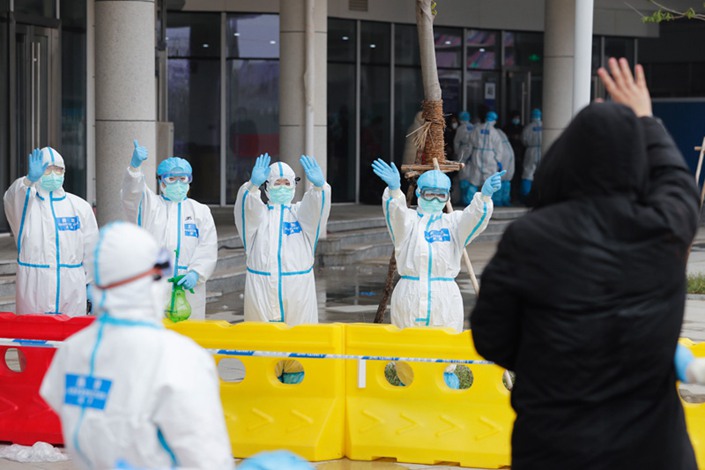 “I was looking forward to getting back to normal; I didn’t think I’d end up feeling even more alone.” Photo: Xinhua

On Wednesday, authorities in the central Chinese province of Hubei, where the country’s Covid-19 epidemic started, began rolling back transport restrictions designed to check the spread of the new coronavirus. The announcement, which will extend to the 11 million-strong city of Wuhan from April 8, suggests Chinese officials are growing increasingly confident that they have successfully brought the outbreak under control.

In Wuhan, which had recorded 50,000 infections and more than 2,500 Covid-19-related deaths as of Wednesday, many recovered patients have returned home after spending weeks in hospitals and quarantine stations. Although they crave a return to normality, some of them continue to experience the scars of disease and ostracism from their communities.

One of those is Li, a 70-year-old retiree who requested that we not publish his full name to avoid further discrimination. His interview with Caixin has been edited for length.

On Jan. 18, I went to a crowded exhibition at a Wuhan bookstore. I started feeling sick that night: I had a low fever, felt listless, and had sore muscles.

The following day, I went to the hospital. Doctors told me that many patients had fevers like mine and that I should stay home, rest, and take the medicine they gave me.

Within a few days, my fever was joined by an upset stomach and wheezing. On Jan. 22, I went back to the hospital. It was completely crammed: I waited from the late afternoon until midnight before I finally saw a doctor, who immediately told me there were no beds. As I got home that night, the authorities implemented a citywide lockdown of Wuhan.

By Jan. 26, I was feeling terrible. There were no cars available, so I walked slowly back to the hospital, where a CT scan showed I had an infection in both lungs with white patches that looked like ground-up glass — one of the hallmarks of Covid-19. That’s when I realized I had the disease, but again I was informed that the hospital was already full.

Knowing I might never recover without immediate hospitalization, I frantically called anyone I knew with medical connections. A friend told me that another hospital was about to open a new ward to deal with the surge in patients. I rushed over there and was lucky enough to get a bed in the intensive care unit. The ward was completely full, and the facilities were extremely basic.

Within a few days of being admitted into the ICU, I watched the elderly man in the bed next to mine die. In the early hours of Jan. 29, I suddenly smelled something foul and turned to see him lying rigid and shuddering. He was fighting so hard to breathe that he had lost continence. Although I rang the bell for a doctor, nobody came. I could only hold his hand and speak to him as he slipped away. He must have been so lonely without his family beside him.

I stayed in the ICU for eight days. During that time, I think eight patients there died.

A brush with death

By my second day in the ICU, I was running a fever of 38 degrees Celsius, had a terrible stomach, and, worst of all, felt constantly winded.

I got along well with the ward’s medical staff. I enjoyed chatting to the doctors about my condition, and kept thanking them and telling them how well they were doing. Nobody knows exactly how to treat this emerging disease, so I felt it was important to praise the doctors and nurses and raise their confidence.

I didn’t have much of an appetite for the first few days, but I forced myself to eat, knowing it was important for my recovery. In fact, my overeating and lack of exercise created a different problem.

Before the epidemic, I had been told I have an impaired sugar tolerance — my doctors say it’s an early sign of diabetes. One night, I suddenly felt fiercely itchy all over. I scratched and scratched until I drew blood, but couldn’t subdue the itch. After about an hour, I fell back exhausted. I was cold, especially in my chest, which felt like ice. My whole body felt empty, as if I was floating away. The sensation was one of total absolution as death drew near.

After a period of confusion, I suddenly wondered if what I was experiencing was something called ketoacidosis, which can occur in people with diabetes and pre-diabetes when your insulin levels drop and your body starts burning fat as fuel. Two things happen: your blood sugar levels spike, and acidic substances are released into your blood.

I forced myself upright and downed a cup of water. With no doctors around, I staggered to where they kept some supplies and tested my blood sugar. The reading was 28.9. My normal level is about 6.

Knowing I had to rapidly bring down my blood sugar level, I injected myself with several doses of insulin from the supply station. Then I drank some more water and returned to bed. Gradually, I began to feel better. In the morning, when a doctor next came to the ward, I told him what had happened and asked him to measure my blood sugar again: 8.9. The doctor said I’d probably saved my own life.

After eight days in the ICU, my pneumonia symptoms subsided and my nucleic acid test (NAT) came back negative. I was finally transferred to the isolation ward.

A few of my friends weren’t so lucky. As far as I know, at least five people in my amateur photography group have died since the outbreak started.

A long road to recovery

After returning four more negative NATs in the isolation ward, I finally left the hospital on Feb. 14. I was looking forward to getting back to normal; I didn’t think I’d end up feeling even more alone.

One of the many things we don’t know about Covid-19 is whether it leaves people with lifelong ailments. I’m now about 18 kilograms lighter than when I went into the hospital, can’t breathe as freely as before, and often feel as though my windpipe and throat are blocked. We also don’t know if people who have recovered from the disease can catch it again.

After leaving the hospital, I spent 14 days quarantining at a hotel. I had to be very careful about coming home. I didn’t want to infect my wife, who has longstanding respiratory problems. Since I returned, we’ve confined ourselves to separate rooms and worn masks around the house.

This disease tests your spirit as much as your body, because it forces you to stay apart from others. I particularly miss my dear little sister, who would often call round at our house. Since the epidemic started, I haven’t seen or spoken to her once. Perhaps she thinks it would be unlucky to contact me now.

People outside the family shun recovered patients like me as well. Before I got sick, I was enjoying a full and happy retirement. On the social messaging app WeChat, I was a keen member of group chats for photography, swimming, cycling, and outdoor climbing. Now, those chats are silent.

All of this makes me very sad. The people I’m fondest of have effectively isolated me, leaving me with nobody to speak to. When I do communicate with others, I can see by their words and actions that they don’t want to be there. Everyone seems to think I pose a risk to their health, so in that sense, my recovery has only been temporary.

In the month since I got out of the hospital, I’ve briefly left the house four times — to charge my electric scooter, get a health code, collect some food, and collect medicine from the hospital. Each time, the people I’ve dealt with — neighbors, community volunteers, hospital staff — have recoiled from me or barked at me to stand farther away from them. I feel like a plague victim.

All my life, I’ve loved being around other people. Since retiring, my life has been rich in group activities. But until society is ready to accept me again, I won’t be attending events with lots of people. I don’t want to make them feel uneasy.

I’m looking forward to going back out with my camera after Wuhan lifts its lockdown. But I’ll be doing it alone.