By Flynn Murphy and Bao Zhiming 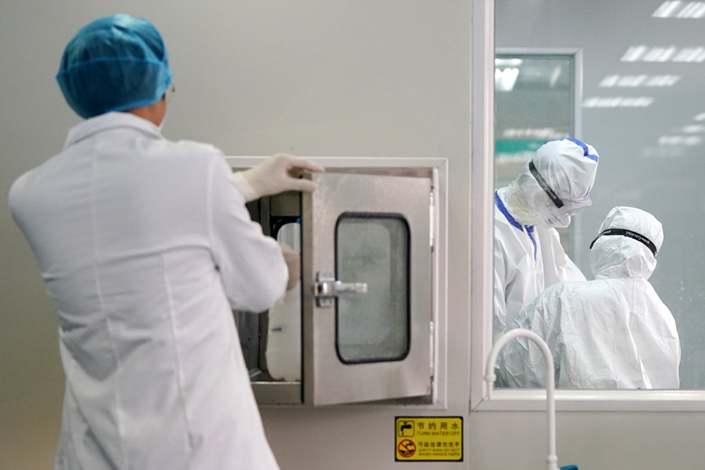 A medical worker sends a box containing nucleic acid testing samples into a laboratory through a window on Feb. 13 in Wuhan, the epicenter of China's coronavirus outbreak. Photo: Central government website

Wuhan’s five-day stretch with no new Covid-19 cases has been broken with the diagnosis of a 29-year-old gastroenterologist announced Tuesday, raising questions over whether the man may have been infected by someone without symptoms.

The infected doctor works at the People’s Hospital of Wuhan University, where investigators think he contracted the disease. He was admitted to the hospital Sunday with a low-grade fever and other clinical symptoms, and tested positive using a nucleic acid test on Monday. Antibody tests suggested it was a new infection.

Caixin has learned the doctor treated an asymptomatic person at an outpatient clinic on March 18 who later tested positive for the virus.

Asymptomatic cases are those where an individual has no clinical symptoms, but a laboratory test can find traces of the virus in bodily fluid samples. The proportion of coronavirus cases that are asymptomatic has proved controversial, since early research has often failed to follow people throughout the whole course of their disease to see if they were truly symptomless, explained Ian Mackay, a virologist from the University of Queensland in Australia.

Nevertheless, the phenomenon of asymptomatic cases is considered important to containing the spread of Covid-19 because there is preliminary evidence that, like people with mild forms of the disease, those with no symptoms can still sicken others and are also less likely to self-isolate.

On Tuesday afternoon, disease control officials were disinfecting the Wuchang district apartment in Wuhan where the gastroenterologist lives with his partner and another roommate. The other two have been quarantined as close contacts.

Officials told Caixin that while the doctor was thought to have been infected at the hospital, the possibility he contracted the disease in the community had not been ruled out and they were still investigating.

The doctor’s colleagues at the Department of Gastroenterology have also been screened with nucleic acid tests and CT scans showing no abnormalities. They are currently under medical observation.

China’s Covid-19 diagnosis and treatment plan points to people without symptoms as a possible source of transmission. Such cases are different from people who have not yet developed symptoms but are already infectious, known as “pre-symptomatic” cases, or with mild cases of coronavirus disease.

The absence of symptoms throughout the whole course of infection is what makes detecting such cases difficult, though contact tracing from diagnosed cases and screening of at risk groups such as health care workers can provide clues.

Asymptomatic infections are not thought to be major drivers of disease spread, according to Li Xingwang, an infectious diseases expert at Beijing’s Ditan Hospital. That’s because asymptomatic cases are by definition mild, meaning the people shed less virus, he said. The risks are in the fact they can allow undetected spread.

A peer-reviewed paper published in Science in mid-March used case data and mathematical modeling to estimate that prior to Jan. 23, unrecorded cases — which are often mild or asymptomatic cases — were responsible for 79% of recorded cases.

Last week, Caixin journalists revealed that authorities in Wuhan, the city of 11 million where the virus was first detected, were still finding around a dozen new infected people without symptoms each day, despite provincial and national caseloads leveling off. Chinese authorities do not release publicly their count of asymptomatic cases.