By Zhao Jinzhao and Dave Yin 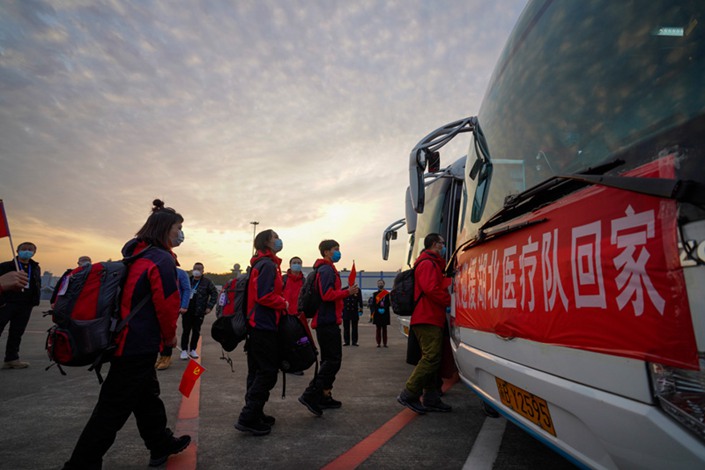 As of Sunday, Hubei province reported four consecutive days of zero new “confirmed cases,” but had continued to identify new people who test positive for the virus. Photo: Xinhua

Despite official figures reporting few to no new domestic Covid-19 cases on the Chinese mainland in recent days, authorities continue to detect more infections, with those in the city at the heart of the country’s outbreak often amounting to more than a dozen a day, Caixin has learned.

According to a member of the infectious disease prevention and control team in Wuhan, every day the city continues to record “several or more than a dozen asymptomatic infected individuals,” which are people that have tested positive for Covid-19, but do not feel ill and are excluded from published numbers.

As of Sunday, Hubei province, where Wuhan is located, had four consecutive days of zero new “confirmed cases.”

The person, who asked not to be named, said that these asymptomatic people are found by tracing the contacts of others who are infected and by screening quarantine workers who are at high risk of infection, as opposed to en masse testing.

“It’s not possible at the moment to tell if transmission has stopped,” the person said.

As reported new locally transmitted cases of Covid-19 have dwindled, China has moved to send home the teams of medical personnel it brought in from across the country to assist hospital workers in Hubei. Between March 17 and 20, some 12,000 medical personnel departed the province.

But the infectious disease prevention and control team has stayed behind, after Hubei’s provincial Covid-19 task force on Friday ordered it to remain until central authorities say otherwise, Caixin has learned.

According to a person at the Chinese Center for Disease Control and Prevention, this team of specialists was kept in Hubei because the central government continues to feel unease about the situation in the area, in part because of the presence of asymptomatic individuals.

Since February, the Covid-19 prevention and control policies issued by the National Health Commission (NHC) have stipulated that asymptomatic infected individuals are not considered “confirmed cases” and that their numbers should not be released.

However, given numerous studies suggesting that this group is infectious, the NHC has required that, once detected, they be subject to a 14-day quarantine and lab testing, recategorizing them as “confirmed” cases only in the event they develop symptoms.

Caixin previously obtained data that showed Northeast China’s Heilongjiang province had 480 “confirmed cases” on Feb. 25, but had also discovered 104 asymptomatic infected individuals that it left off the public tally.

A March 6 preprint – a study that has not yet been peer-reviewed – by Chinese and American researchers suggested that asymptomatic cases and those with mild symptoms could account for at least 59% of Covid-19 infections, potentially undetected and fueling its spread.

Considering Wuhan is the epicenter of China’s epidemic, “there’s still a lot that needs to be investigated and traced,” the infectious disease prevention and control team member said.