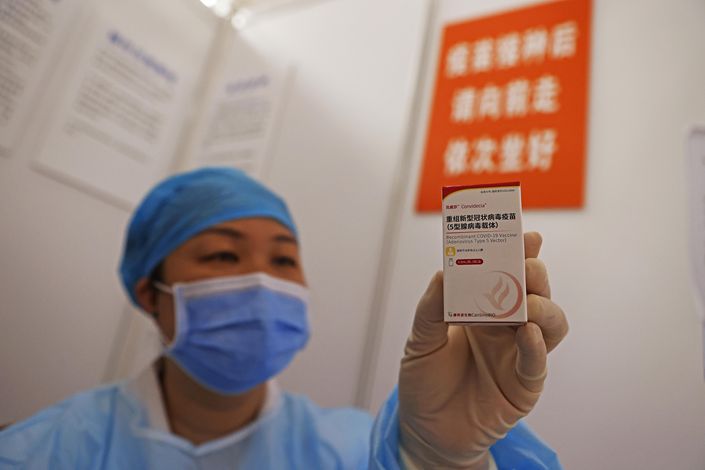 A medical worker holds up a vaccine in Shanghai's suburban Jiading district on May 18. Photo: VCG

China has started administering a single-dose adenovirus vector vaccine in at least five eastern cities, including the financial capital Shanghai, as the country speeds up its immunization drive following a resurgence of coronavirus cases.

Starting earlier this month, residents in Shanghai and four cities in the neighboring province of Zhejiang, including Wenzhou, Shaoxing, Quzhou and Taizhou, were able to receive the Ad5-nCoV vaccine — also known as Convidecia — which was co-developed by the Chinese military and Tianjin-based biotech company CanSino Biologics Inc. (6185.HK), according to local media reports.

“People who got vaccinated have so far had no serious adverse reactions related to the vaccine,” said Chen Wei, an academician at the Chinese Academy of Engineering and a lead researcher on the vaccine.

The world’s most populous country administered more than 15 million doses of Covid-19 vaccines on Monday, marking the highest ever daily doses, according to data (link in Chinese) from the National Health Commission. So far more than 435 million shots have been administered to people across China.

The ramp-up in vaccinations comes after a handful of cases were detected in the eastern province of Anhui and the northeastern province of Liaoning. The flare-ups were the first local transmissions in China since April 20 and the source of the infections is yet to be determined.

Caixin has learned many district authorities across Shanghai have delivered the single-shot vaccine to residents, while on Wednesday, a video by the state-run Xinhua News Agency showed people in the Xuhui district lining up to get vaccinated at a temporary vaccination center.

On May 12, Wenzhou received its first batch of the vaccine, which was subsequently used to inoculate residents aged between 18 and 59, the state-run Zhejiang News reported. Another city of Taizhou received some 3,600 doses of the vaccine a day later, the report said.

The city of Shaoxing has received some 2,400 doses of the vaccine with many residents prefering ths single-shot option over the two-dose vaccine, said Zhou Yanqing, head of the local vaccination department.

In Feburary, the Ad5-nCoV vaccine, which uses adenovirus vector to deliver a coronavirus antigen, was given conditional approval to be rolled out in China, followed by Russia’s Sputnik-V and the U.S.’ Johnson & Johnson’s single-shot vaccines.

The vaccine is available for residents aged 18 and above with an overall effective rate of 65. 28%, according to its phase 3 clinical trial results. It was found to be effective to protect against mutant variants of the coronavirus, the results showed.