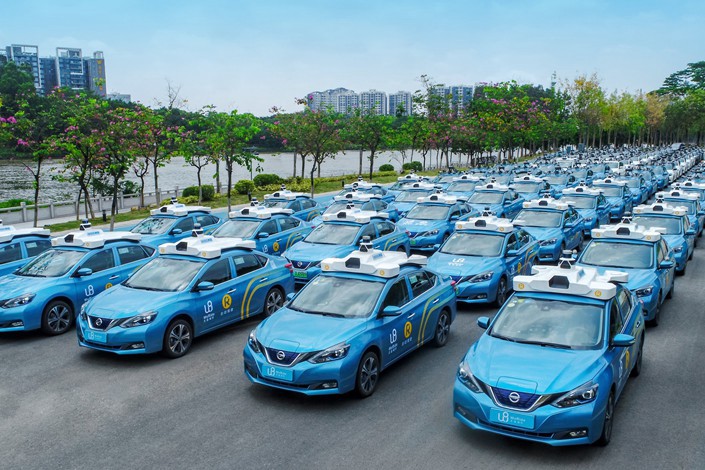 The permit from the California Department of Motor Vehicles allows WeRide to conduct driverless road tests during daylight hours from Monday to Friday under good weather conditions, though its vehicles are not allowed to exceed 45 mph. Photo: WeRide

Guangzhou-based startup WeRide has gotten the green light to test out two autonomous vehicle models on designated roads in San Jose, California, without a driver behind the wheel, the state’s motor vehicle bureau said.

The approval makes WeRide the third Chinese company to receive such permission in the U.S. state, reflecting the startup’s ambition to expand its profile beyond its home market, where it has built its reputation on a robotaxi pilot program and a driverless minibus service in southern China.

The permit, issued on April 12 by the California Department of Motor Vehicles (DMV), allows WeRide to conduct road tests during daylight hours from Monday to Friday under good weather conditions, according to its announcement. The vehicles are not allowed to exceed 45 mph.

WeRide is developing Level 4 autonomous vehicles, which means they can drive themselves under certain circumstances, but a human driver may sometimes need to take control, according to the U.S. National Highway Traffic Safety Administration, which ranks levels of autonomy using a rubric developed by American engineering standards group SAE International. Level 5 is the highest level of automation, but no Level 5 vehicles are known to exist.

In order to qualify for the permit, companies must meet requirements including providing proof of insurance or a bond equal to $5 million, according to the DMV. They must also verify that vehicles are SAE Level 4 or 5, meet Federal Motor Vehicle Safety Standards and train remote operators for the technology being tested.

In addition, the DMV requires permit holders to report any collisions involving a test vehicle within 10 days and submit an annual report on the number of cases in which a human driver had to take control of the car to avoid a crash or collision.

The California permit came as 4-year-old WeRide is going all out to make money off autonomous vehicle services, a common problem faced by nearly all companies delving into the self-driving technology business.

WeRide is not the only company in China trying to figure out how to profit from driverless cars. Earlier this week, Baidu said that it had been approved to launch a commercial autonomous bus pilot program in Chongqing, a month after the tech giant received a license that allowed it to charge fees via discounts and coupons for its robotaxi service in Cangzhou, North China’s Hebei province. Baidu’s robobus push dates back to at least 2018, when it announced volume production of a Level 4 unmanned minibus, called the Apolong, which it co-developed with domestic bus-maker Xiamen King Long Motor Group Co. Ltd.

So far, the governments of Shenzhen and Beijing have rolled out policies to encourage licensed companies to explore ways to make their autonomous vehicle services profitable as China aims to achieve mass production of cars with Level 3 self-driving capabilities by 2025.