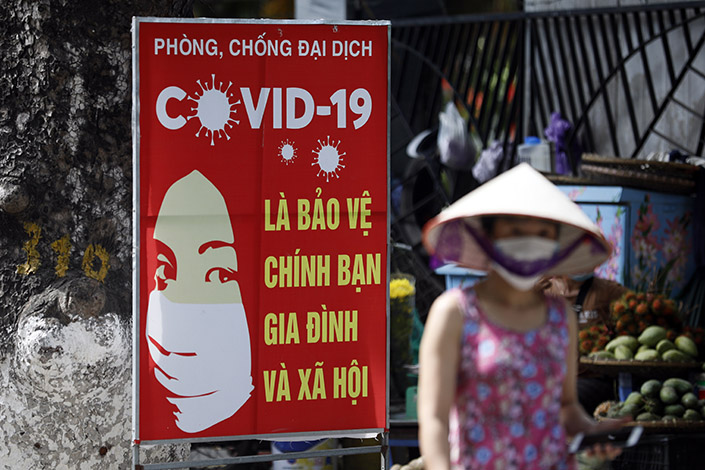 The days of an ENT specialist in New Taipei City are divided into three parts these days.

In the morning, Dr. Lee (pseudonym) carries out Covid-19 tests, usually testing about a 100 people in four hours. In the afternoon, he splits his time between checking on 10 hospitalized symptomatic patients, and examining asymptomatic patients in quarantine.

While doctors around the world have been working hard to treat Covid-19 patients since last year, Lee said he hadn’t imagined he would end up battling the pandemic.

Prior to April, Taiwan hadn’t recorded a single local transmission of the coronavirus in eight months, and only had a handful of cases since early 2020. The outbreak ended that record of success, however, with daily caseloads reaching into the hundreds since mid-May.

Taiwan isn’t the only place in Asia to have recently suffered a surge in cases after long keeping a lid on infections.

Vietnam spent most of 2020 close to normality, however the country started to set daily case records in May, recording thousands of cases over the past few weeks. The outbreak was characterized by multiple sources of infections, a variety of variants, and rapid spread in industrial zones.

In Thailand, rapid transmission in prisons and among construction workers has seen daily case counts in the thousands since April. May 17 saw close to 10,000 cases added to the country’s tally, more than in the whole of last year, though daily case numbers have generally been lower.

Why has the virus finally been able to break through previously tough-seeming defenses? Experts think that emergent variants of the virus — including those first detected in India and the U.K. — have rendered the safeguards insufficient.

Teo Yik Ying, dean of the National University of Singapore’s Saw Swee Hock School of Public Health, told Caixin that these variants are much more transmissible than the coronavirus variants the world first saw in early 2020.

He also described the speed of infections as “frightening”— four links in the chain of transmission can appear in 10 days. “Compared to what we were faced with last year, it is quite a different situation.”

On May 30, Vietnam announced it had detected a new coronavirus variant that combines features of those first identified in India and the U.K. and is easily transmissible by air.

Though some have argued that vaccines are still only playing a limited role in controlling the pandemic, others say the low uptake of vaccines in some Asian regions means the more transmissible variants’ impact is being exacerbated.

In general — besides a handful of places such as China, Mongolia and Singapore — Asia has fallen far behind the hard-hit U.S. and EU countries in vaccinations.

“For several Asian countries, perhaps lulled by their confidence and security from being able to control the outbreak well, they were not particularly quick in accessing and distributing these vaccines to their people, and even when they do, the population was not as eager as European and North American counterparts in taking the vaccine,” said Teo. “This resulted in a population that is highly susceptible to the new variants that are more transmissible.”

Hong Kong — which has administered first doses to just over 20% of its population — will donate excess doses of the Pfizer/BioNTech vaccine to other countries as fewer residents than expected chose to get the shot, the government said.

However residents’ reluctance to get a jab isn’t the issue for most Asian countries and regions — lacking the jabs to give them is. Few have developed their own vaccines, and most governments are waiting at the back of the queue for deliveries from the U.S. and Europe.

This reflects the fact that many have relatively well developed public health systems — sometimes a legacy of the SARS crisis early this millennium — but lack vaccine development and production capacity, especially for the new generation of mRNA vaccines.

“The vaccine market itself is very small, and before Covid-19, the mRNA vaccine market did not exist at all – and most countries do not have a very well-developed vaccine development or vaccine manufacturing set-up,” said Gustav Ando, vice president of life sciences at IHS Markit. “In the past it has not been seen as a political priority in many countries. Inevitably it takes time to develop something like this.”

However, while India has the capability to develop and mass produce vaccines it still struggled to meet domestic demand when the second wave began to hit its 1.36 billion citizens in March.

Theoretically, the country has a monthly production capacity of up to 90 million vaccine doses, including both the Oxford/AstraZeneca jab produced by the Serum Institute of India (SII) and Covaxin produced by Bharat Biotech. However, manufacturers didn’t properly prepare to ramp up production — in part due to the official perception the pandemic was waning — and the supply of raw materials was curbed due to U.S. export restrictions.

So far, China is an exception in Asia, which has locally developed, mass-produced and deployed several vaccines, two of which have been granted WHO approval for emergency use.

WHO Director-General Tedros Adhanom described inequality in global vaccine distribution as the “unfolding of a moral catastrophe,” as rich countries use their clout to push toward herd immunity while developing countries struggle to inoculate frontline workers.

This inequality is in part related to the simple fact that there is a shortage of Covid-19 vaccines. The Covax vaccine-sharing scheme was 190 million doses behind its schedule for the end of June, as its major supplier — India’s SII — said it would limit exports until year end to ensure domestic supply.

To fill the gap, UNICEF Executive Director Henrietta Fore suggested that G-7 countries could donate about 153 million doses if they shared only 20% of their available supply over June, July, and August.

The U.S. has promised to release 60 million AstraZeneca doses that do not have FDA approval and could not be administered domestically, and another 20 million approved doses of Pfizer/BioNTech, Moderna, and Johnson & Johnson shots.

Despite these calls to action and promises, most countries are simply playing the waiting game.

Even if this timeline becomes a reality, Teo estimated that Taiwan will still need to rely on strict personal and public health measures, including border controls, for at least another three months, as vaccines take time to distribute and administer, especially given the necessary gap between first and second doses.