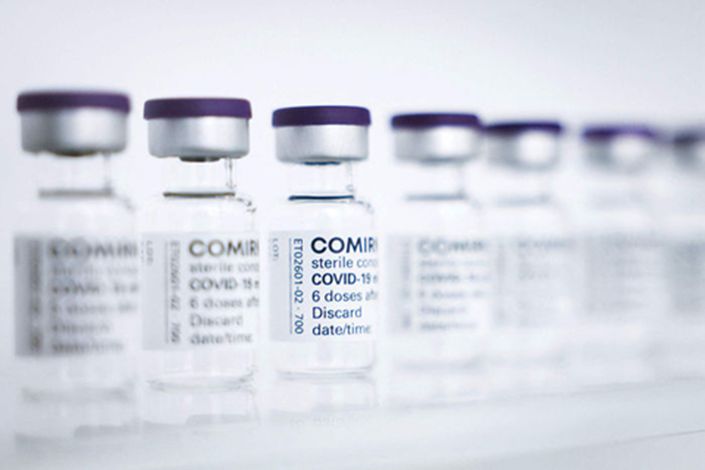 Fosun Pharma announced that it plans to set up a joint venture with German vaccine company Biontech to achieve commercial local production of mRNA neocoronal vaccine products, with an annual capacity of 1 billion doses, on May 9.

Fosun Pharma announced it would set up a Shanghai facility to co-produce a Covid-19 vaccine developed by BioNTech SE for the China market, just hours before the German drug maker announced its own plans to build a regional headquarters and similar wholly owned facility in Singapore.

Announcement of the Shanghai facility marks the latest step in a partnership formed by Fosun and BioNTech early in the pandemic, with an aim of bringing the German company’s innovative and highly effective mRNA vaccine technology to China. Establishment of the Singapore hub is also a nod to the region’s big growth potential, and the importance of producing BioNTech’s vaccines as close as possible to their actual place of use due to super-cold temperatures needed during transport.

Hong Kong-listed shares of Shanghai Fosun Pharmaceutical (Group) Co. Ltd. (600196.SS) shot up more than 25% in Monday trade after the announcement, while the company’s Shanghai-listed shares shot up by their maximum daily 10% limit.

Under the latest development in their tie-up, Fosun and BioNTech will set up a $200 million 50-50 joint venture in Shanghai that will initially produce the latter’s mRNA-based Covid-19 vaccine for sale in China, according to a Fosun announcement on Sunday. Fosun will contribute funds to build the high-tech facility for the drug’s production, while BioNTech will provide the intellectual property in the form of its Covid-19 vaccine co-developed with U.S. drug giant Pfizer.

“During the term of the joint venture company, Fosun Pharmaceutical Industrial and BioNTech may potentially expand collaboration beyond the coronavirus vaccine product into other infectious diseases and other therapeutic areas based on the mRNA platform, subject to the success of the coronavirus vaccine product in China,” Fosun Pharma said in the statement.

In a statement to Caixin on Monday, BioNTech said it had agreed the “heads of terms” with Fosun Pharma, but said whether it proceeds with the venture would depend on “BioNTech receiving approval for its COVID-19 vaccine in Mainland China and agreement with Fosun Pharma on a definitive JV agreement, in addition to other conditions.”

“As part of its global supply strategy, BioNTech believes that establishing local manufacturing capacity for the COVID-19 vaccine could substantially increase the Company’s ability to supply vaccines to China upon approval,” the firms said.

According to Fosun, the joint venture’s board will have six members, split evenly between its nominees and those from BioNTech. One of the BioNTech nominees will also serve as the venture’s board chairman, according to the announcement. The venture will have the capacity to produce up to 1 billion vaccine doses per year, with Fosun Pharma acting as the sales agent for China.

Caixin reported last December the two companies would develop the manufacturing facility in two stages on an 11.5-acre site in Shanghai. The first of those stages would be able to produce 200 million doses of the vaccine annually based on cGMP standards.

The announcement marks the latest step forward in a partnership dating back to March of last year at the start of the pandemic, when the two companies first announced a “vaccine strategic alliance in China.” That alliance saw Fosun assume responsibility for clinical testing of the BioNTech vaccine in China, a necessary step before it could be commercially sold there.

The deal gave Fosun Pharma the rights to commercialize BioNTech’s vaccine in China, with the former paying the latter an up-front fee of $135 million. At the time that deal was reached, China was in the depths of its Covid-19 outbreak, while the rest of the world was just starting to feel the impact.

The joint venture will become the second facility to make a foreign-developed vaccine in China, and the only one so far that plans to sell its products locally pending regulatory approval. Last month, the vaccine arm of Hualan Biological Engineering Inc. (002007.SZ) announced it would produce Russia’s Sputnik V vaccine for Covid-19, though it said it would export its output back to Russia.

All vaccines administered on the Chinese mainland to date have been locally developed, including two also being exported globally by Sinopharm and Sinovac. Hong Kong and Macao both approved the sale of the BioNTech vaccine for local use in the special administrative regions earlier this year.

The vaccine’s approval process in China is moving along more slowly than industry watchers had predicted. At the request of China’s drug regulator, Fosun Pharma has been submitting documents on a rolling review basis to expedite the process, Chairman and CEO Wu Yifang told Caixin in a previous interview last year. The head of the American Chamber of Commerce in Shanghai recently said the organization had been notified that the Fosun-BioNTech vaccines could become available in the city as early as June.

Just hours after Fosun Pharma announced the joint venture, BioNTech made its own announcement that it would set up an Asia regional headquarters in Singapore, including a wholly owned manufacturing facility similar to the one it will co-develop in China.

It said the “state-of-the-art manufacturing site will support global supply of mRNA-based vaccines and therapeutics and provide a rapid response capability for Southeast Asia against potential future pandemic threats,” adding the plan was supported by the Singapore Economic Development Board.

“Having multiple nodes in our production network is an important strategic step in building out our global footprint and capabilities,” said BioNTech co-founder and CEO Ugur Sahin. “With this planned mRNA production facility, we will increase our overall network capacity and expand our ability to manufacture and deliver our mRNA vaccines and therapies to people around the world.”

BioNTech’s New York-listed shares closed up 9.35% last Friday, and were up another 7.51% in pre-market trading on Monday.