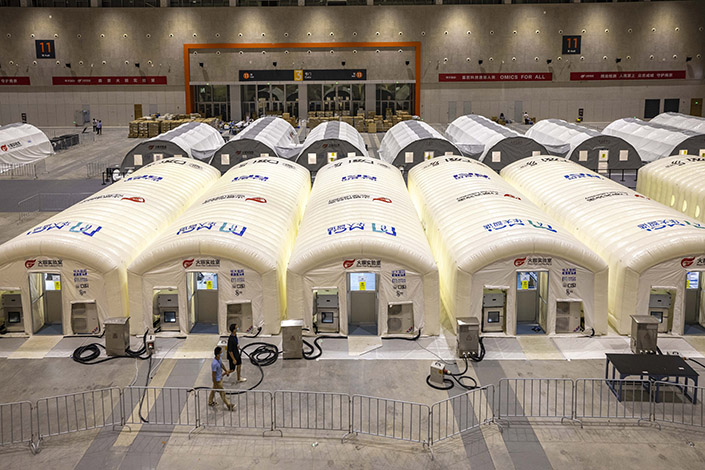 An 8000-square-meter laboratory to improve the detection efficiency and reduce the risk of infection of testers is being built in Nanjing, East China's Jiangsu province, on Monday. Photo: VCG.

At least nine cities in five Chinese provinces have reported Covid-19 cases connected to the latest outbreak in the city of Nanjing which has infected at least 150 residents since July 20, local authorities said. Besides Jiangsu province, Guangdong, Sichuan, Anhui and Liaoning are affected.

Nanjing, the capital of Jiangsu province, saw a significant rise in local infections over the past few days, reporting 48 cases on Tuesday. This brought the local outbreak total to 155.

The eastern city of more than 9 million people has kicked off a second round of citywide testing, a key part of the country’s anti-Covid playbook to curb a virus resurgence. Nationally, China reported (link in Chinese) that there were 86 new cases on Tuesday, up from 71 a day earlier, marking the highest number of daily infections since January. Among them, 55 were local infections, of which most were in Jiangsu.

The same day, local authorities said at a press conference that based on genetic testing of patients, Nanjing’s outbreak has been caused by the highly transmissible delta variant, which was recently also detected in more than 160 patients in the southern province of Guangdong.

The Nanjing outbreak was first found on July 20, when nine workers at Nanjing Lukou International Airport tested positive for Covid-19. The source of the infections remains under investigation, authorities said.