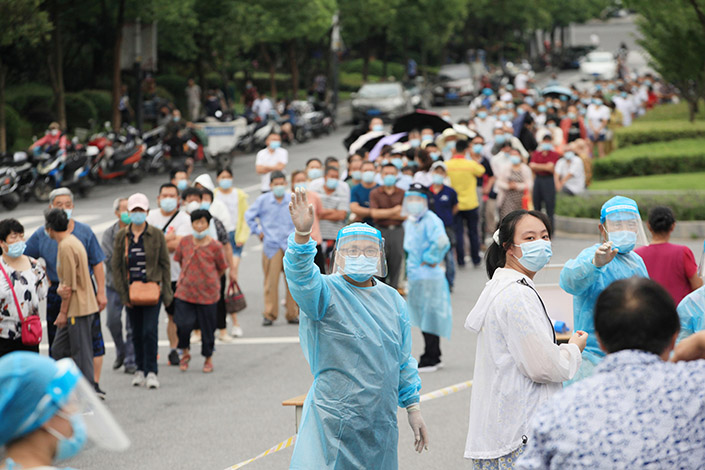 The Covid-19 outbreak in Nanjing that has spread to at least 15 cities in seven provinces, originated from a passenger flight from Russia, local authorities said Friday, as the eastern China city battles the country’s worst resurgence of the epidemic since January.

Ding Jie, deputy director of Nanjing’s center for disease control and prevention, said at a press conference that 52 of the recent cases were found to have contracted the highly transmissible delta variant based on their gene sequencing results.

Among them, test results of some cabin cleaners were consistent with an imported case on Air China flight CA910, which arrived at Nanjing Lukou International Airport from Russia on July 10.

On Thursday, Nanjing reported 13 new cases (link in Chinese), bringing the total number in its outbreak to 185. At its center is Lukou airport, however, some 30 related cases have been found in 15 cities across seven provinces, including Beijing, according to public information compiled by Caixin.

Nanjing, the capital of Jiangsu province, is home to more than 9.3 million people and is carrying out its third round of citywide testing. The city has also closed part of the public transportation system and ordered tens of thousands of people to stay at home.

An investigation found the cleaners were working in the flight’s cabin on July 10. Some might have contracted the virus as they didn’t use standard prevention and control measures, and then passed it on to other colleagues, Ding said.

At the same time as the cleaners were removing garbage from both international and domestic flights, other airport staff might have been infected after coming into contact with them, or being exposed to the “polluted” environment, she said.

At least 66 airport cleaners have so far been infected with the virus, according to Caixin calculations.

On Wednesday, the Central Commission for Discipline Inspection, the Communist Party’s top anti-corruption watchdog, said in a statement (link in Chinese) that Lukou airport lacked supervision, was poorly managed and failed to implement all the required epidemic prevention and control measures.

According to the statement, the airport didn’t separate cleaners responsible for domestic flights from those serving international flights, resulting in cases being imported from outside China and causing further spread of the virus.

A February guideline (link in Chinese) issued by the Civil Aviation Administration of China said that airport staff handling international flight services should avoid using the same public facilities as passengers and not come into contact with workers serving domestic flights.

Last week, Feng Jun, party secretary and chairman of Eastern Airport Group Co. Ltd., a state-owned company that oversees several airports in Jiangsu, was suspended from duty, with many believing it was related to poor epidemic control measures at Lukou airport.

Currently, China requires every staff member at domestic airports to take a nucleic acid test once a week. However, Caixin has learned that among the several dozen cleaners who were first confirmed to be infected at Lukou airport, most had not been tested from July 10 to 19.

The Nanjing outbreak was first identified on July 20 when nine workers at Lukou airport tested positive for Covid-19.

The outbreak has raised concerns over whether China can quickly bring it under control. Zhang Wenhong, director of the infectious disease department at Shanghai’s Huashan Hospital, said that as there was no big spread of Covid-19 originating from any source other than Lukou airport, the outbreak remains controllable if no more cases emerge in other provinces in the next two weeks.

On Thursday, China reported (link in Chinese) 21 new locally transmitted cases, including 18 in Jiangsu, two in Hunan province and one in Beijing. It also reported 43 imported cases, according to the National Health Commission.