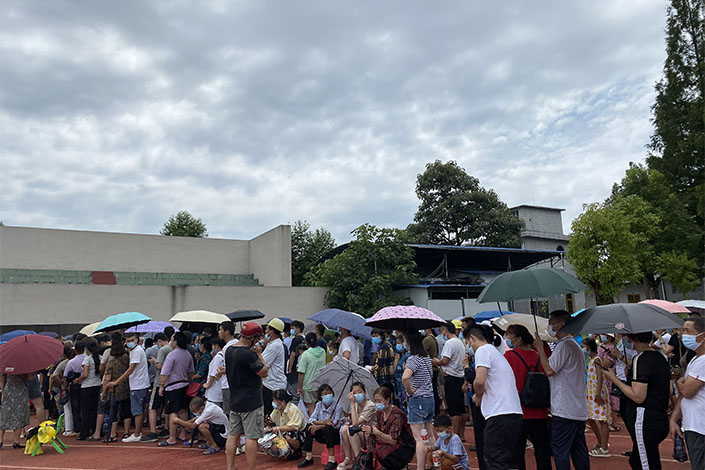 Compounding the risk of further transmission, four of the 11 infected tourists travelling together from the northeast city of Dalian joined some 5,000 others including those in the audience, performers and event staff at a live show on July 22 at a local theater in Wulinyuan, Zhangjiajie city, according to a statement released by local health authorities this week.

No information was immediately available to confirm whether they were infected at the event or already infectious at the time.

Regardless, local health authorities in Zhangjiajie are still scrambling to carry out contact tracing of every audience member to contain the spread of the outbreak. They have conducted the first round of mass testing on the nearly 2,900 performers and staff members, all of whom returned negative results.

Anyone present at the performance has been requested to report to local health authorities, according to the local center for disease prevention and control.

Days after the gathering, the four people from Dalian returned positive test results for Covid-19, including three who were asymptomatic, health officials in Dalian said in a statement on Monday.

China is battling its worst outbreak of Covid-19 since January, with the spread originating in the eastern metropolis of Nanjing and now reaching 26 cities in 15 provinces. The local outbreak in the city of 9 million now numbers 171, with most cases confirmed as the highly transmissible Delta variant.

Before heading to Zhangjiajie, the four infected people from Dalian were on flights that transited Nanjing Lukou International Airport, according to Hunan provincial health authorities.

As yet there is no evidence linking the Hunan cases to the Nanjing outbreak or any information on which strain of the virus they were infected with, according to officials.

Meanwhile, in the southwest city of Chengdu in Sichuan province, five people were confirmed to be infected on Wednesday after also having traveled to Zhangjiajie, according to local health authorities.

And on Thursday, Beijing reported two confirmed cases who visited Zhangjiajie, with officials sealing off the residential complex where the infected people live in the north district of Changping.