By Cai Xuejiao and Xu Wen 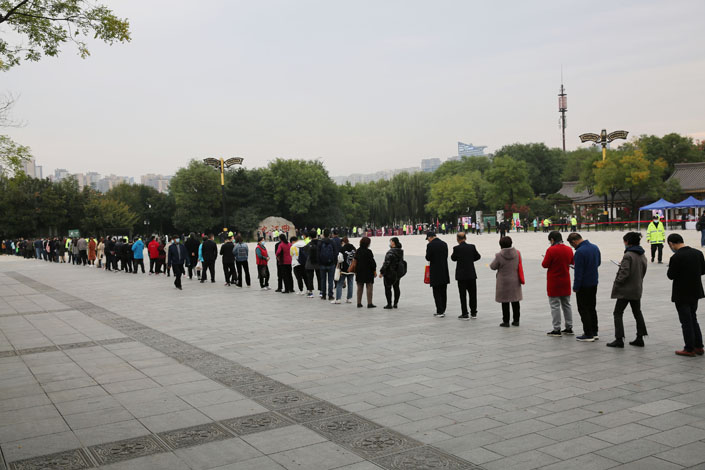 Health authorities in China are scrambling to control a multiregion Covid outbreak linked to a group of eight people who tested positive after traveling together to Inner Mongolia and Gansu province.

Cases connected to the group have been reported in at least four provincial-level regions, including Beijing, according to local health authorities.

The northwestern province of Shaanxi reported that the six newly confirmed cases and one asymptomatic case on Monday are tourists who visited the capital city of Xi’an after they departed from Shanghai for trips in Inner Mongolia and Gansu province earlier this month, according to the provincial health commission.

Yinchuan, in Northwest China’s Ningxia Hui autonomous region, also reported one confirmed case, a person who had accompanied the group of seven people for trips before arriving in the city.

As of Tuesday, health authorities in Xi’an, Gansu’s capital city Lanzhou, Inner Mongolia’s Ejin Banner and Beijing had reported another 13 positive cases connected to the group.

The group of seven tourists, all in their 60s or 70s, included three couples. They departed from Shanghai together on Oct. 9 and met with another person, surnamed Ai, in the Gansu city of Zhangye. They then took road trips in Gansu and Inner Mongolia for a week, before the seven tourists and Ai left the city of Jiayuguan for Xi’an and Yinchuan on Friday, respectively.

Lanzhou on Tuesday reported six positive cases, including five people who had taken trips visiting Ejin Banner and dined in the same restaurant on the same day with the group of eight tourists, according to local authorities. The cases were found after a local resident surnamed Zhang tested positive Monday and local authorities traced Zhang’s close contacts.

The health commission of Inner Mongolia on Tuesday reported five confirmed cases who work in the restaurant in Ejin Banner and were close contacts of the Shanghai couple, Yan and Jiang.

The provincial health commission of Shaanxi reported one confirmed case who was diagnosed on Monday. The person, a Xi’an resident, had accompanied the group from Shanghai on Saturday.

On Tuesday, Beijing reported a positive case in Fengtai district. The person came to the city from Gansu and is a close contact of Ai, the confirmed case in Yinchuan.

Authorities in cities connected to the positive cases, including Xi’an, Gansu’s Jiayuguan and Zhangye, as well as Ejin Banner, have been tracing the close contacts of positive cases and administering mass nucleic acid testing.

As of Monday, Xi’an had traced 1,553 local close contacts of the seven positive cases; 1,133 have returned negative results while the rest of the results are pending.

Jiayuguan on Monday tested 48,764 people, all of whom returned negative results, according to local authorities.

As for the group of eight tourists’ infections, the origin is still unclear.

As local flare-ups of the delta variant continue to pop up around the country in recent months, several provinces have announced plans to roll out Covid-19 vaccine booster shots. They include Henan, Zhejiang and Guangdong, some of which have reported local outbreaks over the past few months.