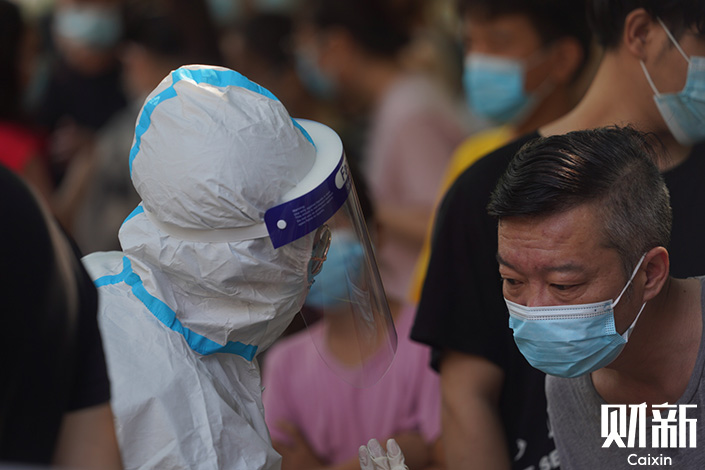 At a press conference Monday, Zhengzhou authorities said two from the first batch of infected patients were found to have contracted the highly transmissible delta variant, as had a previously confirmed patient who entered China from Myanmar and was treated at the city’s Sixth People’s Hospital.

Most of the recent cases were found to be linked to the hospital, which is designated for the treatment of imported cases, authorities said.

A day earlier, Zhao Dongyang, deputy director of Henan’s center for disease control and prevention, said that the latest outbreak in the province was caused by the delta variant that has spread to more than 130 countries.

The Henan outbreak was first identified on Friday when a 39-year-old woman tested positive for Covid-19 during routine nucleic acid testing in Zhengzhou and was transferred to the Sixth People’s Hospital for treatment.

The cities of Shangqiu and Zhumadian also recorded (link in Chinese) three local infections over the past two days, bringing the total number in the province to 78. The three cases were related to the hospital, which has since suspended operations, Caixin has learned.

Wang Songqiang, director of Zhengzhou’s center for disease control and prevention, said the outbreak mainly centers on the hospital, with cleaners and medical workers infected. He also said the outbreak exposed some hospitals’ problems in implementing infection control measures.

On Saturday, two Zhengzhou officials were removed from their posts, including Fu Guirong, Communist Party secretary and director of the city’s health commission, and Ma Shuhuan, party secretary of the hospital.

The metropolis of more than 12 million has kicked off a citywide testing, a key part of China’s anti-Covid playbook to curb a virus resurgence, as well as labeling one neighborhood as a high-risk area and another six places as medium-risk areas. It also ordered some residents to stay at home. Those who want to leave the city by bus, train or plane must present negative tests from the preceding two days.

China reported (link in Chinese) 61 new locally transmitted cases on Monday, up from 55 a day earlier, according to the National Health Commission. Most of the cases were found in the eastern Jiangsu province, where the Nanjing airport cluster has been linked to hundreds of cases in at least 14 provinces.