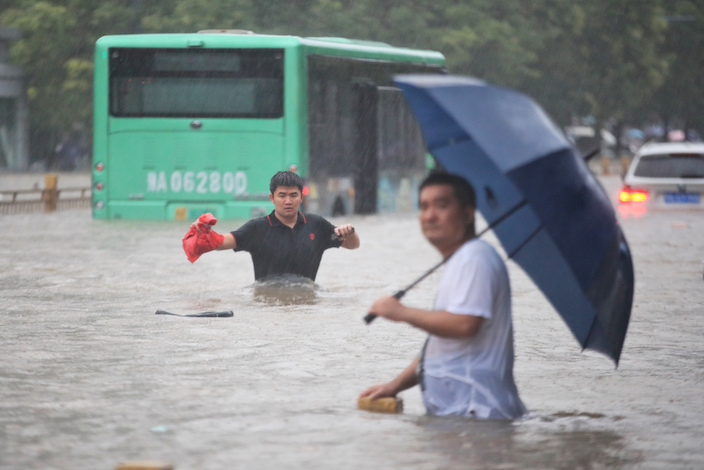 The province's meteorological station issued a red warning, the highest alert, for heavy rain on Tuesday.

A downpour in the Henan capital forced the suspension of subway services Tuesday night, stranding a large number of people. Passengers on one subway train were trapped in waist-deep in murky floodwaters, and underground stations were inundated in water, video clips on social media showed.

After hours of rescue efforts, more than 500 passengers were evacuated from the subway system, authorities said. Twelve people were later confirmed dead (link in Chinese) and five others injured.

Some 200,000 local residents have been evacuated.

Henan, one of China’s most populous provinces with more than 100 million people, has been hammered by storms since the weekend. Heavy rainfall burst the banks of major rivers and flooded streets in several cities, leading the province to close highways, suspend train services and cancel hundreds of flights.

The province’s meteorological station issued a red warning, the highest alert, for heavy rain on Tuesday.

The rainfall has so far affected more than 1.2 million people in the region, local authorities said at a press conference Wednesday afternoon. It has also damaged 20,000 hectares (49,421 acres) of crops, according to data from the province’s emergency management department.

“The flood prevention situation is very severe,” President Xi Jinping said, as thousands of firefighters have been sent to Henan to help search and rescue efforts.

Gongyi, a county-level city under the administration of Zhengzhou, has reported at least four deaths amid the flooding. Heavy rainfall has triggered landslides along roads, cutting off power and water supplies in many areas for over a day. Earlier this week, a rainstorm left one dead and two more missing in the city.

Zhengzhou, located on the banks of the Yellow River, experienced more than 200 millimeters (nearly 8 inches) of rain in just one hour Tuesday. The city received 617.1 millimeters of rain from Saturday evening to Tuesday evening, nearly equivalent to its annual average of 640.8 millimeters.

The Zhengzhou meteorological bureau said the recent downpours were the heaviest on an hourly and daily basis since records began in the city in 1951, and said the city had seen “once in a millennium” rainfall.

The First Affiliated Hospital of Zhengzhou University, with more than 7,000 beds, was flooded and experienced a blackout Tuesday night. The power cut meant medical workers had to use manual ventilators to help patients breathe, a patient’s relative told Caixin. About 600 critically ill patients had been transferred to other hospitals, the state-run People’s Daily reported.

Although floods are common during China’s rainy season, which lasts from June through August, experts said the unusually heavy rain is due partly to the typhoon near the country’s southern coast, over 800 miles from Zhengzhou. From Monday to Tuesday, the city issued five red alerts, the highest warning, for heavy rain.

In 2016, Zhengzhou was chosen to become one of 14 pilot cities involved in the country’s “sponge city” construction program, which was launched in 2014 with the goal of retaining and recycling as much as 70% of cities’ rainfall. The city had invested 53.48 billion yuan ($8.26 billion) in projects such as reinforcing the river banks and building water-permeable roads by 2020, according to official newspaper the Zhengzhou Daily.

The heavy rain is expected to continue to batter the city through Thursday.

In recent days, rain has lashed large swathes of China, including the capital Beijing.

Beijing was hit by heavy downpours last week, leading to around 15,000 people being evacuated from their homes and the cancellation of hundreds of flights.