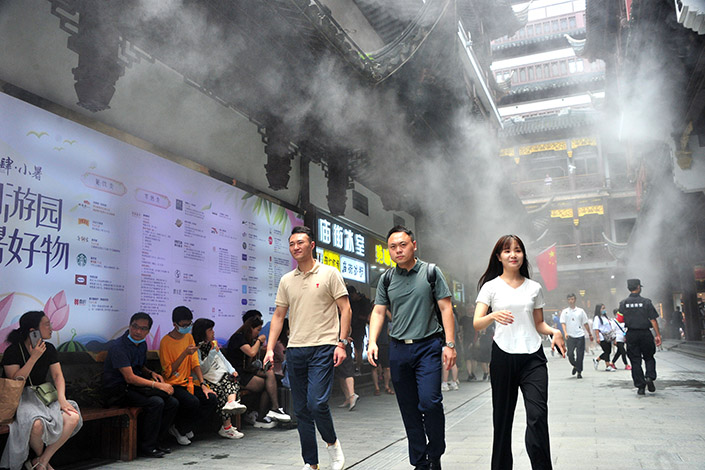 The popular tourist site Yuyuan Garden in Shanghai has installed machines that spray a cool mist on visitors amid the ongoing heat wave in the city. Photo: VCG

Beijing and Shanghai are among places facing the greatest risk from extreme weather conditions in China, according to a new report (link in Chinese) by Greenpeace East Asia.

The warning comes with fresh analysis released by the environmental group Wednesday, highlighting the risk of heatwaves and heavy rainfall across major metropolitan regions around Beijing and Shanghai, and in southern Guangdong province, especially in densely populated urban areas.

The survey of 60 years’ worth of climate data highlights the fast-growing risk of extreme weather in “urbanizing” communities on the outskirts of China’s large cities.

Liu Junyan, climate and energy project leader for the group’s Beijing office, urged local authorities to provide support to at-risk areas, especially those undergoing “rapid urbanization,” as they are not “as well-researched or funded to address climate risk.”

The Chinese capital was hit by heavy downpours on Monday, leading to around 15,000 residents being evacuated from their homes and the cancellation of hundreds of flights, according to Shanghai-based publication The Paper.

China is accelerating efforts to tackle climate change as the world’s biggest emitter of greenhouse gases aims to peak its carbon emissions by 2030 and achieve carbon neutrality, or net-zero carbon emissions, by 2060.

The report said that extreme heat increased from 1961 to 2019 in the Beijing-Tianjin-Hebei metropolitan region, Yangtze River delta and Guangdong province, with growing frequency and duration of heatwaves in all three regions.

Greenpeace said that the increase in temperature in parts of the Beijing-Tianjin-Hebei metropolitan region could exceed 2.6 degrees Celsius by 2100 under the assumption that global emissions reach a peak around 2040.

Beijing is experiencing the fastest increase in average temperature, rising at a rate of 0.32 degrees Celsius every 10 years, it said, with the frequency of heatwaves increasing “considerably” since 2000.

Parts of the Yangtze River delta including China’s financial hub Shanghai, are predicted to experience a more than 25% rise in extreme rainfall, while the northwestern part of Guangdong province will suffer increased drought, according to Greenpeace.

Guangzhou, the capital of China’s most populous province Guangdong, has experienced a total of 98 heatwaves since 1961. Of them, 73 have occurred since 1998.