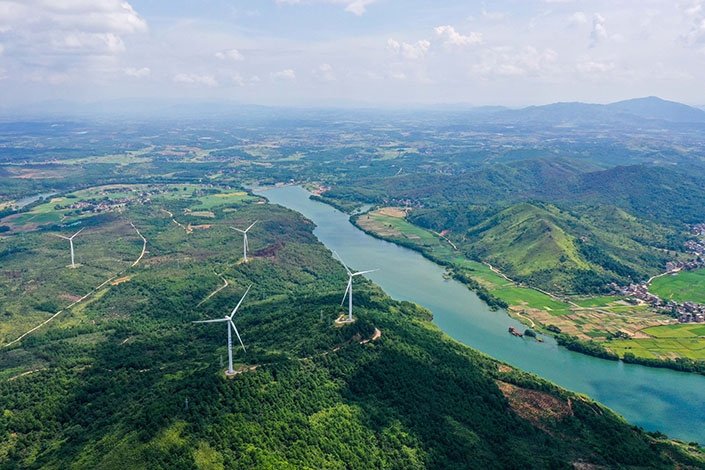 On Oct. 12, Chinese President Xi Jinping delivered a speech at the 15th Leaders Conference of the Convention on Biological Diversity of the United Nations, in which he pointed out that to facilitate the target of achieving carbon peaking and carbon neutrality, China will publish implementation plans and a series of supporting measures for key sectors and industries, furthermore, building a "1+N" policy system.

A recent document from the central government, “Working Guidance for Carbon Dioxide Peaking and Carbon Neutrality in Full and Faithful Implementation of the New Development Philosophy” (Guidance document), released Oct. 24, defined the basic principles and main objectives of the “next step” and laid a foundation for specific implementing rules which will be released in the future. This document serves as the “1” in the “1+N” system, which will function as the top level design for the low-carbon transition work.

To give a brief understanding of what needs to be emphasized in the future, we found four topics to focus on: the construction of the total carbon dioxide emissions control system, the enhancement of mandatory information disclosure, improving the market mechanism and strengthening the low-carbon transition of key emitting industries.

Setting a cap on carbon emissions

China hasn’t announced a target for the specific cap on greenhouse gas emissions. But the recent Guidance document clearly proposes "establishing a total carbon dioxide emissions control system." This enhances the significance of "controlling total carbon dioxide emissions," which is important for carbon peaking and carbon neutrality. At the same time, it declares that China will control the total amount of emissions and carry out follow-up work. It also shows China's determination. More actions are likely to follow.

The total carbon dioxide control system is a comprehensive system, which not only includes the setting of a total carbon dioxide emissions limit but also predicts emissions under different scenarios, while the above work lays on the basis of mandatory information disclosure. The establishment of the cap control system can help coordinate various sectors and solve the dilemma between the situation of China's economic and social development and the goal of achieving carbon peaking before 2030 and carbon neutrality before 2060.

In addition, the confirmation of the total carbon dioxide control target is also the first step for setting the cap for China’s national carbon market.

When policymakers draft green and low-carbon development plans and when companies consider industrial upgrades, they share three key elements: the collection and analysis of data on climate change (greenhouse gas emissions in various fields of production), database research of development trends and the construction of policy models. These are the infrastructure of the plan and the key support for regular evaluation and improvement. Everything needs to be based on detailed data.

First, formulate specific plans for monitoring and verifying greenhouse gas emissions in key industries, implementing it to both the pilot carbon market and the national carbon market.

Second, collect, publicize and analyze relevant information based on the unified data submission platform of the national carbon market.

In the Guidance document, China proposed to carry out action by a "two-wheel drive," that is, the government and the market working as one.

Climate change has become the biggest exogenous factor in economic development for many countries, and China has ambitious goals on carbon peaking and carbon neutrality.

Analysis of the impact of low-carbon transformation on basic economic endogenous factors, such as capital and manpower from the supply side and the demand side, is highly needed. And based on that, a new economic model to adapt to the new development stage for China will be established.

What could be expected in this regard?

First, climate change should be incorporated into the government's fiscal and taxation policies as a key factor. Climate risk should be included in the evaluation of government public investment, government procurement and national debt issuance.

Secondly, improving the carbon pricing mechanism. The main focus is the development of the national carbon emissions trading market, in which the core is to ensure the formation of effective carbon pricing signals. This is not only the basis for guiding the low-carbon transformation of investment and financing, but also the benchmark for measuring climate change by economic value.

Thirdly, establishing a domestic climate investment and financing system based on the carbon pricing signal. At the same time, taking the current international ESG investment trend into consideration and promoting research on the ESG assessment system in line with Chinese characteristics. (ESG refers to evaluating businesses based on their environmental, social and corporate governance policies.) Consider the carbon peaking and carbon neutrality action with social, corporate governance and other environmental factors, optimizing the “weights” of different metrics to avoid negative impact on climate from the “S” and “G” side, and finally mitigate the phenomenon of "greenwashing."

The Guidance document highlights the transitioning and upgrading of various elements of the society. Therefore, in addition to policy planning at the macro level and element design at the micro level, it is also necessary to determine a strong starting point at the mid-level. The key to ensuring stability and the efficient transition of society is to formulate the carbon peaking and carbon neutrality road map for key emitting industries and enhance coordination among industries.

To start with, we should strengthen cooperation among key industries, formulate the implementation plan of carbon peaking in various fields, and update it regularly through technological innovation.

Secondly, promote the research and formulation of carbon neutrality standards in various industries, lay the foundation for defining green low-carbon from the industrial level and use it as a reference for the formulation and research of corresponding standards. It is most important to build the green trading system and communicate it internationally.

Looking at the overall situation, mandatory climate information disclosure will become the key foundation. With that, we can promote policy formulation, build total a carbon dioxide emissions control system, improve market mechanisms and formulate relevant plans and standards for industries. The improvement of the data platform of the national carbon market is the premise of information disclosure. In addition, as more industries will be incorporated into the national carbon market, the market mechanism will also provide effective assistance for the low-carbon transformation of industry.

Wang Ying is a program manager at Environmental Defense Fund.