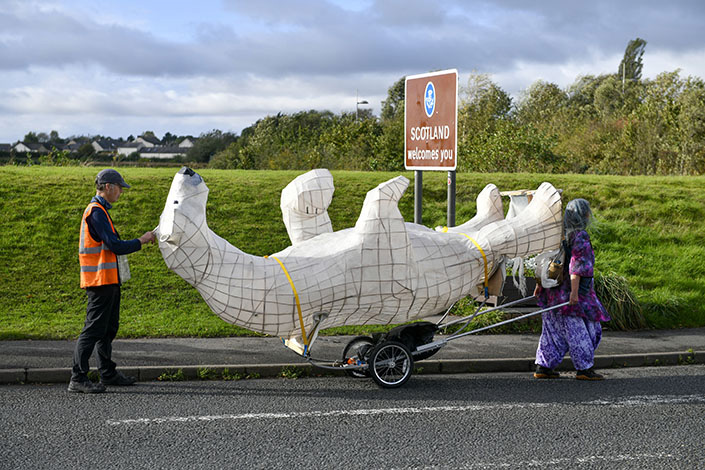 Political negotiations are all about political will. Particularly, for the United Nations’ climate talks — negotiations that have brought politics, science, industrial policy and moral high-ground for the future of mother earth into ongoing contact for almost 30 years — political will is all that matters.

Now all eyes are on the Scottish city of Glasgow where the final round of U.N. climate talks this year will begin on Oct. 31. Highlighted as the best chance to save the planet from irreversible global warming, more than 150 parties to the U.N. climate convention are once again urged to show their most responsible political will.

Sources in climate circles told me that Xie and Kerry consulted on what the final decisions of the Glasgow conference would look like, and expressed mutual willingness to manage their differences and disputes over respective negotiating positions over the course of the upcoming two-week conference.

Six years ago in Paris, these two top climate veterans from Beijing and Washington successfully brokered the Paris Agreement, which got the world to agree on limiting the rise of global average temperature well below 2 degrees Celsius — and preferably 1.5 C — above pre-industrial levels. Now, parties are looking to China and the U.S. to again show strong leadership and finish the work on outstanding issues in Glasgow.

On one hand, the political agreement reached in Paris in 2015 needs to be translated into concrete actions, such as the developed countries’ pledge to support developing countries’ capacity building for climate change adaptation to the tune of $100 billion a year, starting in 2020.

Parties are also required to update their emission reduction ambitions, known as Nationally Determined Contributions (NDCs). On this matter, China, the U.S. and India, the three largest emitters, will be most under the spotlight.

On the other hand, China and the U.S. — despite their fierce, relentless competition in pursuing economic and geopolitical dominance — also need to show the world that they are willing and able to cooperate when needed in addressing a climate crisis that threatens us and the planet.

Meanwhile, the climate scenario this century looks horribly bleak. In August, the U.N. warned that the world has already warmed 1.1 C above pre-industrial levels; and it will rise by 2.7 C by the century’s end. “The world is on a catastrophic pathway,” lamented U.N. Secretary-General António Guterres last month. He said the current emission reduction commitments fell “far short” of the Paris Agreement targets.

But from a politically realistic perspective, have the largest emitters had the political will to raise their emission reduction ambitions further in Glasgow? Probably not.

China at this stage appears to have exhausted its climate policy toolbox, making its climate commitment package as ambitious as possible: pledging a carbon peak before 2030, carbon neutrality by 2060, a ban on new coal projects overseas, rolling out a national carbon market, and accepting the Kigali Amendment to the Montreal Protocol to tighten regulations over non-CO2 emissions.

For the U.S., although President Joe Biden wants to basically double the emission reduction targets set by his Democratic predecessor Barack Obama in 2015, his hands are tied by the U.S. Congress, which is currently reluctant to approve his $555 billion spending budget for climate measures. His ambitious decarbonization pledges are likely to become a “mission impossible” without legislative support, let alone the U.S.’ share of finance support for developing countries.

India’s political will appears shaky ahead of Glasgow. In September, Kerry traveled to India to get New Delhi on board for a more ambitious national commitment. But R.K. Singh, India’s power minister said after meeting Kerry: “Look, come next election, you may have Trump back. So then what happens?” Clearly, the former U.S. president’s withdrawal of America from the Paris Agreement in early 2017 left a lasting shadow over global climate efforts.

Ultimately, the big picture is that while the Paris Agreement succeeded the Kyoto Protocol as the sole international climate treaty, there is hardly any enforcement or punishment mechanism in the global climate governance regime. Members are setting their own climate agenda out of their own domestic interests at their own pace. In other words, no one can force anyone else to do anything, or punish anyone for lagging behind.

To cover international negotiations, there is always a journalistic tendency for the press to expect some kind of drama. The most astonishing moment for me and for everyone on site at the Bella Center in Copenhagen during the 2009 U.N. climate conference on Dec. 18, was when the then-U.S. President Obama, together with his top aides including former Secretary of State Hillary Clinton, unexpectedly and forcibly entered a closed-door meeting of developing countries, including China, and asked China’s former Premier Wen Jiabao, who sat at the table: “Are you ready to meet me, Mr. Premier?”

The Copenhagen episode reflects just how intense global climate negotiations can become. But as for now, few insiders are expecting Glasgow to bring us any surprises or breakthroughs.

Zhenhua Lu is a senior editor at Caixin Global.

The views and opinions expressed in this opinion section are those of the author and do not necessarily reflect the editorial position of Caixin Media.