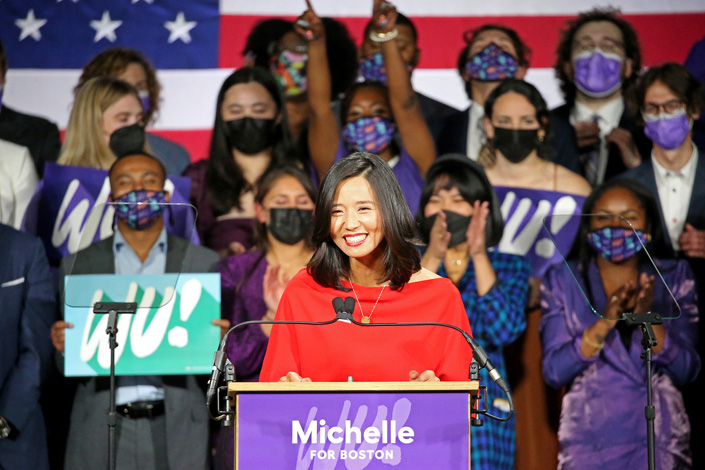 American progressives just love the thrill of making history. On Tuesday night, they cheered for yet another historic moment when Michelle Wu (吴弭), a Democrat and daughter of immigrant parents, won the mayoral race in Boston. The 36-year-old became the first woman and first Asian American elected to the seat in the city’s hundreds of years of history.

Wu’s victory becomes even more significant in American identity politics when we consider the fact that Wu is not a Boston native. Historically, Boston has only elected white men as mayor, and typically elects mayors who have lifelong Boston roots, according to local media. On the contrary, Wu grew up in Chicago and did not move to Boston until attending Harvard in 2007.

Just as on similar occasions before, Wu’s victory quickly resonated in China’s elite circles, being hailed as yet another sign of the rising representation of ethnic minorities, including Chinese Americans, in white-dominated U.S. politics.

Deng Jin, an alumni of the prestigious Nieman Fellowship at Harvard University, said on her social media that Wu’s victory reflected two trends: the continuous rise of minorities on the U.S. political stage since America elected the first black president in Barack Obama; and particularly, the Chinese American’s increasing interest in politics.

“I saw many friends and their children who are still high school students [in the U.S.] are rejecting the traditional philosophy of life of keeping themselves away from politics, instead, actively participating in political campaigns such as local lawmaker elections and presidential primaries, ” she wrote, “Andrew Yang’s running for president was a typical case.”

Those two trends, she continued, demonstrated that the liberal values have enjoyed popular support and that the U.S. has been undergoing a demographic transition with structural changes. Other minorities will be seen as equal to white people, she reckoned.

Deng’s view is not isolated. Remember the fanfare in China in 2011 when Gary Locke became the first Chinese American to serve as the U.S. ambassador in Beijing? The day he departed Seattle for Beijing, a photo of him carrying his own knapsack and ordering his own coffee at the airport went viral on Chinese social media platforms. Many praised his humble and low-key style.

But, Wu’s success is unique as every election is unique. She is considered a protegee of Elizabeth Warren, one of the leaders in the American progressive movement, who was one of Wu’s professors in Harvard and called Wu “family.” She also worked on Warren’s 2012 U.S. Senate campaign. In the intricate U.S. election system, Wu obviously has advantages that Andrew Yang did not in his failed bid for New York City mayor this year. And so her success cannot be 100% copied elsewhere.

Zhenhua Lu is a senior editor at Caixin Global.