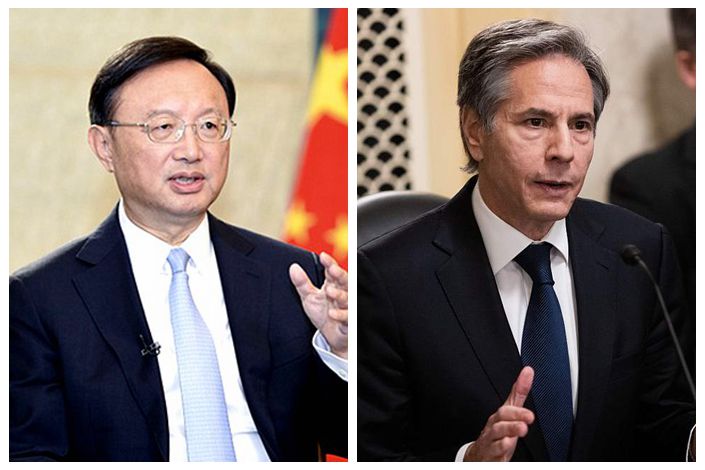 With all eyes on the first in-person official dialogue between China and the new U.S. administration in Anchorage, Alaska, on Thursday, tough stances from each side indicate the high-profile meeting will not be a first step towards a reset of the icy bilateral relationship.

Instead, it will be the precursor of a new round of tense competition and confrontation, with limited cooperation between Beijing and Washington that could last a decade.

The two sides have already been in conflict over the nature and principle of the talks. Chinese foreign ministry spokesperson Zhao Lijian said last Thursday that the meeting will be a “strategic dialogue,” which would “focus on cooperation, manage differences, and bring the China-U.S. relationship back to the right track of sound and steady development.”

On the same day, Secretary Blinken made a statement that was in direct contrast with Zhao’s characterization of the talks.

He told the U.S. House Foreign Affairs Committee: “This is not a strategic dialogue. There’s no intent at this point for a series of follow-on engagements. Those engagements, if they are to follow, really have to be based on the proposition that we’re seeing tangible progress and tangible outcomes on issues of concern to us with China.”

Moreover, in a Tuesday preview for the press, a senior U.S. official echoed Blinken’s statement that the Alaska meeting is “one-off” and “not the resumption of a particular dialogue mechanism or the beginning of a dialogue process.” In other words, the meeting is only for getting to know each other, not for detailed negotiation.

But after four years of bitter confrontation between China and the U.S. under the Trump administration, there isn’t much room for the two sides, particularly Beijing, to make concessions.

China has already laid out its bottom line. Its ambassador to the U.S., Cui Tiankai, who arrived in Anchorage ahead of the meeting, explicitly told the U.S. to give up their “unrealistic expectations or illusions” that China would compromise on issues involving the country’s “core interests,” such as Hong Kong, Xinjiang and Taiwan.

In Beijing, Wang Yi issued a warning on Mar. 7, during the country’s annual national political gatherings, that accused the U.S. of “willfully interfering in other countries’ internal affairs in the name of democracy and human rights.”

On the U.S. side, the White House said it would not rush out its China approach until finalizing a comprehensive review of the former administration’s China policy. But in early February, President Biden used his first foreign policy speech to label China as “the most serious competitor.” In March, Blinken also made it clear that: “Our relationship with China will be competitive when it should be, collaborative when it can be, and adversarial when it must be.”

The U.S. side’s statements reveal that Washington has no plan to roll back Trump’s confrontational approach. It’s obvious that except for potential collaboration in limited areas, such as pandemic response and climate change, being competitive and adversarial will be the future theme of China-U.S. relations. Nothing ambiguous anymore.

Thus, no matter what results can come from the Alaska meeting, the world’s most consequential relationship will only get more systematically stressed. And no matter whether Democrats or Republicans win the U.S. presidential elections in 2024 or 2028, we are going to see at least 10 years of frosty ties between Beijing and Washington. So, let’s hope that military conflicts between the two sides don’t happen, either in the Taiwan Strait or South China Sea.

The challenge of managing the current relationship is immense and unprecedented. Neither side will willingly disengage from the ongoing competition in areas such as cyber technology and the arms race across the Asia-Pacific.

The old way of compartmentalizing China-U.S. relations, or relying on any single so-called stabilizing force to avoid sinking the whole ship will not work anymore. All compartments are interlinked. If one catches fire, the only solution is to put it out as fast as possible. Otherwise, it will spread through the whole system, just as happened during the Trump administration. At first, it was an argument about the bilateral trade deficit, then it became a trade war, and then it spread to tech decoupling, expulsion of journalists, visa wars, scholar prosecutions and tit-for-tat sanctions.

As China’s prominent U.S. scholar Wang Jisi perfectly put it, the real issue now for Beijing and Washington is not about how to rebuild mutual trust, but how to prevent political distrust from growing to the point that it leads to more decoupling in social, economic, and technological terms, and turns into a head-on confrontation.

Lu Zhenhua is a senior editor at Caixin Global.