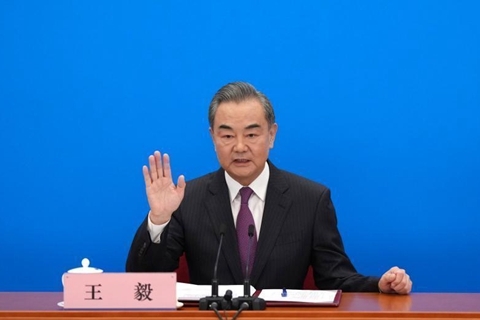 Wang also urged the United States to reopen dialogue with China and abolish all the restrictions imposed on the country as part of efforts to reset China-U.S. relations.

At a wide-ranging press conference about China’s foreign relations during the annual national political gatherings in Beijing, Wang told reporters, “I can say it explicitly that China will honor its commitment in the agreement, including making efforts to ratify relevant international labor conventions.”

The foreign minister’s confirmation came a week after President Xi Jinping called for joint efforts for an early entry into the China-EU Comprehensive Agreement on Investment (CAI) during a phone conversation with his French counterpart Emmanuel Macron late last month.

The two sides announced on Dec. 30 that they had concluded the investment agreement that would grant European companies expanded access to the world’s second-largest economy.

According to EU Ambassador to China Nicolas Chapuis, China made a key concession to ratify the fundamental conventions of the International Labor Organization (ILO), clearing the final hurdle for the talks to be concluded before the year-end deadline.

“In the face of crisis and challenges, China-EU relations have demonstrated resilience and vitality sending out a positive message to the world,” Wang said at Sunday’s press conference.

He dismissed the notion that China is trying to sow division between Europe and the United States by improving its relations with the EU. The China-EU relationship is “equal” and “open,” he said, adding that the two sides are “not targeting any third party or controlled by anyone else.”

Regarding China as the “most serious competitor,” U.S. President Joe Biden’s administration has been advocating for a coordinated approach with its allies and partners in the EU and Asia in dealing with Beijing.

U.S. Secretary of State Antony Blinken and Secretary of Defense Lloyd Austin will travel to Japan and South Korea in mid-March for foreign policy coordination in the Indo-Pacific region. In a foreign policy speech last week, Blinken said: “Our relationship with China will be competitive when it should be, collaborative when it can be, and adversarial when it must be.”
In Beijing, Wang accused the U.S. of “willfully interfering in other countries internal affairs in the name of democracy and human rights.”

“This created lots of trouble in the world and in some cases, turbulence and conflict,” he said. “It is important that the United States recognizes this as soon as possible. Otherwise, the world will remain far from tranquility.”

Wang called on the U.S. to “remove all its restrictions on bilateral cooperation as early as possible, (and) not create new obstacles," adding that the two sides should manage differences “effectively through candid communication to prevent strategic miscalculation and avoid conflict and confrontation.”