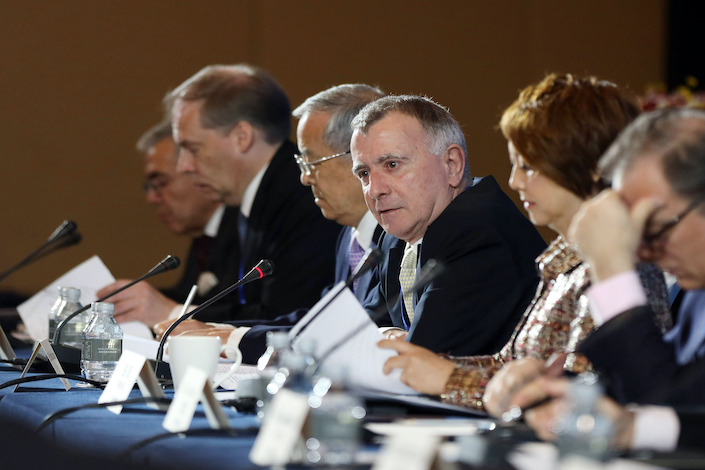 EU Ambassador to China Nicolas Chapuis at a forum in Beijing in November.

China and the European Union were just a week away from missing the year-end target for their sweeping new investment accord when China made a key concession on accepting international conventions on forced labor, EU Ambassador to China Nicolas Chapuis told Caixin in an interview.

China's last-minute commitment to ratify the fundamental conventions of the International Labor Organization (ILO) cleared away the final hurdle, the French diplomat Chapuis said. Chinese and European leaders announced a political agreement on bilateral investment Dec. 30, opening China to expanded access by European companies. The two sides have since been finalizing the legal text.

Chapuis, who was involved in the intense December negotiations, said the EU was still not ready to come to an agreement just a week before the deadline.

"We were lacking something important for us on the last chapter about forced labor," Chapuis said. "The language that China had given us was not enough."

The Chinese government realized that "if they did not accommodate our concerns on ILO conventions, then there would be no deal ... at least no deal before the end of the year," Chapuis said.

According to the ILO, China has ratified four of the eight fundamental labor conventions, including those on nondiscrimination and child labor. China has been a member of the United Nations' labor watchdog since the formation of the organization in 1919 under the old League of Nations.

“It took the Chinese side about a week to tackle the issue and come back to us" Chapuis said.

After the Dec. 30 announcement, China's Ministry of Commerce said in a statement without elaboration that "the China-EU investment agreement specifically provides for investment-related environment and labor issues."

"The two sides are committed to promoting investment conducive to sustainable development goals, properly handling the relations between attracting investment and protecting the environment and labor rights, and complying with relevant international commitments," ministry said.

"This is something that many people, both in China and in Brussels, thought would never happen," the EU ambassador said. After securing endorsements from EU member states Dec. 28, Brussels then confirmed that a leaders' summit would be possible, Chapuis said. "So we say politically, we are in a partnership between Europe and China."

The legal text is expected to be finalized in the second half of 2021 and possibly be ratified when France holds the rotating EU presidency in first half of 2022, according to Chapuis. He also said the two sides would hold a summit next year, in either Brussels or Beijing.

The EU's goal for the agreement is to "rebalance" the bloc's economic status with China and the U.S. after Beijing and Washington signed a phase-one trade deal, Chapuis said.