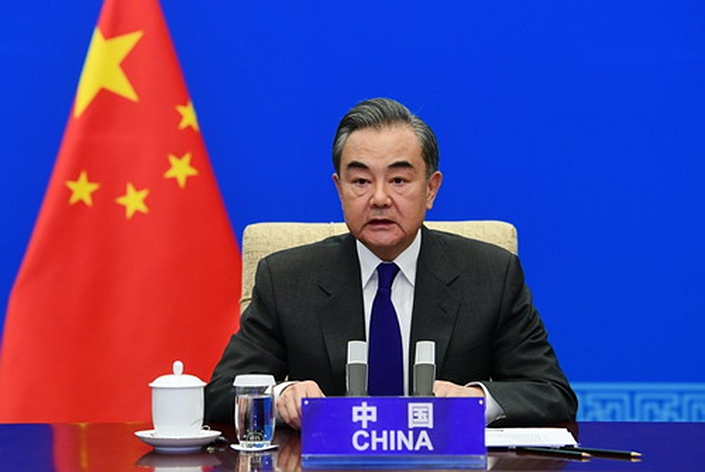 China and the United States should work together to reopen dialogue and “build up goodwill” to repair their damaged relationship, Chinese state councilor and Foreign Minister Wang Yi said Monday.

China stands ready to “resume candid communication with the U.S. and engage in dialogues aimed at solving problems,” Wang said at a forum in Beijing (link in Chinese). The severing of all levels of dialogue between the two countries over the past few years is one of the main reasons behind the deteriorating relationship, Wang said.

Wang called on Washington to remove tariffs on Chinese goods and lift restrictions on China’s tech sector as “necessary conditions” for rebuilding the relationship.

“We hope the U.S. will adjust its policies as soon as possible,” Wang said. China would like the U.S. to remove tariffs and sanctions on companies and “abandon irrational suppression of China’s technological progress,” the foreign minister said.

U.S. Treasury Secretary Janet Yellen said last week that Washington would keep the Trump tariffs in place for now but would evaluate how to proceed after a thorough review.

Wang said the two sides may start with easier issues, interact actively and build up goodwill under current circumstances. He said China is willing to work with the U.S. on Covid-19 pandemic control, climate change and a global economic recovery.

“With the emergence and unfolding of global challenges, the areas where China and the United States need to cooperate are not fewer, but more,” he said. “The space for cooperation is not narrower, but wider.”

Wang reiterated Chinese leaders’ call for the two countries to manage differences and move toward each other. He said the recent phone call between Xi and Biden could lay the groundwork for more discussions.

In their first official call since Biden took office, the two leaders pledged to find more common ground. Xi said the two countries could open up more contact in economic, financial, law enforcement and military spheres and called for “reestablishing” dialogue to foster mutual understanding and “avoid misunderstandings and misjudgments.”

Biden “committed to pursuing practical, results-oriented engagements when it advances the interests of the American people and those of our allies.”

While both sides have cautiously sought to stabilize a relationship shaken under Trump, Biden has signaled plans to retain some of his predecessor’s China policies. The relationship between the two countries is unlikely to experience a radical change, experts said.

Several Chinese experts said Biden’s cabinet picks indicate that the new administration will continue to be tough on China with a focus on intense competition.

Biden’s policy would fall somewhere between that of former U.S. President Barack Obama’s engagement approach and Trump’s decoupling strategy, with a focus on competition with Beijing, while enhancing cooperation with America’s regional allies in containing China, Gao Ruidong, chief macroeconomist at Everbright Securities Co. Ltd., said in a Caixin column.

In his first foreign policy address since assuming office, Biden vowed to take on challenges posed by China, describing it as America’s “most serious competitor,” but he also signaled hopes for cooperation in a manner beneficial to Washington.