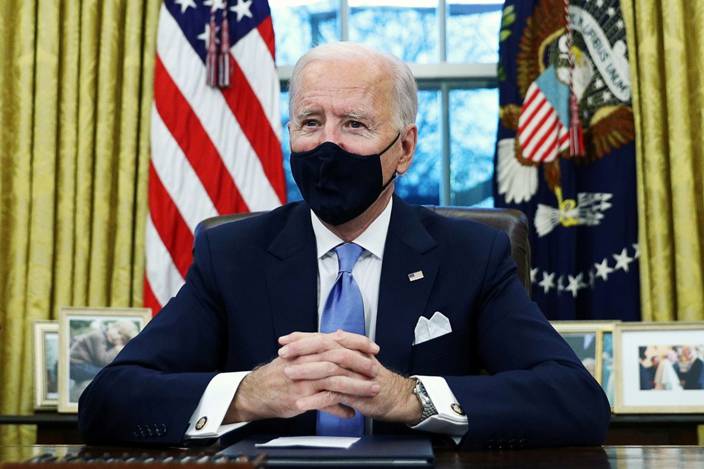 During the confirmation process, some Biden officials have publicly stated their policy views on China. The new president’s pick for secretary of state, Anthony Blinken, vowed that the U.S. can “outcompete” China, while the Treasury secretary nominee, Janet Yellen, said she will “take on China’s abusive, unfair and illegal practices.”

Chinese experts including Caixin columnists have analyzed the new cabinet’s policy priorities, particularly in regard to China. They believe that the “elite” Team Biden will continue to be tough on China with a focus on “intense competition.”

Describing Biden’s cabinet picks as “elite experts,” Gao said the cabinet picks lean toward an establishment view, and they don’t have extreme political opinions. Thus, Biden’s policy would be more predictable. Twelve of the cabinet nominees graduated from Ivy League universities and 17 have doctorates.

Regarding Biden’s China policy, he said it would fall somewhere between Obama’s engagement approach and Trump’s decoupling strategy, with a focus on competition with Beijing, while enhancing cooperation with America’s regional allies in containing China.

He added that the new administration would also elevate human rights issues and reclaim the U.S.’ global influence. Washington would also compete with Beijing on technology more intensely, including 5G, artificial intelligence and space.

Tu Xinquan, a trade expert at the University of International Business and Economics in Beijing, argued in a commentary for Caixin that Biden is a representative of the Democratic Party establishment and his policy propositions come out of the liberal traditions that the party has upheld for a long time.

In a March 2020 article in Foreign Affairs magazine, Biden said that a government under his leadership would quickly take measures to renew the United States’ democracy and alliances. He also openly criticized Trump’s trade policy saying he “launched an unwise trade war that harmed both U.S. allies and the American middle class.”

Given Biden’s own statements and the Democratic Party’s campaign documents, a “return to tradition” will be a major feature of his administration’s trade policy, Tu said.

He said that the Biden administration’s policies toward the World Trade Organization (WTO) and the Comprehensive and Progressive Agreement for Trans-Pacific Partnership (CPTPP) — an 11-country trade agreement in Asia-Pacific — will be an equally important reflection of his trade policy.

He predicted that the U.S will not hesitate to use its potential return to the CPTPP as a tool against China. Biden said at a Council on Foreign Relations event last year that although the CPTPP is not a perfect deal, it is a good way to “contain China’s excessive behavior.” The United States may cater to the some countries’ wishes by “not relying too much on the Chinese market.”

Yu Xiang, a nonresident researcher of the Center for International Security and Strategy at Tsinghua University, said in a Caixin commentary (link in Chinese) that after Biden took office, the main line of his policy is not be the economy, but science and technology.

The Biden administration will increase investment in science and technology research and development, and will drive other policies by emphasizing investment in this area, he said.

He predicted that domestic antitrust investigations into internet giants such as Google LLC and Facebook Inc. will continue during Biden’s tenure. In May 2019, Biden told the Associated Press that breaking up large tech companies “is something that we need to take a serious look at.”

Externally, the Biden administration will seek to reduce dependence on external supply chains, including those from China, in key areas, he said.

The new administration will produce a more detailed list of U.S. imports, identify core and higher value-added supply chain products, and promote the relocation of supply chains back to the U.S., Yu said.