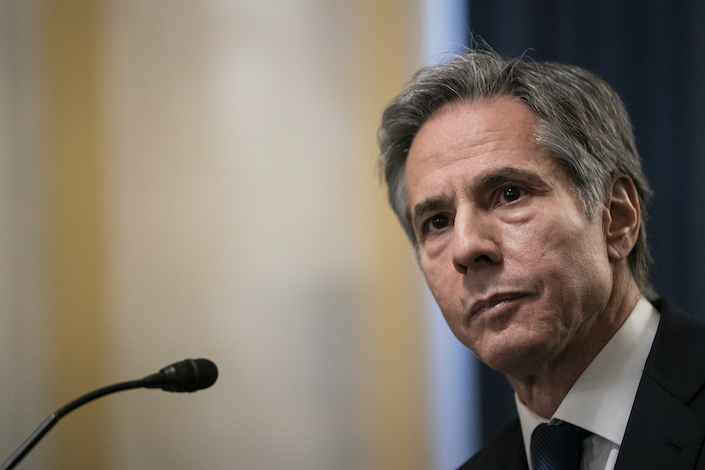 Antony Blinken speaks during his confirmation hearing to be Secretary of State before the US Senate Foreign Relations Committee on January 19, 2021 in Washington, DC.

The 58-year-old diplomat told lawmakers that China "no doubt" posed the most significant challenge to the U.S. and said he thought there was a strong bipartisan foundation for countering Beijing's rising influence.

If confirmed, Blinken will succeed former Secretary of State Mike Pompeo, who was accused by the Chinese foreign ministry of conducting "lying diplomacy" on a series of issues including the pandemic’s origin, Hong Kong and Xinjiang.

Bilateral ties between the world's two largest economies hit a low point under the Trump administration, and the Biden White House is expected to continue Trump's China policy of being tough on Beijing.

“President Trump was right in taking a tougher approach to China,” Blinken said during the hearing. “I disagree very much with the way that he went about it in a number of areas, but the basic principle was the right one, and I think that’s actually helpful to our foreign policy.”

He said China abandoned decades of “hiding their hand and biding their time in terms of asserting their interests beyond China’s borders.”

“They are much more assertive in making clear that they seek to become in effect the leading country in the world, the country that sets the norms, that sets the standards, and to put forward a model they hope other countries and people will ascribe to,” he said.

Campbell, a former top Asia diplomat, has also advocated being tough on China and largely incorporated the Trump administration’s Indo-Pacific strategy into his thinking about U.S. policy toward China, based on his writings.

As a co-author of an opinion piece in Foreign Affairs magazine last week, Campbell wrote that for today’s Indo-Pacific strategy, there are “the need for a balance of power; the need for an order that the region’s states recognize as legitimate; and the need for an allied and partner coalition to address China’s challenge to both.”