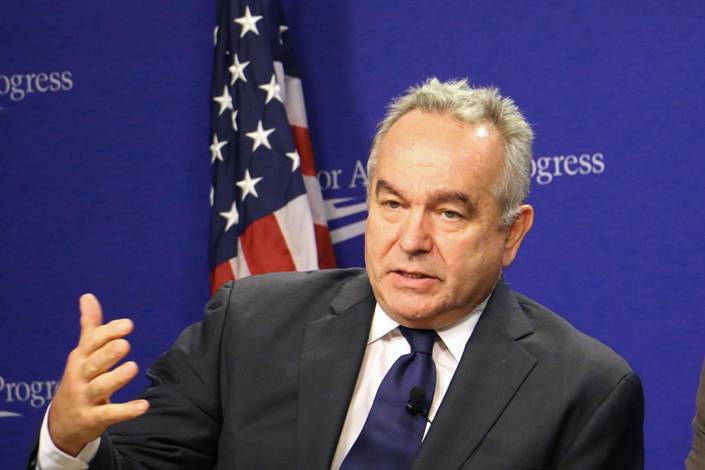 Kurt Campbell, a veteran foreign policy expert and former U.S. assistant secretary of state on East Asian and Pacific affairs from 2009 to 2013, has been appointed as a coordinator for the Indo-Pacific on Biden’s National Security Council at the White House.

He will also become a deputy assistant to Biden, according to the Asia Group, a Washington-based consulting firm where Campbell is chairman and co-founder.

Laura Rosenberger, a senior fellow at the Washington-based German Marshall Fund think-tank, will become a senior director for China at the NSC. She was also a foreign policy advisor for former secretary of state Hillary Clinton.

Rosenberger said on Twitter that she is “honored to be joining” Biden’s National Security Council and “humbled by the enormity of the task.”

Campbell’s newly established post, likened to an “Asia Tsar,” is designed to integrate China policy across different government agencies “with a veteran Asia expert at the helm,” the Financial Times reported on Wednesday, citing a source familiar with the decision.

It was not immediately clear whether Campbell will be authorized to oversee all of the NSC’s Asia-related policy planning, which is separately tasked to four directors for South Asia, East Asia and Oceania, Russia and Central Asia, and China.

Campbell's appointment showed the new administration wants to consider Asia as a whole in policy planning, as well as prioritize key policy goals for the region, Diao Daming, a U.S. expert at Renmin University in Beijing told Caixin.

“It's highly likely that Campbell would continue to enhance the U.S.’ regional alliances in Asia to consolidate American leadership as a way to counter China,” he said.

He added it is still too early to say what influence Campbell will have on China policy in his new role. Observers believe that at the NSC, Rosenberger is closer than Campbell to their boss, the incoming national security advisor Jake Sullivan, also a Clinton adviser. That indicates that Rosenberger could have more say on China policy.

Rosenberger previously served as NSC director for China and Korea in Obama’s White House. She was also chief of staff to the then-deputy secretary of state, Antony Blinken, who has been nominated by Biden to become his secretary of state.

Campbell was the key driver of the U.S. “Pivot-to-Asia” strategy, formulated in the first term of the Obama administration to shift the U.S. geopolitical priority from Europe and the Middle East to Asia. That included a focus on both cooperation and competition with China in regional security and economic areas.

Since 2017, the Trump administration has adopted a new Indo-Pacific strategy that includes a more confrontational approach mainly focused on countering China’s global influence, which led to the worsening of China-U.S. ties.

Campbell has largely incorporated the Trump administration’s Indo-Pacific strategy into his thinking about U.S. policy towards China, based on his previous writings.

In one of those, a co-authored opinion piece published by Foreign Affairs magazine on Tuesday, Campbell wrote that for today’s Indo-Pacific strategy, there are “the need for a balance of power; the need for an order that the region’s states recognize as legitimate; and the need for an allied and partner coalition to address China’s challenge to both.”

Campbell also said in a 2018 article, titled “The China Reckoning,” also published by Foreign Affairs, "Neither carrots nor sticks have swayed China as predicted. Diplomatic and commercial engagement have not brought political and economic openness. Neither U.S. military power nor regional balancing has stopped Beijing from seeking to displace core components of the U.S.-led system.”

However, he also said on Thursday during an Asia Society think-tank panel discussion that the two countries could make small steps to unlock the current deadlock in bilateral ties, including reversing expulsions of journalists, reopening closed consulates and easing visa restrictions.

Campbell also told a China Development Forum last November that the U.S. and China should restore bilateral dialogue mechanisms such as strategic and economic dialogues that had been scrapped by the Trump administration.

More risk-control mechanisms should be established to manage and prevent crises from escalating, he said, adding that areas of cooperation between the two countries include pandemic response, vaccine development and climate change.

Zha Daojiong, a professor of international relations at Peking University, told Caixin that Campbell's job description is “carved in stone” as described in documents on Trump’s Indo-Pacific strategy.

“Since there is not that much difference in ideas framed as either ‘Pivot-to-Asia’ or ‘Indo- Pacific,’ Mr. Campbell does seem to be expected to translate his advocacy into action,” Zha said, “Part of that action may well be continuation of the bulk of Asia and China policies under Trump.”