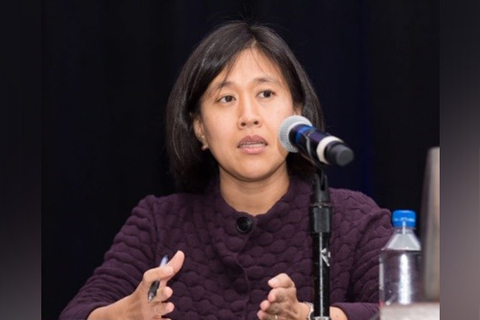 Tai, who currently serves as chief trade counsel on the House Ways and Means Committee, was a key figure in trade negotiations. Before her work on Capitol Hill, she spent seven years as an attorney with the Office of the U.S. trade representative (USTR) specializing in enforcing agreements with China, prosecuting several cases on Chinese trade practices at the World Trade Organization.

Tai would be responsible for enforcing U.S. trade policies, including when or whether to start lifting tariffs on $370 billion of Chinese imports imposed by the Trump administration.

Neither Tai nor Biden’s transition team responded to the possible nomination as reported by almost all major media, including The Wall Street Journal and The Washington Post.

The U.S. trade representative, a Cabinet-level position that carries the rank of ambassador, is normally a low-profile post, but in the Trump administration, Trade Representative Robert Lighthizer played a central role in formulating economic and trade policy toward China.

By selecting an experienced trade lawyer with expertise on China as U.S. trade representative, Biden would signal his intention to start working swiftly on pending trade issues with China, analysts said.

Biden has signaled he would return to multilateral trade agreements in a shift from Trump’s nationalistic approach, but he has said he would not make any “immediate moves” to lift the tariffs Trump imposed on Chinese goods.

Tai is considered to have an aggressive attitude toward China on trade and labor issues. She has said China needs to be confronted strongly and strategically.

In public comments at an August think-tank event in Washington, Tai said Trump’s tariff actions on China were largely “defensive,” and America needs a progressive trade policy that has both offensive and defensive elements.

While she was a top lawyer on China issues with the USTR between 2011 and 2014, the Obama administration initiated seven disputes at the WTO regarding China’s policies on wind power, rare earth minerals and the auto industry. These disputes, including consultations and panel investigations, accounted for about 30% of the total disputes initiated by the U.S. against China at the WTO since 2004.

Tai worked on additional China-related issues during her time in the House, including legislation to block products allegedly produced using forced labor from Uighur Muslims and other minority groups in China.

Tai is backed by some prominent lawmakers, including Ohio Democratic Senator Sherrod Brown, who said she is “uniquely prepared to tackle issues on China.”

Tai earned a law degree from Harvard University and a bachelor’s degree from Yale. In 1996, as a Yale-China fellow, she taught English for two years in Guangzhou. Her parents came to the U.S. from Taiwan.