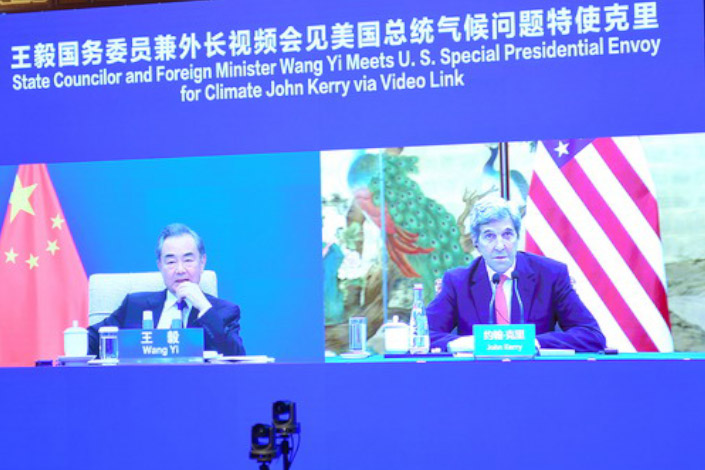 Chinese Foreign Minister Wang Yi has urged Washington to “meet halfway” to get the bilateral relationship back on track, saying China-U.S. cooperation on climate change cannot be sustained without improved ties.

As two great world powers, “cooperation is the only right choice and the keen expectation of the international community,” Wang said during a virtual meeting with the U.S. Special Presidential Envoy for Climate John Kerry on Wednesday.

“The United States should work with China to meet each other halfway and take positive actions to bring China-U.S. relations back on track,” Wang said. “China-U.S. cooperation is in the interest of both sides, benefits humanity and has broad development prospects.”

He noted such cooperation on reducing emissions “cannot be divorced” from the broader relationship between the two sides.

The meeting, held via video link, comes as Kerry is visiting the northern city of Tianjin this week to meet with his Chinese counterpart Xie Zhenhua for discussions on bilateral climate cooperation ahead of the upcoming United Nations climate talks from late October to mid-November.

As the world’s largest carbon emitters, the two sides see climate change as an area with cooperation potential, offering a possible path to reengagement after four years of turbulent ties while Donald Trump was U.S. president.

China has pledged to peak its carbon emissions before 2030 and reach net-zero carbon emissions by 2060. President Joe Biden has vowed to reduce U.S. greenhouse gas emissions as much as 52% by 2030, doubling the commitment made by President Barrack Obama under the 2015 Paris Climate accord.

Wang said China and the U.S. had “carried out fruitful dialogue and cooperation bilaterally and on major international and regional issues including climate change, delivering tangible benefits to the two countries and two peoples.”

However, in recent years bilateral ties “have taken a sharp turn for the worse and are facing serious difficulties” due mainly to the U.S. making “a major strategic miscalculation about China,” said Wang.

The China-U.S. cooperation should be carried out “based on the principles of mutual respect, equality and mutual benefit, instead of one-way traffic,” Wang said, adding “The ball now is in the U.S. court.”

Wang said the U.S. should “attach importance to and actively respond” to the “two lists” and “three bottom lines” proposed by China during his meeting with U.S. Deputy Secretary of State Wendy Sherman in Tianjin in July.

The so-called “two lists” and “three bottom lines” are a basket of demands that include advising the U.S. to “exercise caution” when dealing with matters related to Taiwan, Hong Kong, Xinjiang, Tibet and the South China Sea.

They also urge Washington to respect China’s sovereignty, security and development, and stop interfering in China’s internal affairs, all of which are considered “red lines” that Beijing has warned must not be challenged.

In response, Kerry agreed that the China-U.S. cooperation is crucial to addressing the pressing challenges of climate change and said the U.S. is willing to promote mutual respect, and strengthen bilateral communication and dialogue to jointly set an example for advancing the goals of the Paris Agreement.

Kerry also said the U.S. was keen to create opportunities to address the difficult issues facing the China-U.S. relationship.

On Tuesday, Qin Gang, China’s new ambassador to the U.S., said at a press conference that “Some people believe that China is betting against America, and China’s goal is to challenge and displace America. This is a serious misjudgment of China’s strategic intention. Everything the Communist Party of China does is for the purpose of meeting the people’s aspiration for a better life.”

“China never bets its own future on other countries. We only want to surpass ourselves. We never take surpassing the U.S. as our goal, and we never have the ambition to challenge and displace America, or to seek hegemony in the world,” he noted.