Shanghai Wins Applause for Its Handling of Disneyland Covid Emergency

By Jia Tianqiong and Cai Xuejiao 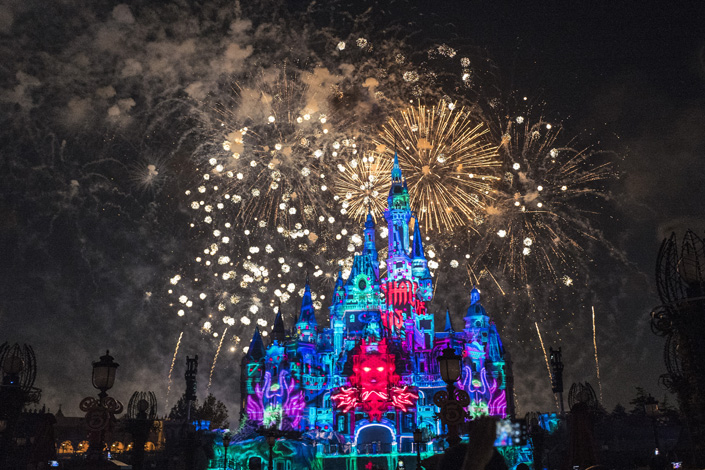 When tens of thousands of visitors were waiting to take nucleic acid tests at the Shanghai Disney Resort on Sunday night, to their surprise, fireworks planned for the Halloween celebrations illuminated the sky, making the Covid-19 test a “romantic” experience.

After being notified that a confirmed Covid case had visited the resort, Shanghai quickly responded, closing the attraction temporarily, conducting mass testing and sending people home in shuttle buses and taxis. The city reported early Monday morning that more than 33,000 people had been tested and no positive cases had been found.

The government’s response has drawn praise online, with netizens noting that the city’s ability to implement disease control measures in an orderly manner sets it apart from some other regions that have drawn criticism for their “one-size-fits-all” approach. One example being the Jiangxi province county that turned its traffic lights red to prevent people moving around.

Zhang Wenhong, director of the infectious disease department at Shanghai’s Huashan Hospital, gave a nod to the city’s “standardized handling of the epidemic” in a post on microblogging platform Weibo.

“Thanks for tonight’s undisrupted fireworks show. We are seeing humankind’s calmness and confidence in the future amidst a disaster,” he wrote.

Over the weekend, special decorations and a planned fireworks show to celebrate Halloween attracted tens of thousands of visitors to the resort.

As a parade was about to begin at 4:40 p.m. on Sunday, some visitors at the entrance of the resort were told by traffic police that entry had been suspended. About half an hour earlier, the city of Hangzhou in neighboring Zhejiang province reported a new Covid-19 case, who had visited the park on Saturday.

Shanghai Disney Resort made an official announcement at 6:15 p.m. that it had suspended entry into its theme park and commercial area.

In the park, the first fireworks show began at around 7 p.m. and later the park told visitors that they would have to take nucleic acid tests before leaving. The park kept part of its stores open to provide blankets to visitors, with staff members allowing one person to enter at a time. Some restaurants also remained open for visitors.

The city arranged shuttle buses and taxis to pick up visitors as the Disney Resort subway station was closed, and all visitors had left the park before midnight.

Local authorities also required people who had visited the Shanghai park over the weekend to self-quarantine for two days and take nucleic acid tests in the next 14 days. According to official statistics, there were some 46,000 visitors in the Shanghai park at 6:30 p.m. on Sunday, which means up to 100,000 visitors night have been to the park over the entire weekend.

The theme park operator also announced that Shanghai Disneyland and Disneytown were temporarily closed on Monday and Tuesday as part of pandemic prevention requirements.

Some visitors shared their experiences online, prompting discussion and appreciation of the handling of the incident. “You can always trust Shanghai and Disneyland,” one Weibo user wrote.

In Jiangxi, authorities in Yanshan county announced they had turned all traffic lights red to limit movement after a confirmed case was identified. And the city of Hehei in Northeast China’s Heilongjiang province changed the health app status to yellow for everyone with a Hehei household registration permit, including those were studying or working in other cities, causing inconvenience to their daily life. Yellow status requires a person to self-quarantine.

Some Beijing residents who travelled outside the city have complained about health apps showing incorrect information and leaving them stranded outside the Chinese capital. On Tuesday, the Beijing authorities noted the data errors and apologized, advising citizens to report issues to the relevant departments.