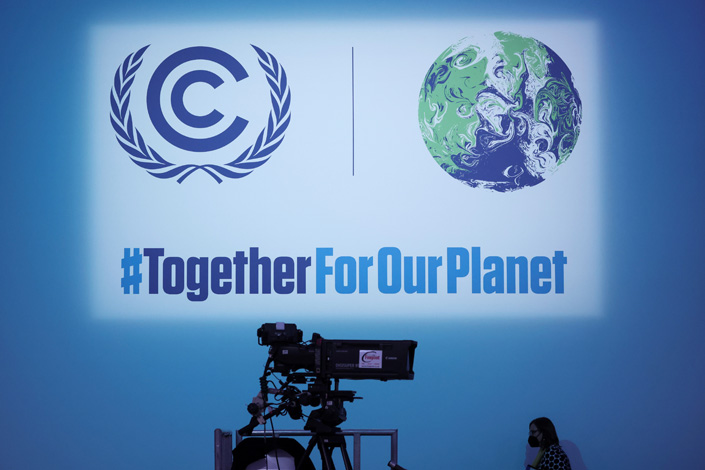 The future depends on the joint action of all humankind, especially cooperation between the world’s major powers. Photo: VCG

The two-week 26th United Nations Climate Change Conference of the Parties (COP26) of the U.N. Framework Convention on Climate Change (UNFCCC) is underway in Glasgow, the U.K. As the largest climate conference since the 2015 COP21, COP26 has attracted worldwide attention. The climate conference is fraught with difficulties in negotiations and has been shrouded in a strong sense of crisis since the opening. This is precisely where the hope of mankind lies, turning this sense of crisis into practical actions to achieve the global climate goals.

Climate change has driven mankind to form a real community with a shared future. The “Paris Agreement” reached in 2015 proposed to limit the global average temperature rise to well below 2 degrees Celsius, preferably to 1.5 C compared with pre-industrial levels. COP26, which was originally scheduled to be held in November 2020 but was postponed because of Covid-19, is the first Conference of the Parties held since the implementation of the Paris Agreement. COP26 has two main focuses: The parties should update their Nationally Determined Contributions (NDCs) and should improve the “market mechanism,” that was not agreed upon at COP25. The assistance of developed countries to developing countries has also received much attention.

A few days before the opening of the conference, the United Nations Environment Programme (UNEP) released a report showing that under current emission reduction measures, the average global temperature will rise by 2.7 C by the end of this century, far higher than the goal set by the Paris Agreement.

This would lead to catastrophic consequences. Many consider COP26 to be our last chance to prevent this, otherwise climate change and its consequences will be irreversible. However, at the G-20 Summit in Rome before COP26, the climate negotiations between the leaders of the 20 countries — which together are responsible for more than 80% of global carbon emissions — made little progress. U.K. Prime Minister and COP26 host Boris Johnson has said that the conference is very likely to end in failure. On the first day of COP26, United Nations Secretary-General António Guterres flatly denied that the climate is improving. He said that all nations’ addiction to fossil fuels must stop to “save humankind” because right now, “we are digging our own graves.”

The current sense of crisis highlights the urgency of the human response to climate change and the significance of the COP26. This can be seen as an awakening and driving force of great significance. The key is each Party’s willingness to act. COP26 still has a chance to bring about a positive change. As Johnson said, “We have to move from talk and debate and discussion to concerted, real-world action on coal, cars, cash and trees.” As the climate crisis is getting increasingly serious, more and more countries start to take practical actions. However, some countries are still hesitating. Alhough they have made promises to follow their schedules of net-zero emission, they are not willing to give their words to the medium-term goal of 2030. This needs to change. Developed countries and large carbon emitters should lead the way in battling climate change.

As the largest carbon emitter in the world, China has actively fulfilled its commitments and effectively showed its execution. On Nov. 1, President Xi Jinping pointed out in his written speech to COP26 that China expects reinforcing actions from each party to battle the challenges brought by climate change together with the rest of the world, making joint efforts to save the Earth — our one and only home. Recently, China submitted two documents to the Secretariat of the U.N. Framework Convention on Climate Change, and made its “dual-carbon goals” a formal commitment to its nationally determined contribution (NDCs). In addition, China has released the Working Guidance for Carbon Dioxide Peaking and Carbon Neutrality in Full and Faithful Implementation of the New Development Philosophy and the Action Plan for Carbon Dioxide Peaking Before 2030. It will also successively release implementation plans for key industries to form a “1+N” policy system for the two carbon goals. China’s commitment and actions not only meet the needs of its own high-quality development, but also demonstrate its sense of responsibility as a major country.

To tackle climate change and turn the sense of crisis into action requires the cooperation of all countries, especially the major carbon emitters. If they have any hesitation or bicker over historical responsibilities while taking little with no action, pointing to carbon emissions as something included in the “right of development,” we will lose our last chance. Further, climate issues cannot be used as a bargaining chip when it comes to other issues. The game between countries in dealing with climate change is reminiscent of the “prisoner’s dilemma,” but no country can afford the consequences of opportunistic actions. No country can win if the Earth’s ecosystem collapses.

In the global action on climate change, it is vital to strengthen the cooperation between China and the U.S. Together, the two countries’ carbon emissions account for more than 40% of the world’s total. Given the current status of their relations, there is a lot of doubt whether they can finally cooperate to fight climate change and find an “oasis” in the “desert” of the China-U.S. relationship. Encouragingly, a few days ago, when the heads of the two countries spoke over the phone, the Chinese side specifically pointed out that the relevant departments of the two countries could continue the dialogue to promote coordination and cooperation on climate change and other major issues. The U.S. also said that they looked forward to strengthening communication and cooperation with China on climate change and other important issues to reach a wider consensus. This hard-won consensus should be reflected at COP26.

We only have one Earth. If this sense of crisis is not translated into action, all we are left with is the crisis. It is not advisable to be too optimistic or too pessimistic about climate change. The solution to the problem depends on the joint action of all humankind, and especially the cooperation between major powers. We are keeping our hopes up for a positive COP26.