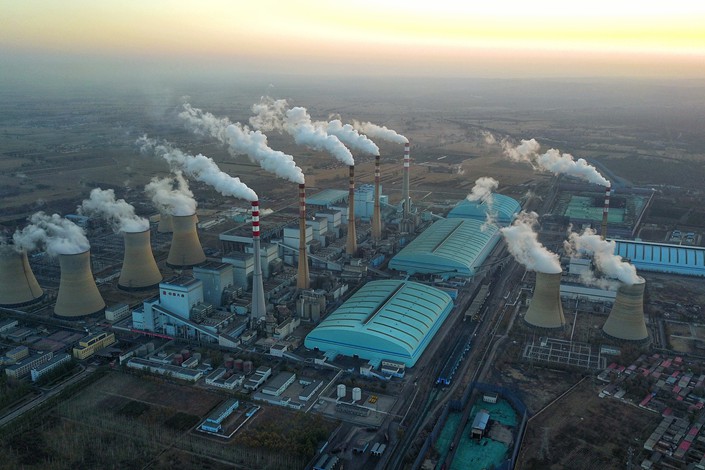 China is the world's top greenhouse gas polluter and coal is the single largest source of China's emissions. Photo: VCG

(The Straits Times) — China’s pledge to stop building coal power plants abroad could lead to a sharp drop in the number of coal plants being completed in Asia, according to a study released on Wednesday.

President Xi Jinping’s announcement in September that China would no longer build coal plants overseas could significantly limit the financing of such projects in the developing world, especially those that have yet to secure funding, said an analysis by the Centre for Research on Energy and Clean Air (Crea) and Global Energy Monitor, which tracks fossil fuel projects.

Prior to Mr Xi’s announcement, more than 65 gigawatts (GW) of coal-fired power plants were planned for construction in Asian countries outside of China and India.

If all power plants dependent on Chinese support were cancelled, it would remove two-thirds of these planned projects, leaving 22 GW remaining in just eight countries, according to the report.

And of the remaining 22 GW — totalling 28 projects — less than a third have secured finance, suggesting some of these might not be built, the authors said.

The findings come as United Nations climate talks in Glasgow are trying to agree a deal that will stabilise the world's climate. Achieving this means slashing fossil fuel emissions, especially polluting coal.

But while the findings point to a shrinking number of coal plants in most of Asia, China still has the world's largest pipeline of projects by far.

“This is in addition to 100 GW under construction. With coal-fired power generation in China expected to peak before 2030, there's a need to control new construction starts and that's what the government is vowing to do,” he told The Straits Times.

“We can therefore expect a lot of the pre-construction projects not to go ahead, but coal power capacity additions will nevertheless be large in China in the next years and increasingly out of step with the rest of the world,” he noted.

China is the world's top greenhouse gas polluter and coal is the single largest source of China's emissions. The nation is also the world's top coal consumer and producer and, while it is also the top renewable energy investor, coal remains the main energy source.

That dependency has put China squarely in the sights of the United States and poorer more vulnerable nations, who say China's climate commitments are not strong enough to prevent global warming of more than 1.5 degrees Celcius.

Keeping the world on track to limit warming to 1.5 degrees Celcius above pre-industrial levels is a key focus of the COP26 talks and climate scientists say breaching this threshold will trigger more violent storms and floods, longer droughts and accelerate sea level rise.

China has pledged that its carbon dioxide (CO2) emissions will peak before 2030, reach net zero before 2060 and that it will increase the efficiency of its coal plants.

Mr Myllyvirta said India's pre-construction pipeline was 21 GW, representing a major reduction from just a few years ago, and also showing a reduced appetite for coal.

Cancellation of the remaining 22 GW pipeline would save over $27 billion in capital costs that could be spent on renewable energy investments as well as electricity grid expansion and modernisation, they said.

It would also avoid adding approximately 103 million tonnes of CO2 emissions a year — the equivalent of Bangladesh's total CO2 emissions in 2019.

But China's pledge is not likely to affect the approximately 43 GW of coal projects already under construction in the region, the authors noted.

“Building new coal capacity is incompatible with many of the pledges made by Asian countries at the COP26 talks. It also makes little financial sense as the price of new solar and wind projects continues to drop to a point where it's cheaper than generating power from existing coal,” said Ms Isabella Suarez, energy analyst at Crea.