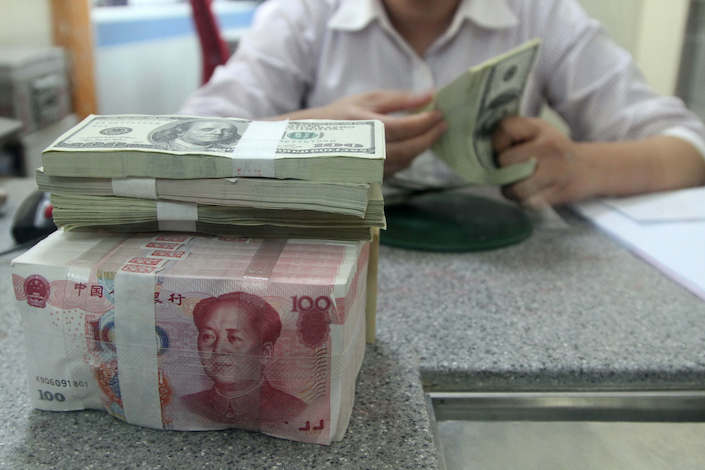 An index of the yuan against 24 other currencies has held in near-record territory for two straight weeks.

Surging exports and a wider yield spread have driven China’s yuan to its highest level in five years. Analysts say they expect the currency to continue appreciating over the long run.

The strong yuan reflects robust exports. China’s trade growth has remained well above pre-pandemic levels all year. Exports through October surpassed those for all of 2020. Shipments rose 27.1% in dollar terms last month from a year earlier to $300.2 billion. That was the 13th straight month of double-digit growth.

Adjusting for core inflation, China’s interest rates are higher while those in the U.S. are too low, making the Chinese currency’s real interest rate spread against the dollar rise sharply and providing strong support for the yuan, Xu said.

Although the dollar has been buoyed by the U.S. economic recovery and the Fed’s reduction of asset purchases, yuan-denominated assets have increasingly acted as an investment and hedging tool, said Wang Youxin, a researcher with the Institute of International Finance at the Bank of China.

There is more buying than selling in the onshore yuan market as strong exports have led to large holdings of foreign currencies at Chinese banks, according to a foreign exchange market participant at a Chinese bank. Exporters rush to exchange foreign currencies holdings into yuan whenever there is a small dip the currency’s value, providing further support for the yuan, a forex market participant at a foreign bank said.

Relatively weaker imports and a decline in overseas acquisition and investment by Chinese companies have curbed demand for foreign currencies, according to a forex market participant at a Chinese brokerage.

The CFETS RMB Index is expected to continue above 100 in the fourth quarter at least until early 2022, when seasonal fluctuation in trade and the dollar’s strength may weaken the yuan, said Xie Yaxuan, chief macro analyst at China Merchants Securities.

The growth gap between the China and U.S. economies may narrow in 2022, which may also put some pressure on the yuan, Zhong Zhengsheng, chief economist of Ping An Securities, wrote in an article.

In comparison, the U.S. economy grew at a 2% annualized pace in the third quarter, its smallest increase since the end of the 2020 recession. Economists largely say they expect the U.S. to bounce back in the fourth quarter and continue expanding into 2022. Goldman Sachs estimated 4.5% growth in the fourth quarter of 2021 and the first quarter of 2022.