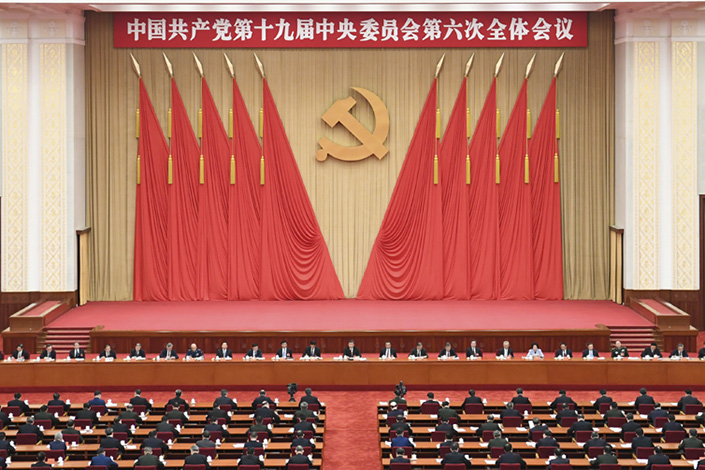 The sixth plenary session of the 19th Central Committee of the Communist Party of China began on Monday in Beijing. Photo: Xinhua

By looking at history, we can understand why powers rise and fall.

The much-anticipated Sixth Plenary Session of the 19th Central Committee of the Communist Party of China (CPC) was held in Beijing from Nov. 8 to 11. At the session, the Central Committee adopted the “Resolution on the Major Achievements and Historical Experience of the Party over the Past Century.” The resolution reviewed valuable historical experiences from 10 aspects. “The CPC is rallying and leading the Chinese people on a new journey toward realizing the second centenary goal.”

Out of these experiences, there are two especially noteworthy, namely breaking new ground and remaining committed to self-reform.

The resolution provides a review and summary of the experience over the past century. “Looking back on the Party’s endeavors over the past century, we can see why we were successful in the past and how we can continue to succeed in the future.” Beyond that, the CPC highly affirms Mao Zedong Thought, Deng Xiaoping Theory, Theory of Three Represents, Scientific Outlook on Development, and Xi Jinping Thought on Socialism with Chinese Characteristics for a New Era, which marks the historic steps in adapting Marxism to the Chinese context.

Recalling the past and comparing it with the present, the CPC has made remarkable achievements but also suffered a lot in its first century of existence. Finding the right path has been hard work. The Communiqué of the Sixth Plenary Session of the 19th CPC Central Committee reiterates, “Reform and opening up was a crucial move in making China what it is today.” Reform and opening up is the great practice of breaking new ground and remaining committed to self-reform. In the new era, it remains necessary to comprehensively deepen reform and opening up so that we can build a new development paradigm and achieve common prosperity and high-quality development.

The path of reform and opening up was found through tenacious struggle and exploration. The communiqué noted, after the Third Plenary Session of the 11th Central Committee of Communist Party of China, the Chinese Communists, mainly represented by Deng Xiaoping, thoroughly summed up the positive and negative experience since the founding of the People’s Republic of China. By focusing on the fundamental questions of what socialism is and how to build it and drawing lessons from the history of world socialism, they established Deng Xiaoping Theory and endeavored to free minds and seek truth from facts. They made a historic decision to shift the focus of the party and the country’s work onto economic development and to launch reform and opening up. Written down, the four words “positive and negative experience” may not look like much, but they have important implications. It not only embodies historical materialism and a correct view of the party’s history but also shows that the path, principles and policies for the reform and opening up drive should be unswervingly adhered to.

The reason why it is said that “reform and opening up was a crucial move in making China what it is today” is that only by advancing reform and opening up could China establish the objectives and basic framework for reform of the socialist market economy system and build a basic economic system in the primary stage of socialism in which public ownership is the mainstay and economic entities of diverse ownership develop together and a distribution system under which distribution according to work is the dominant mode and a variety of modes of distribution coexist.

Only in this way could China realize the historic transformation from a highly centralized planned economy to a dynamic socialist market economy, go from being closed and semi-closed to omnidirectionally opened, achieve a historic breakthrough from a relatively backward productive force to the second-largest economy in the world and take a historic leap going from a nation where people lacked food and clothing to a moderately prosperous society, finally becoming a moderately prosperous society in all respects. The great cause of socialism with Chinese characteristics is like a relay race, the achievements that we see today are the results of generations of determined and hard-working Chinese, who firmly promoted reform and opening-up, something that should be cherished more than ever.

Since the 18th National Congress of the CPC, socialism with Chinese characteristics has entered a new era. As stated in the Gazette, “We have solved many tough problems that were long on the agenda but never resolved and accomplished many things that were wanted but never got done.” China’s economy has developed at a steady pace. We have won the battle against poverty and built a moderately prosperous society in all respects. This series of achievements could not have been realized without the comprehensively deepened reform and opening-up policy. This is reflected in letting the market play a decisive role in resource allocation and giving better play to the role of the government, and further streamlining the administration and delegating power so border between power and the market has become clearer — confining power in the cage of law and regulation.

Each generation has its own missions. The second centenary goal is grand: basically realize socialist modernization by 2035 and develop China into a great modern socialist country that is prosperous, strong, democratic, culturally advanced, harmonious, and beautiful. A solid foundation has been laid to achieve this goal, but it is easier said than done, and there are still many hidden dangers and obstacles to overcome.

In recent years, the downward pressure of China’s economy has been mounting and the total-factor productivity rate is declining. The phenomena of containment in core technologies has become a prominent issue, revealing the urgency of constructing an innovative nation. The imbalance in regional development is a noticeable problem, reflected not only in the gap between the east and west, but also in the widening gap between the north and south. The growing gap between urban and rural areas, “semi-completed urbanization” and the great disparity in residents’ income are making the realization of common prosperity arduous. In addition, the aging population issue is serious, and the social security system urgently needs to be improved. These deep-seated contradictions are formed due to natural and historical factors and institutional shackles. Therefore, there is no end to reform and opening up, it is an everlasting project.

Comfortingly, policymakers have a clear understanding of the challenges they face. As stated in the communiqué, “With the determination to never let up until we reach our goals and with the attitude that the last leg of the journey only marks the halfway point, we must make unremitting efforts to advance the rejuvenation of the Chinese nation.” We must be conscious of the fact that China is still in the primary stage of socialism and will remain for a long time, and that China is still the largest developing country in the world, with the main social contradiction between the people’s ever-growing needs for a better life and unbalanced and inadequate development. In striking words, the communiqué reads: “one thrives in adversity and perishes in laxity, see things from a long-term, strategic perspective, and always remain mindful of potential dangers,” “we must remain modest and prudent, guard against arrogance and rashness.” Obviously, these requirements are not limited to a certain aspect but have overall significance. The communiqué requires that “we must make absolutely sure that we make no catastrophic mistakes on fundamental issues,” for which committing to deepening reform and opening up in an all-around way is an extremely important guarantee.

“We are closer, more confident, and more capable than ever before of making the goal of national rejuvenation reality.” Indeed, the Chinese people have reasons to be proud of their achievements and will undoubtedly continue to work hard and bravely move forward. The future Chinese Communists must also carry forward the spirit of pioneering and innovation and self-revolution, and hold high the banner of comprehensively deepening reform and opening up.