Electric Semi-Trailers Are Next Step in Greening China’s Roads 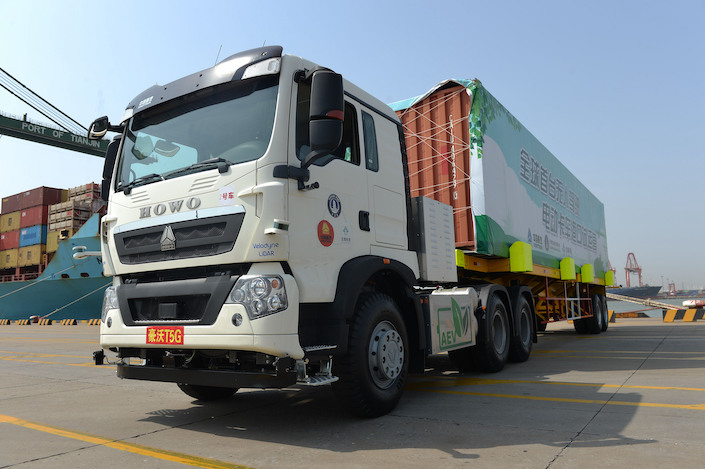 (Bloomberg) — The battle for supremacy in electric vehicles started in the passenger car segment, with hundreds of companies in China fighting for individual buyers’ attention. Now, it’s truck makers’ turn to wave goodbye to gasoline and diesel power.

China, the world’s biggest market for EVs, also has clear green-trucking potential. The China freight transportation market is worth almost $860 billion, the largest globally, according to McKinsey. As of September, there were 32 million semi-trailers plying the nation’s roads and highways, hauling cargo across a land mass almost the size of Canada. Considering China’s rapid economic development and the rise of e-commerce, demand for trucks — particularly heavy duty ones — has been soaring.

Trucks are big polluters, and they guzzle a lot of fossil fuel. The carbon emissions of one diesel-powered truck equal those of about 306 passenger cars. Efforts to slow climate change rely heavily on reducing emissions of carbon dioxide, the most important greenhouse gas.

As the Chinese government works toward carbon neutrality, making trucks and buses greener is an important step. Over the past few years, authorities have been tightening emissions standards to squeeze out rigs that don’t meet the bar — an incentive for manufacturers to electrify.

In mid-October, SAIC kicked off construction of a facility in Inner Mongolia to make 10,000 hydrogen semi-trailers annually. Two weeks earlier, FAW said it would have 20% of its truck lineup powered by new energy by 2025, rising to 70% by 2035, while Geely, which has also invested in Volvo Truck and Daimler’s truck business, made a splash last week with its futuristic smart truck, which comes with a single bed, shower and toilet, refrigerator, mini kitchen, and even a small washing machine to make drivers feel at home on the road.

As well as being environmentally friendly, the Homtruck, which can be charged at service stations along highways in minutes and also uses methanol, has other high-tech features like 360-degree cameras to help keep drivers alert and hands-off autonomous drive functions for some routes. According to Geely Commercial Vehicles Group CEO Mike Fan, the cost per unit won’t be significantly higher than fossil-fuel rigs by the time the vehicles arrive in early 2024.

Fan also said competition in the commercial vehicle market isn’t as stiff as for passenger EVs. Heavy-duty trucks are typically replaced after 1 million kilometers, or around five years.