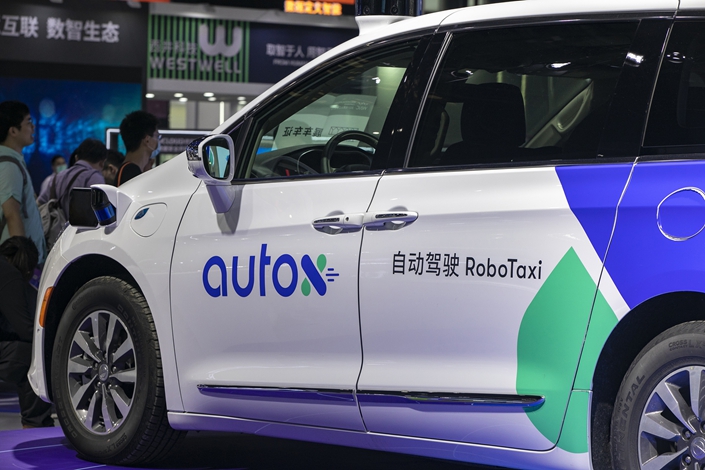 A robotaxi sits on display at the World Artificial Intelligence Conference in Shanghai on July 9. Photo: VCG

AutoX said on Tuesday that its driverless robotaxi pilot service that launched in January will now operate across Shenzhen’s entire Pingshan district, an area of 168 square kilometers (64.8 square miles), in a move that differentiates it from rivals that use semi-closed areas like industrial parks.

In tandem with the announcement, the Alibaba-backed startup released a video on social media to illustrate how its robotaxi navigates other cars and intersections, avoids barricades and responds to traffic lights for 10 minutes, all without human intervention.

Zhejiang Yongtai Technology Co. Ltd. said in a Monday exchange filing (link in Chinese) that Tesla battery supplier Contemporary Amperex Technology Co. Ltd. (CATL) plans to buy a 25% stake in Yongtai’s lithium-producing subsidiary from a shareholder for 500 million yuan ($78.4 million). Yongtai agreed to waive its preemption right for the stake, and said that the deal will deepen its cooperation with customers in the lithium battery business.

Temasek is taking a more cautious stance in the area of Chinese “internet platforms, where we will probably wait for regulatory clarity before we can deploy much more capital,” Chief Investment Strategist Rohit Sipahimalani said in a statement which sought to deny a Nikkei Asia report Monday that said it was scotching broader investment in Chinese tech.

The statement came in the form of Temasek’s transcript of the Nikkei Asia interview, in which Sipahimalani said the firm would continue to invest in areas such as Chinese medtech and biotech, electric vehicles and renewable energy.

“The Chinese government wants to address things like monopoly power of internet platforms… data privacy… [and] income inequality,” Sipahimalani said, predicting that regulatory clarity would come in the next few months, which will “shape some winners and losers out there.”

“In China the way that is being executed is a little more blunt and quick, and that is why it has created a lot of shocks out there,” Sipahimalani said, according to the Temasek transcript.

Citing the investor’s July performance report, Nikkei Asia’s Monday report said Temasek’s exposure to China by underlying assets dropped by 2 percentage points to 27% of its total, while Singapore’s share remained unchanged at 24%. Temasek is a backer of Alibaba, Tencent and Didi Chuxing, all of which are in the Chinese regulators’ crosshairs.

Chinese internet stalwart Sohu.com Ltd., which has been outshone by much younger peers in recent years, became profitable in the third quarter of 2021, largely helped by strong growth in its online gaming business.

In the three months through September, the Beijing-based company logged a non-GAAP net profit of $17 million, compared with a net loss of $7 million in the same period of last year, according to its earnings report released on Monday.

The reversal came as the company’s total revenue grew 37% year-on-year to $216 million, nearly 77% of which came from its online gaming business that generated revenue of $167 million, up 65% year-on-year, according to the report. Another major revenue source is the advertising business, which generated $34 million, down 18% year-on-year.

SMIC reports growth in both revenue and profit amid semiconductor crunch

The Shanghai-based company also raked in $321.4 million in profit in the third quarter, up 25.3% year-on-year, according to its earnings report released last week.

The report was released the day before SMIC announced the resignation of Vice Chairman Chiang Shang-Yi in a second management change at the company in two months. In September, the chipmaker’s Chairman Zhou Zixue left SMIC, citing health reasons.

Cyclone Robotics, a Chinese startup that develops robotic process automation (RPA) systems, said on Monday that it has raised $150 million in a series C funding round co-led by CMC Capital and Goldman Sachs Asset Management.

Net proceeds will be used to boost its R&D capabilities and accelerate its efforts to serve more small and midsize corporate clients, the Shanghai-based firm said in a statement (link in Chinese).

The partnership came as TME has relinquished all its exclusive music licensing deals to meet a government order aimed at curbing monopoly in the music streaming sector.

Missfresh Ltd. and Dingdong Maicai, the two Chinese online grocery platforms that went public in the U.S. this summer, both suffered widening losses in the third quarter of 2021 even as their revenues grew.

In the three months through September, Missfresh’s net loss attributable to ordinary shareholders swelled to 973.7 million yuan ($151.1 million) from 616.2 million yuan a year ago, while its revenue rose 47.2% year-on-year to 2.1 billion yuan, according to its earnings report released last week.

Its rival Dingdong also reported a net loss attributable to ordinary shareholders of 2 billion yuan in the third quarter, compared with a 917.6 million yuan loss in the same period of last year, even as its revenue more than doubled to 6.2 billion yuan, according to its financial report published on Monday.

The widening losses came as operating expenses at Missfresh and Dingdong increased 70% and 117% year-on-year, respectively, to the tune of 1.2 billion yuan and 8.2 billion yuan, according to their earnings reports.

The two companies said they will increase the shares of self-run brands on their platforms and improve their supply chains in the future in order to increase gross margin, a key indicator of profit-earning ability.

This story has been updated to reflect Temasek’s denial that it is ceasing China tech investment. In a Tuesday statement, Temasek said it was only ceasing investment in Chinese internet platforms.

This Caixin Tech Insider was compiled by Ding Yi (yiding@caixin.com) and edited by Heather Mowbray (heathermowbray@caixin.com). Send us your tips and feedback.