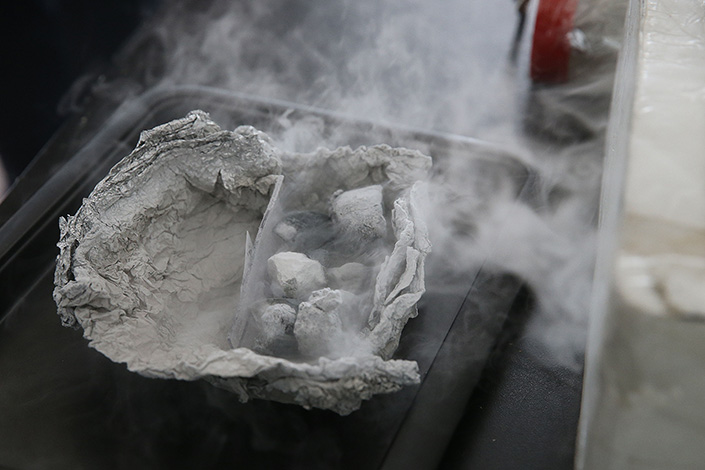 Methane hydrate that was extracted from the South China Sea in 2017. Photo: VCG

(Oxford Analytica) — Japan’s Mitsui Holdings is making progress in its efforts to commercialize extraction of methane hydrates from below the seabed, which could unlock a vast source of potential hydrogen production. If successful, it could provide a fillip for Japan’s drive to decarbonize its economy and for Japanese auto manufacturers’ efforts to develop an alternative to battery-powered electric vehicles. Given the extent of methane hydrate deposits globally, success in Japan could have implications far and wide.

Tokyo places a high priority on boosting its energy independence. If extraction can be made safe and cost-effective, methane hydrate could provide Japan with a strong hydrogen element to its energy transition, with implications for electricity generation and automotive manufacturing. India, which like Japan is today highly reliant on fossil fuels to generate electricity, could be an early beneficiary of proven extraction technology.

• China reported successful extraction of methane hydrate gas in the South China Sea and may increase its exploration efforts.

• The crisis in natural gas markets could slow down hydrogen development unless alternative sources, such as methane hydrate, are developed.

• Europe’s efforts will rise; German scientists are studying the stability of methane hydrate deposits in western parts of the Black Sea.

Methane hydrate is a solid compound in which a large amount of methane gas molecules are caged within a crystalline structure of water. The material starts burning when an open flame is brought close to it.

Under stable conditions of low temperature and high pressure, the compound forms a solid, similar to ice. Such conditions are found within organic-rich sediments of deep-sea regions such as the continental slope of the Gulf of Mexico and atop mud-volcanoes of the Caspian Sea. Eastern Nankai Trough near Japan’s south-eastern coast is believed to host 566 billion cubic meters of methane hydrate gas. If converted into natural gas, it would amount to resources four times larger than Qatar’s conventional deposits, potentially covering Japan’s energy needs for 100 years.

The traditional way to extract methane hydrate is by drilling deep into the seabed. A pilot was established in March 2013. At depths of 1,000 meters below the surface of the ocean, 300-metre deep wells were drilled into seabed sands. However, the high pressures involved make the process so complex that it is not yet commercially viable.

Modec, a subsidiary of Mitsui Engineering & Shipbuilding, a maker of offshore oil platforms, possesses the know-how to retrieve oil and natural gas efficiently using the natural upward pressure of the deposits. Since methane hydrate becomes steadily more gasified when it reaches the ocean surface, Modec can apply its alternative extraction technology to extract it from sedimentary deposits. The equipment consists of a novel floating unit that is positioned to pierce the reservoir and release some of the underground pressure. The liberated heat is then captured by offshore vessels, compressed and transported on other ships onshore. The “fire ice” is broken down and lifted into the floating gasification unit, where it is converted into methane gas and transported to an onshore terminal through an underwater pipeline.

Modec has already developed a prototype extraction unit. In September the company announced a collaboration with Hokkaido’s Kitami Institute of Technology to launch an onshore test, extracting two-meter by three-meter ice bars that resemble methane hydrate. Success would inform the design of drilling equipment.

Separately, Mitsubishi Shipbuilding, a unit of Mitsubishi Heavy Industries, is developing a methane hydrate floating unit based on its offshore mining technology. Both Mitsubishi and Mitsui are targeting this new business after their shipbuilding and offshore platform businesses were severely hampered by the drop in energy demand amid the pandemic shock in the first half of 2020.

Since the methane hydrate is lifted under strong pressure, the process requires high precision. Just several grains of sand penetrating into a borehole would make the energy source unusable. Other risks include major explosions. BP’s Deepwater Horizon disaster in 2010 may have owed some of its explosive intensity to methane hydrate.

Environmentalists also point out the risk of releasing methane into the atmosphere. The compound is 25 times more emissions-rich than CO2.

When burned, methane hydrate emits 30% less CO2 than coal or oil. To deal with the remaining 70%, a plan has been designed to inject the spent fuel back into the former reservoirs of methane hydrate, under the sea floor. A successful pilot project began in 2017 and focused on Nankai Rift, southeast of Honshu, Shikoku, and Kyushu. The project aligns with the Japanese government’s stated goal of attaining net-zero emissions of greenhouse gases by 2050. A stable source of hydrogen would play a pivotal role in achieving this.

The main goal is not to burn methane but to produce hydrogen. One cubic meter of methane hydrate can produce roughly 160 cubic meters of methane gas, which, in turn, can be transformed into hydrogen. For Japan, which relies on fossil fuels for 90% of its electricity generation, accessing affordable hydrogen in large volumes is a longstanding strategic objective. Currently, most hydrogen is derived from natural gas, which Japan imports in liquefied form (LNG). By 2050, Japan plans to increase its hydrogen use to 20 million tons per year. For this to happen, the cost of hydrogen production must fall from JPY100 (USD0.88) per kilogram to JPY20 per kilogram, levels at which it would become competitive with imported LNG as a feedstock for power plants.

Hydrogen could be one way to protect Japan’s auto industry from upheaval. In general, Japan’s established automotive manufacturers have an incentive to promote fuel cell vehicles (FCEVs) over battery electric vehicles (BEVs) for two reasons:

• In the BEV value chain, most of the value generation falls into the hands of auto-parts companies, in particular battery makers, where South Korea and China currently dominate.

There are over 30,000 units of auto parts in ICE vehicles and most traditional auto makers produce their powertrains in-house. The time and cost involved in powertrain engineering has traditionally been considered the highest entry barrier for potential competitors. However, in BEVs, the number of parts is reduced to 10,000 units, and the key components are provided not by the manufacturers but by auto-parts suppliers (for example battery pack manufacturers or chipmakers). FCEVs, on the other hand, require 20,000-30,000 parts, and the stack, one of the key parts as it generates the electricity to power the FCEV, will remain under OEMs’ control, suggesting that they will likely maintain their leverage over market dynamics.

Once the technology has been vetted, Modec aims to commercialize its equipment. An order for one floating unit is expected to fetch tens of billions of yen in revenue.

India is one potential client. The strengthening geopolitical partnership between Japan and India could utilize advanced Japanese technology to unlock the resource in Indian Ocean.

The sedimentary basins adjoining the west coast of India include Kutch basin, Cambay basin, Saurashtra, Surat and Bombay basins, as well as Konkan and Kerala basins. The last two, located further south, are considered the most promising.