By Bao Zhiming and Guo Yingzhe 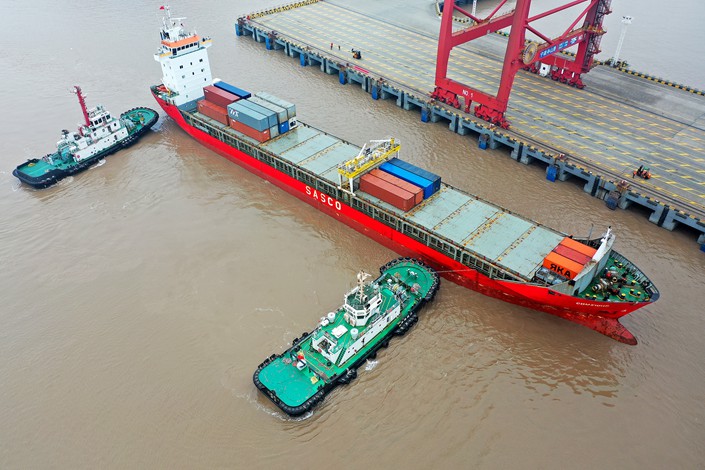 China is opening its coastal shipping market to international capital for the first time after the government green-lit a trial to allow qualified foreign firms to transport foreign-trade cargo containers between certain domestic ports.

The State Council, China’s cabinet, announced (link in Chinese) on Thursday that it had approved a proposal to launch a three-year pilot program for the Lingang district of China (Shanghai) Pilot Free Trade Zone.

The move is said to mark the first time the People’s Republic of China has given foreign capital access to coastal shipping between domestic ports. Firms outside the Chinese mainland have long been banned from shipping goods between mainland ports, and from chartering Chinese vessels or slots.

In the pilot program, qualified firms from overseas, as well as from Hong Kong and Macao, will be permitted to ship foreign-trade containers between Yangshan port in Shanghai and ports in Dalian, Tianjin and Qingdao via the foreign-flagged vessels they own. The Yangshan port will be the international transfer port in the program.

The inherent national security implications of coastal shipping have led many nations around the world to grant exclusive operations to domestic vessels for cargo transport between domestic ports. In the U.S., the Jones Act, which regulates shipping, requires vessels that ship goods between domestic ports to built, owned and operated by U.S. citizens or permanent residents.

South Korea, Japan, Brazil, Russia, Australia and Canada are among the other nations that ban the shipping of goods domestically by foreign operators, according to the OECD.

Foreign companies have called on China to open up its coastal shipping business since it joined the WTO in 2001. China is the world’s largest exporter of goods and all major global container shipping companies have foreign trade transportation business off Chinese coasts.

But as local firms brace for competition, industry insiders are concerned that the opening up will be a shock to their businesses. The move will inevitably have an impact on local shipping enterprises, one executive of a Chinese shipping company said.

The executive, who asked not to be named, said the principle of reciprocity should apply, and Chinese authorities should only give access to firms in countries or regions that open coastal shipping business to Chinese companies. “Neither Japan nor South Korea grant access to their coastal shipping to China, and opening up hastily will bring about losses for us, so I hope the government will weigh up benefits and costs.”

Zhang Wenguang, a researcher at state-backed think tank Chinese Academy of Social Sciences, said a benefit of the program is that many container shipment operations at foreign ports such as Singapore would likely go back to Shanghai, thus increasing the port’s revenue. For goods’ owners, the opening-up will allow them to have more choices, he said.

But Zhang warned that many domestic shipping companies’ could be jeopardized by a sweeping change, as they tend to be smaller than their international peers. He said since the program only allows “qualified” foreign companies to have access, the Ministry of Transport and the Shanghai municipal government should clarify the rules and the qualifications.