From Stravinsky to Tan Dun, an Everlasting Musical Dialogue Between East and West 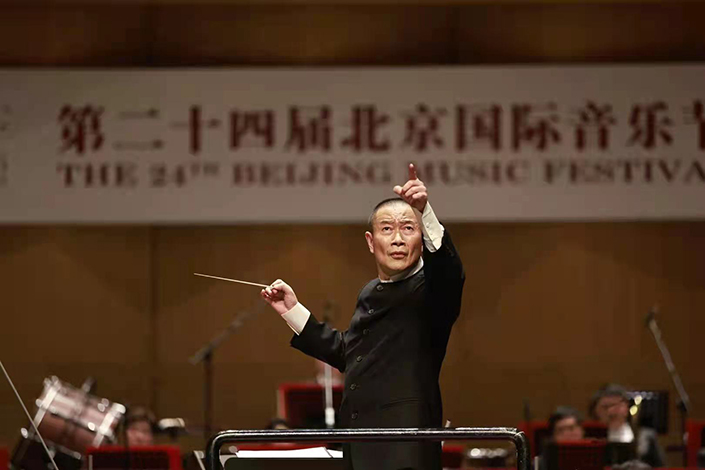 Music has always been an effective channel for cross-cultural dialogue. A recent concert in Beijing staged a unique communication between the works of Stravinsky and one of China’s most famous composers, Tan Dun.

On the evening of October 24 at the Poly Theatre in the capital, a special concert entitled “Tan Dun Conducts the China Philharmonic Orchestra in Conversation with Stravinsky” was held as the closing event of the 24th Beijing Music Festival. This was indeed a very unique form of reciprocal reflection on music by Igor Stravinsky (1882-1971) and Tan Dun, a world-renowned contemporary composer who produced the score for the movie “Crouching Tiger, Hidden Dragon.”

The concert was designed in the context of commemorating the passing of the old and longing for the new. By looking at the evening’s program, as well as the soloists and orchestration, it was obvious the purpose was to present a “conversation between classics, and between classical and modern, and furthermore, between East and West,” said Tan Dun, in an introduction of his musical works to the audience.

The astonishing outcome of the one-and-a-half hour concert was the transportation of the audience on a wonderful journey through time: from 400 A.D. with music depicted in Dunhuang’s marvelous grottos and murals, an important hub along the ancient Silk Road where West meets East for the first time; to the early 20th century when artists such as Picasso, Stravinsky and Martha Graham, inspired by eastern culture and arts, all deviated from tradition in seeking new and modern expression in painting, music and dance; and to the 1960’s and right up to today.

Obviously, the world has changed a lot with the opening-up of markets, advances in technology and economic globalization. Amid all that, cultural and artistic exchanges that are broadly inclusive and diverse are still needed to ensure that we have trust and unity, rather than division.

The concert started with Stravinsky’s “Fireworks,” a piece he wrote in 1909 for the wedding of the daughter of his teacher and mentor Nicholai Rimsky–Korsakov. It was actually done in form of a scherzo, but was labeled as an orchestral fantasy.

The piece was followed by Tan Dun’s “The Erhu Concerto Fire Ritual,” a new work commissioned by the festival. Prior to this was his erhu concerto from “Crouching Tiger, Hidden Dragon,” using the traditional two-stringed Chinese musical instrument, which was also used in his orchestral works in “Hero,” and “The Banquet.”

Many musicians including Yehudi Menuhin, Isaac Stein and other violin masters, were amazed by the sounds and color of the erhu. Tan Dun composed an erhu and violin concerto “Fire Ritual” in 2018 in collaboration with Norwegian violinist Eldbjørg Hemsing and premiered it with the Oslo Philharmonic Orchestra. According to Hemsing, Tan Dun asked her to try the erhu to understand the sound and colors of this ancient Chinese instrument. She said in an interview later that, “You play the erhu almost like a cello and the sound is really particular: it has a distinct way of singing the notes.”

“The erhu really surprised me,” she said. “It took me some time to find the way of playing it so that it doesn’t sound too staccato or too learned. It has to sound organic and fluid. It’s extremely interesting to see how those same techniques worked on a Western violin; that is a very inspiring thing to explore.”

Different from the violin concerto, the erhu concerto “Fire Ritual” featuring young and talented soloist Lu Yiewen brought home the typical characteristics of the erhu, astonishing the audience with more melodic parts of the work with the most beautiful, lyrical, tender tones one can get out of the instrument. This contrasted sharply with the vibrant and extremely agile first part of the concerto.

The conversation between Stravinsky and Tan Dun in the second half of the concert saw Tan Dun’s “Pipa and Guzheng Double Concerto” using several traditional Chinese musical instruments including the pipa (琵琶), imported from central Asia along with the huqin （胡琴） and yang qin （扬琴） thousands of years ago. Also used was the guzheng （古筝）, which is believed to have an even longer history and was originally from China.

The evening concluded with Igor Stravinsky’s “Firebird,” a work commissioned by Serge Diaghilev subsequent to his hearing a performance of “Fireworks.”

East meets West in the arts

The journey of exchanges between musicians from East and West has stretched across time, with the most recent history beginning in the early 1960s. Credit goes to the arts and music institutions such as the New York Philharmonic and London Philharmonic orchestras, both of which have over a hundred years of history. Also, music lovers should be thankful to individuals such as Leonard Bernstein, Yehudi Menuhin, Issac Stern, and Zubin Mehta who were all pivotal in bringing Indian sitar soloist Ravi Shankar, and Japanese composer Take Mitsutoru to the US and European symphony orchestras.

In the 1980’s Isaac Stein and his management company International Creative Management Company (ICM) and its founder, Lee Lamont, paved the way for Asian musicians such as Yoyo Ma, Tan Dun, Lin Zhaoliang, Li Jian, Wang Jian, Chen Zuohuang, and Ravi Shankar’s daughter Anushka Shankar to arrange concerts across US and other places around the world.

As early as 1998, Yoyo Ma founded the “Silk Road Orchestra” and created the “Silk Road” music, arts and humanities education project with the Harvard University School of Education, continuing to contribute to this everlasting dialogue between the East and West. Tan Dun along with Zhou Long, Chen Yi, and Bright Sheng among other composers from China have had their works commissioned by opera houses, symphony orchestras, and ensembles across China, the US and Europe. Tan Dun himself became an Oscar and Grammy award winner for his achievements in music.

Returning to the closing ceremony of the 24th Beijing Music Festival, where the east-and-west music dialogue was beautifully executed, it is not difficult to see the progress that BMF has made since its founding 24 years ago. Under the leadership of Yu Long, the Chinese Philharmonic artistic director/chief conductor and former arts director of BMF, it has achieved tremendous progress over the past 20 years and has invited thousands of top composers, conductors, instrumentalists, and opera singers to perform. It has also commissioned many symphonies, operas and other works. Starting in 2018, Long Yu has boldly brought in new talent and delegated the responsibility of the festival’s artistic director to the young and promising Zou Shuang.

Zou Shuang, who came from a musical family, studied in the U.K. and is a cross-border director and multimedia image designer. She has extensive experience in music, opera, theater, and film. She said this year’s Beijing Music Festival was aimed at “commemorating masters and celebrating the new.” A common challenge all over the world is how to attract a young audience to the concerts. “We have a contemporary feel and a versatile representation of evolution and transformation of music so that young people will enjoy what they see,” she said in an interview.

In music, when East meets West, or when the classics can meet the contemporary, interesting artistic dialogues occur. To continue this dialogue, we need support from governments, institutions, musicians, and more importantly, audiences. This conversation can inspire generations, and in turn, its existence depends on efforts from across the generations.