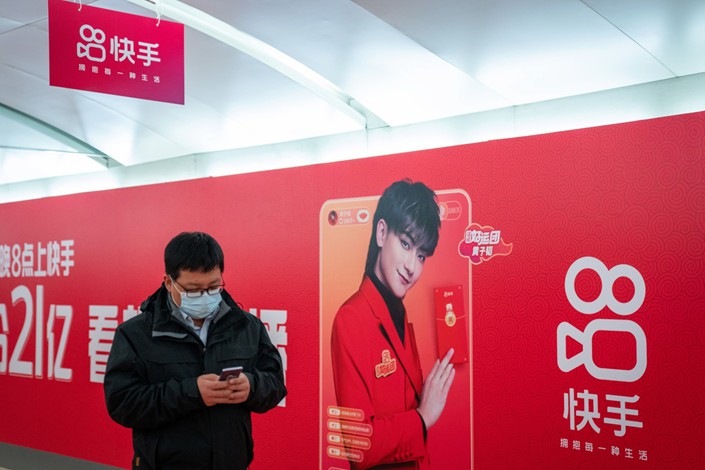 A man walks past Kuaishou Technology advertisements at a Beijing subway station in Feb. Photo: Bloomberg

Its shares rose their most in almost three months on Wednesday in Hong Kong. But the gain recoups only a portion of the losses incurred in past months as investors fretted about fallout from Beijing’s clampdown on live-streaming and internet platforms as well as a sharply decelerating Chinese economy. While its latest results showed Kuaishou was growing users and keeping a lid on costs, the market remains wary about further regulatory action and its position against TikTok parent ByteDance.

One of the worst performers among large listings in 2021, Kuaishou had shed roughly $170 billion of market value since peaking just days after a $5.4 billion February initial public offering in Hong Kong.

Kuaishou, the operator of China’s largest short-video platform after ByteDance’s Douyin, is trying to compete with the TikTok owner in both domestic and global markets. It’s also grappling with an influx of social media rivals including Tencent Holdings Ltd.’s WeChat. Beijing’s broad regulatory scrutiny over industries from education to insurance and real estate is weakening prospects for its burgeoning online advertising business.

Uncertainty is mounting as its long-time leader retreats from the public spotlight. In a surprise move announced last month, Su stepped down as the company’s chief executive officer, handing leadership to co-founder Cheng Yixiao to focus on long-term strategy as chairman. The move coincided with a flurry of management shuffles at China’s largest internet firms including ByteDance and e-commerce operator JD.com Inc., as the tech crackdown cows the country’s billionaires into submission.

Livestreaming revenue shrank at a slower pace in the September quarter, falling roughly 3% after a 14% decline in the June quarter, while online marketing services climbed a better-than-expected 76.5%, driven by traffic growth and an increasing number of advertisers. Growth in other services — the business line that includes e-commerce — cooled to 53% in the September quarter, after more than tripling in the previous three months.

Kuaishou on Tuesday reported monthly users rebounded to nearly 573 million on its main app, though it didn’t disclose the latest figures for its overseas users. The company in August shut down its Zynn video app, ending a year-long attempt to challenge TikTok in the U.S. In June, its global products including Kwai and Snack Video chalked up 180 million monthly users outside China, up from 150 million in April.

Longer-term, Kuaishou is aggressively pursuing new content in areas spanning from sports to music and variety shows. It nabbed the rights to broadcast the 2022 Winter Olympics and produce short-video content for NBA China. And just like Douyin and TikTok, the video-sharing community is morphing into an online bazaar where influencers peddle lipsticks and smartphones to their followers — the division that includes e-commerce now contributes roughly 10% of total sales.