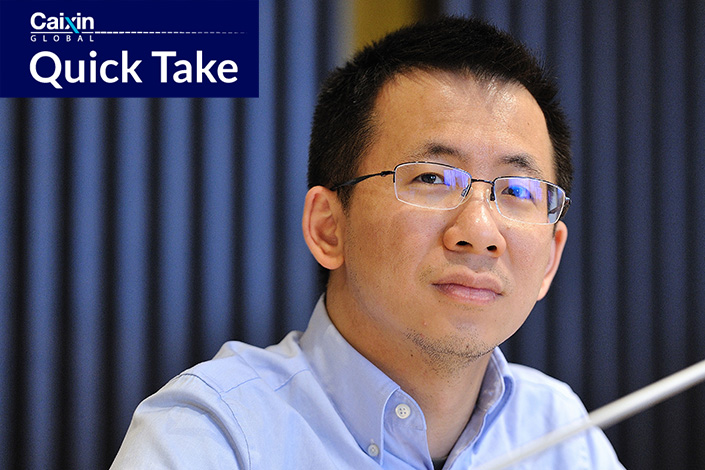 What’s new: ByteDance Ltd. co-founder and chairman Zhang Yiming has relinquished his board seat at the company six months after he said he was stepping down as CEO to focus on the firm's long-term strategy, Caixin has learned.

Company sources said that Liang Rubo, who replaced Zhang as ByteDance CEO in May, has taken over as chairman of the five-person board. ByteDance would not confirm whether Zhang still has an official role at the company.

The Beijing-based tech company this week embarked on a major organizational reshuffle to create six business units that focus on TikTok, its sister app Douyin, a line of education products, a gaming subsidiary and two enterprise service divisions.

That reshuffle includes the departure of Shouzi Chew as chief financial officer after just eight months in the role. Chew will remain CEO of TikTok, which has faced a backlash in some overseas markets due to security and privacy concerns.

The background: Zhang is the latest Chinese tech entrepreneur to step down from a senior role as the nation’s regulatory crackdown continues to roil the sector.

Last week, Su Hua, co-founder of ByteDance’s rival Kuaishou Technology Co. Ltd., stepped down as CEO to focus on long-term strategy, while staying on as chairman of the board, a move that came as the company battled widening losses and shrinking market value.

In September, JD.com Inc. said that its founder Richard Liu was stepping back from day-to-day operations to focus on formulating the company’s long-term strategy, mentoring younger managers and contributing to the revitalization of China’s rural areas.