By Sun Yanran and Manyun Zou 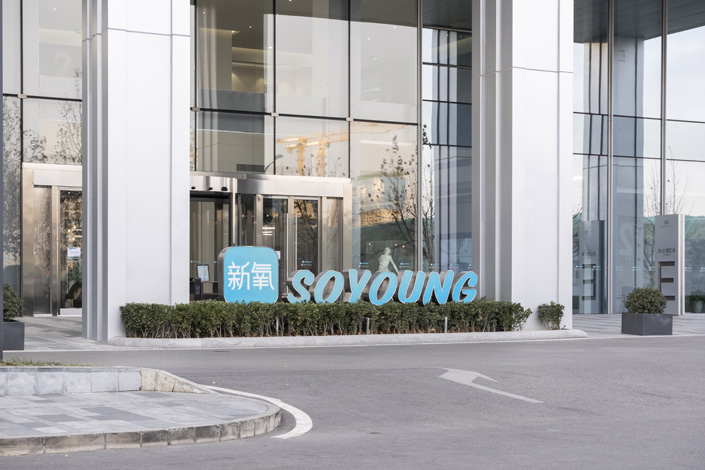 Shares of So-Young International Inc., China’s leading online cosmetic surgery services platform, tumbled on Tuesday, giving up most of the previous day’s 12% gain which came on the back of news its co-founder was seeking to take the firm private.

Nasdaq-listed So-Young closed down 11% at $4.31 per share, one day after the firm announced CEO and Chairman Jin Xing had offered to buy the firm out for $5.3 per American Depositary Share (ADS) in cash.

The price represents a premium of approximately 22.7% to the company's ADS closing price on Nov. 19 and 21.8% to the average price during the last 30 trading days. Jin owns a 16.4% stake of the firm, but controls about 84.3% of its aggregate voting power.

Three independent directors have formed a special committee to consider the offer, So-Young said in the statement.

A broker who is familiar with the issue told Caixin that So-Young might seek a listing on Shanghai's STAR Market in the future because “the Chinese mainland market gives listed medical cosmetic companies high valuations.” Caixin contacted So-Young for a comment, but has yet to receive a reply.

So-Young, which operates a social and e-commerce network focused on providing services for the plastic surgery sector, was the first such Chinese platform to go public in May 2019.

In face of the regulatory headwinds for the cosmetic surgery industry that have seen the government launch a series of crackdowns on illegal practices, the company has seen its shares plummet more than 60% this year.

In October, China’s market watchdog said it has fined beauty clinics 3.55 million yuan for a variety of dishonest or dangerous practices in the first nine months of 2021 and published 10 examples of such cases. So-Young was also mentioned in the notice (link in Chinese) because two of the named clinics used the online platform to advertise themselves.

This was preceded in June by the National Internet Finance Association issuing a notice (link in Chinese) barring financial institutions from working with illegal medical cosmetology organizations, followed by the National Health Commission and seven other government agencies publishing a plan (link in Chinese) to crack down on illegal medical cosmetic services.

In August, the country's market watchdog circulated for public consultation a policy guideline (link in Chinese) that would categorize beauty advertising as a type of medical advertising. Under the plan, those posting such ads would be required to first obtain a special license — previously reserved for medical institutions.

For the nine months through September, So-Young posted a net income attributed to the parent company of 19.4 million yuan, compared to a net loss of 32.8 million yuan last year in the same period. Its revenue also surged 61% year-on-year to 1 billion yuan, reads its latest-released financial statement.