Trending in China: Online Fury Ignited After Woman Miscarried While Forced to Wait Outside Hospital 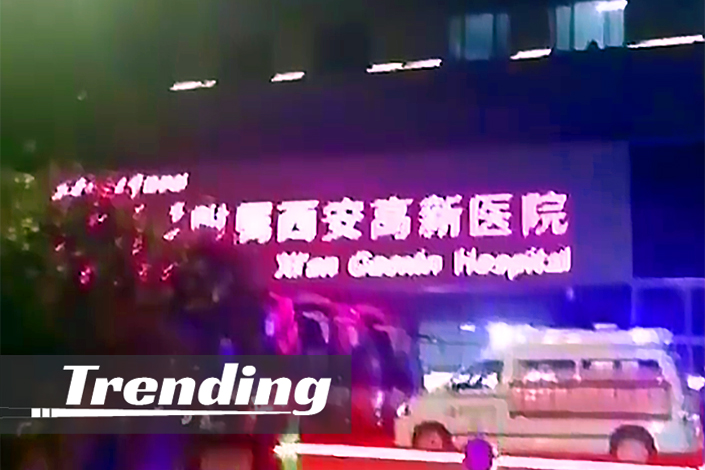 An eight-month pregnant woman had a miscarriage Saturday night after not being admitted fast enough to her local hospital in the northwestern city of Xi’an, in lockdown due to the latest Covid-19 outbreak.

The hospital said the woman failed to be admitted because her most recent negative Covid-19 test result had expired four hours earlier. Such tests generally have a validity period of 48 hours in hospitals and other public venues.

On Tuesday evening, a woman wrote in a Weibo post that her aunt suffered abdominal pains at around 7 p.m. on Saturday and was sent to a local private hospital an hour later with the help of police after the ambulance service failed to respond to her call.

“My aunt was denied entry to the hospital and … had to wait outside the hospital for two hours until she was tested negative,” the poster wrote, saying “the fetus died due to the delay in treatment.”

The attached video, since deleted, that appeared to show the woman bleeding while seated on a plastic chair during the wait, circulated quickly and drew widespread criticism.

Xi’an Gaoxin Hospital responded on Wednesday that the woman was recovering from surgery, and the provincial health commission was investigating the incident.

The hospital made a comment again on Wednesday saying “we have done everything we could do, and several departments are now investigating the incident.”

On the afternoon of Wednesday, local authorities announced at a press briefing that diagnosis and treatment of patients with acute and critical illness and pregnant women must be provided.

“It is an accident that was caused by negligence,” said a statement posted on the official WeChat account of the Xi’an Internet and Information Office on Thursday.

The hospital was required to make a public apology, communicate with the patient and deal with her post-operative rehabilitation and compensation.

Fan Yuhui, general manager of Xi’an Gaoxin Hospital, has been suspended and heads of the outpatient and medical departments connected to the case have also been removed from their positions.

This matter sparked furious indignation and outcry online. “The hospital should not let an eight-month pregnant woman sit outside for two hours, no matter for what reasons,” a user wrote on Weibo.

“How ironic! She had a miscarriage at the gate of a hospital,” another Weibo user said.

People’s Daily, a state-run newspaper, wrote in a social media post on Wednesday that it’s necessary to adjust plans according to the epidemic situation and rapidly fill loopholes and shortcomings to minimize the impact of epidemic prevention on daily life.