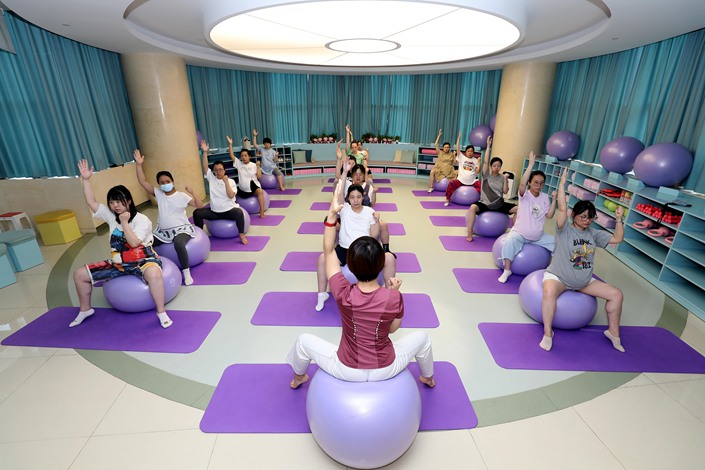 Having children is very much an economic decision with hard choices involved, particularly for women. Research has shown that women’s chances of gaining employment after bearing their first child fall by 6.6%, and by another 9.3% after the second child. The government believes that an extended maternity leave policy will aid women and increase the nation’s fertility rate, but the reality may be different.

After 40 years of reform and opening up and decades of one-child policy, China’s population growth rate has slowed, and the country is now an aging society.

Last May, China’s National Bureau of Statistics released the country’s seventh national population census showing that China’s population stood at 1.41 billion people as of Nov. 1, 2020. Compared to the figures of the 2010 census, China’s population has increased by 72.06 million, or 5.38%, which means an average annual growth rate of 0.53%. This is a 0.04 percentage point drop from the growth rate a decade ago and the first such drop since 1949. Evidently, in the years since 2017, China’s birth rate has seen a marked decline.

The latest population census figures also highlight some structural problems. With a shrinking workforce, fewer women of childbearing age, accelerating population aging, and declining total fertility rate (TFR), an aging society has become China’s fundamental reality. This will not only affect the country’s economic growth but bring heavy burdens in terms of caring for the elderly.

It is precisely due to such demographic changes that the National People’s Congress amended the Population and Family Planning Law and implemented the three-child policy. Soon after, Chinese provinces introduced various policies encouraging people to have more children, with the extension of maternity leave drawing most attention.

Based on existing laws, the statutory maternity leave is 98 days in China. Many provinces have used this baseline in extending the maternity leave duration. The provinces of Henan and Hainan, for instance, extended the existing 98 days by three months. Other provinces followed suit to varying extents, with Zhejiang and Shaanxi even stipulating that maternity leave can be increased with each subsequent birth.

Notably, Chinese provinces have rolled out policies to encourage childbirth, but if no supporting measures are put in place to cover some or most of the costs of implementing these policies, not only would female employees likely face employment discrimination, but the goal of raising the TFR would not be achieved either.

Piecemeal policies helping or hindering the cause?

Can the extended maternity leave policy achieve the desired effect? That would depend on who bears the cost of these policies.

The existing 98-day maternity leave has already put women at a disadvantage. Now that the maternity leave duration is longer, rather than encouraging childbirth, it might actually reduce job opportunities for women or make them dread the prospect of taking time away from work to give birth.

To put it bluntly, having children means a decrease in earnings for working women.

Numerous sociological and economic studies have shown that all things being equal, working mothers are paid less than working women who are yet to give birth. This phenomenon is known as the “motherhood penalty.” Sociologists have even discovered that the wage gap between working mothers and working women is already larger than that between female and male employees.

Additionally, working mothers are at a greater disadvantage compared to men and working women without children. Some studies have shown that working mothers are often stereotyped as being less committed to their jobs compared to women workers without children, or are thought of as being more emotional and irrational. These stereotypes have contributed to them getting lower salaries.

A Cornell University study published in the American Journal of Sociology also found that while working women tend to see a salary decrease once they have kids, working men with kids do not face that problem and are in fact better thought of. This is because people generally believe that working fathers are more committed to their jobs.

Under such circumstances, maternity leave extensions and other policies aimed at encouraging childbirth will only render females even more uncompetitive in the workforce, and force them to accept low-wage jobs with little welfare just so they can be employed.

Undoubtedly, such plights do not befall all working women in different working environments. Generally, the rights of women who work for the government or other state-owned enterprises are better protected, and they may be the ones benefiting from policies encouraging childbirth. However, competition for these state-backed jobs is also more intense for women.

Enterprises may not be willing to bear the cost

The implementation of any policy comes with a price. So who will bear the cost of extended maternity leave?

Based on our analyses above, it is clear that it will be borne by the child-bearing female employee and her company. The female employee may be forced to accept a lower-paying job or she may not get a job. Her family will ultimately pay the price of such policies. Similarly, enterprises will not only have to bear the cost of paying employees their salaries during their maternity leave, but also hire employees who may not be as competent to cover their work in the interim.

If Chinese local governments also subscribe to this logic, that is, the cost of such policies should be fully borne by families and enterprises, then only some families that are able to pay the price will choose to have more children, at least in theory. But since the opportunity cost of having children in such families is already very high, it is worth studying how much they desire to have more children. Families that are less affluent, on the other hand, are unable to enjoy the benefits of such incentives as they often face the dilemma of having one more child and earning even less.

At the same time, such policies may benefit male employees even more, forcing female employees to accept lower starting pays and average salaries. And this is indeed true. The China Youth Daily reported in December 2021 the outcome of a survey conducted by the School of Sociology of Huazhong University of Science and Technology.

With a sample size of 7,642 people across 25 provincial-level regions, the survey found that a woman’s chance of gaining employment after giving birth fell by 6.6% after her first child and 9.3% after her second child. Also, having a child reduces a family’s total income by roughly 5.6%, and another 7.1% after the second child.

The decision to have children is a big one. It is not only about family ideals and traditional customs but a profound economic decision. As for the relationship between economic development and fertility, a classic demographic economics hypothesis posits that “development is the best contraceptive.”

This was proposed by the Indian delegation at the United Nation’s first World Population Conference at Bucharest in 1974. It basically means that economic development is the most comprehensive, natural and important factor governing people’s thoughts about childbirth, their behavior and the fertility rate.

Economic development results in a sharp decline in fertility firstly because it increases the opportunity cost of having children. In traditional rural societies, most families generally think that having one more child just means putting another pair of chopsticks on the dining table. But for today’s young urban couples, having one more child means a series of worries such as housing, childcare, education and so on, all of which require money. Where would the money come from? Well, by going out to work, but this also increases the burden on family life.

Next, economic growth also improves the social status and value of women, which makes them self-reliant and less dependent on men. Since this implies that they will be more concerned about achieving financial independence, policies encouraging childbirth may not have much effect on them.

Virtually all developed countries in the West are experiencing declining fertility rates and trying everything possible to encourage childbirth.

For example, statistics from the Federal Statistical Office of Germany show that the country’s birth rate has been lower than its death rate since 1975, with an average of 1.4 children per woman. German population experts predict that Germany’s population size will be down from its current 82 million to roughly 70.8 million by 2050, with one-third of its population aged over 60.

The German government implemented various policies to increase the country’s birth rate, such as providing women who are willing to give birth with a substantial monthly allowance. The German government also grants a monthly subsidy of about two-thirds of the applying parent’s after tax earnings, or up to a maximum of €1,800 (around $2,040) per month, to parents who take time off work to take care of their children. At the same time, the government also proposed the construction of 230,000 daycare centers and an extension of school hours to help working mothers. European countries such as France and Denmark have also adopted effective incentive policies which have achieved good results.

In summary, Western countries are aware that encouraging childbirth is a project that requires systemic changes at every level including finance, taxation, insurance, employment, and child services. The government needs to implement various complementary economic and social policies and packages to relieve couples of childbearing age of their worries about maternity insurance, housing and childcare services. Then only will such policies achieve the desired effect.

China’s current fertility rate is lower than most other countries in the world. By introducing the three-child policy and making major adjustments to family planning policies, the government has recognized the severity of the demographic crisis. The situation now is very different from 40 years ago, when the one-child policy was implemented and it was easy to stop people from having too many children. Now that fertility rates have declined, it is no longer a simple case of rolling out policies that come at no cost to the government — such as the extended maternity leave policy — that will encourage people to have more children again.