Blog: Why I Just Booked a B&B in Kyiv 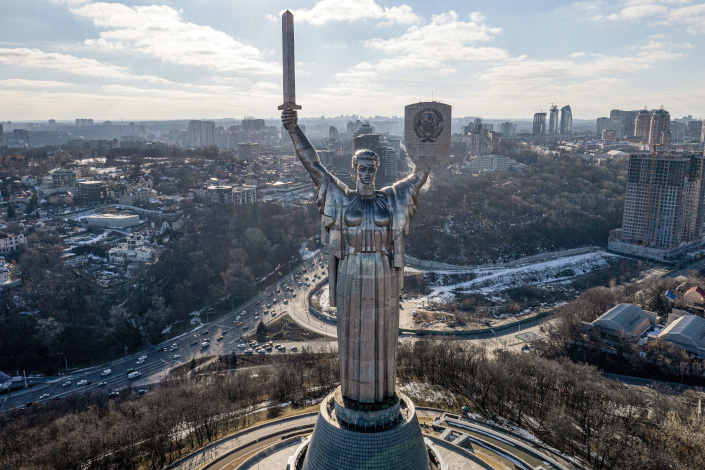 I have booked a bed-and-breakfast (B&B) in Kyiv for six days through March 13. I chose six because it’s an auspicious number in Chinese, and I hope everything will go well over there.

What I was hoping to find was a genuine family-run place, one that locals use to make ends meet, or even a single room in a residential bloc, as long as it is clean and bright.

My ideal landlord was a couple with children.

I live in New York, so Kyiv looks like a small city, and on Booking.com there were only about two dozen listings available downtown. I have been monitoring Google’s live maps of Kyiv. Some mornings I worry that I will see ruins, but every time the city still stands. It has been 10 days since the war started, and Kyiv is still there, while a Russian military convoy is said to have been stranded 40 kilometers (25 miles) away for reasons that are unclear.

Through Google’s live cameras, I have been able to lay eyes on this very foreign city, with its buildings, waterways and fields unfolding in front of me. I scoured the accommodation listings, purposely looking further down the list, hoping to avoid putting any of my money into the pockets of the big hotel chains.

Before finalizing my order, there was a prominent note on the website: “This geographic location is currently under armed conflict, which may increase security and human rights risks for guests and local communities. Please review the travel guidelines provided by your government for this region and make a well-informed choice of accommodation.”

The situation is so chaotic that I saw a hotel declare that it has air defense facilities in the building, “but not only for hotel guests.” I contemplated this for a long time.

The hotel also thanked the 12 volunteers who supported them in this difficult time. At a glance, the list has two Chinese surnames.

I chose a place called 911 Flat Kyiv Center, which was further down the list, whose profile states that it has been available for booking since Oct. 4, 2020. The photos of white sheets in a simple and neat room hit the mark for me, and it also fits what I imagine is a family-run business.

I hope that one day, after the war, I can stay at this place for real.

I decided to rent a room in Kyiv after Tommy Marcus, a 26-year-old vlogger in New York, called on people on March 2 on Instagram to book an Airbnb to help Ukrainians. His call was followed up by countless others, many of whom specifically picked parts of Ukraine most affected by the war.

Within a day or two, people answering the call had booked 61,000 nights in room in Ukraine, effectively raising more than $2 million for people with Airbnb listings in the country. About half of the bookings were done from the United States.

Martiusheva, an Airbnb host in Kyiv, told reporters that this “support booking” means a lot: “These days we don’t have any income. We have no right to ask for help from our country, because all resources are used for war. Now in Kyiv only pharmacies and supermarkets are working, everything else has stopped. People are just surviving on their own savings, that’s all."

I had booked a B&B in Kyiv, but I had no idea where it was. I looked at the hotel literature so I could find it on Google Maps. I knew that there was a thoroughfare running right behind the building, next to the Armenian Embassy, and an unexplained path that seemed to cut across the building, so I wondered if it would lead to the apartment building.

Across the street was a green space called the Golden Gate, which I used as a signpost in my mind since I couldn’t even find the orientation of the apartment building.

I can’t imagine being stuck in a city with no mail, no safe roads, no commercial flights, expecting a sudden change of heart from someone in Moscow. It seems so hopeless.

Maybe my landlord has left for Poland as a refugee?

Maybe the whole apartment building will soon go up in smoke?

I didn’t realize until I checked out that what I thought was the price for a single day was actually for the full six-day stay, and I was shocked by the modest amount. I knew that Ukraine was a developing country with a GDP per capita that was almost the lowest in Europe, but I didn’t know the difference was so outrageous.

The Dnieper River that runs through Kyiv clearly splits near my building, merging into a blue-green patch of water and earth. When I watch what’s going on in the city on the live cameras, I heard birds chirping.

I never thought that such a strange and distant place would become my biggest worry.

When I made my reservation on the website, I noticed that half of the hotels in the city were already fulling booked.

On Twitter, I kept getting alerts about messages from an account called Ukrainian Uncle. After reading his profile, I could tell that he was a Chinese man living in Kyiv. On Saturday, he sent one of his usually brief tweets: “Woke up in the middle of the night last night, more than 95% of the families have evacuated Kyiv.”

Those who have left, where did they go?

Those who didn’t leave, why did they stay?

After the room was booked, I found a place where I could leave a message to the landlord. “You are friends I have never met, I am a Chinese living in the United States, and I booked this six-day apartment stay just to tell you that I love you. After the war, my son and I will go to Kyiv, and when we do, I hope to stay in your apartment again.”

Within seconds, I received a reply: “Thank you very much, this is very important to us now. We appreciate your help from the bottom of our hearts.”

Honestly, this startled me.

I didn’t know if they were in an empty building, or if they were already crowding the bridges and stations with other people.

It brought tears to my eyes.

I won’t be going to the B&B I booked in Kyiv, but I feel like I’ve already been there. Imagining I was there, I wondered about the 5% of souls still left in the city, talking to myself as if I were talking to them.

I don’t know if the landlord is among the 95% who evacuated from the city, but I can imagine how they will come back after the war and see whether the home they had spent half their lives in is still intact.

I have booked a bed and breakfast in Kyiv. I hope have distantly contributed some hope to the people ravaged by war. I’m touched by the sound of birds chirping in the war-torn city.

Wait for us, please.

Chen Yanni is a journalist and writer. She grew up in Beijing and is based in the United States.